Coming to America. Feels like home for the Quantum Racing team

Quantum Racing did not finish last season the way that they wanted. For all that the early part of 2012 ran to script for the team which is lead by America’s Cup champion Ed Baird, towards the end their challenge for the inaugural 52 SUPER SERIES title was derailed by a combination of bad breaks and an Azzurra team which had a seemingly unstoppable momentum.

Lessons have been learned, small changes made here are there and the Quantum Racing crew are ready for the 2013 season, one which the past double MedCup champions start out on what could be loosely called home waters.

If, in fact their boat is only racing at Key West for the second time in its life and spends the vast majority of its time in Europe, for the majority of the Americans on board, like Baird, strategist Andy Horton, Andrew Scott and match racing world champion Matt Cassidy who grew up just up the coast, this is as close to a home

52 SUPER SERIES regatta as there is.

Racing at Quantum Key West 2013 in Quantum colours may carry a certain responsibility, but considering that until owner Doug DeVos and Quantum stepped in from last year to support the event which otherwise was struggling, the race crew say they feel little extra stress at this stage, other than making sure they do their jobs well and to work towards the experience proving as enjoyable for all as it should be.

Team owner DeVos will steer at this regatta with Baird sailing as tactician, backed by Horton as strategist

“ The objective is to have a week which we can look back on and say, that was really good, that was fun.” Skipper Ed Baird leads, “ That is number one priority. If we won the event than that would be fabulous. But more importantly it is about just trying to get better every day and see where we end up.”

But to have finished second to Azzurra last season hurt, Baird recalls:

“ At the end of last season it was a bit tough for us. We had an injury to Brett Jones who had to get off the boat and we never quite got our mojo back in setting up the boat well. And we had a breakage in the next to last event, and that kind of set things in motion to end the season on a little bit of a down note for us. Obviously we hope to improve on that. We have changed a couple of people on the boat, not because of how we finished the season but because of availability. We have Piet van Nieuwenhuijzen with us now, and our grinder was with Oracle and is fully committed there now so we have Jim Turner here. And then we get an extra space on the boat, so here we have friend of Doug’s sailing with us and that will be fun.”

“ The pressure here is less, don’t Quantum get mentioned every day no matter how we do?”

But he pays a warm tribute to owner DeVos:

“ Really this was said last year a lot, but I reiterate again here.  This event has been a fantastic event for a lot of years, and a couple of years ago it looked like it was going to disappear. And so it is great that Doug DeVos and Quantum were able to come in and become title sponsors and keep the event moving along in such a great way.”

“ I am so happy the event gets to continue and we get to be down here and enjoy some great sailing. The fact that are so many different types of boat here, and so many people who are excited to be here coming from colder climates, and from far way to get the season started. It is very special. Here we have everything from the J/70 which has had a fabulous start to the 72 footers. There is something for virtually everyone. And for those for whom the racing is maybe not the first priority, there is plenty for them to do here too.”

“ I love it here. In January where I live it is dry, raw and bitter cold. And every year when you land here and they open the door of the airplane, there is the warm humidity that hits you, and that brings a certain calmness. I think when you get typical Key West conditions, it is the best sailing venue in the world. You get 15-20kts, a nice sea state, it is a really, really nice race track. I love the ability to be here and showcase this in my home country.”

“ And it is fantastic that the 52 SUPER SERIES is here. I am proud of the image of Quantum Racing and that there are a lot of people in the United States who follow Quantum Racing and so it is such a pleasure and an honour to be able to now bring it to America.”

“ And so after those years of being in countries where owners have said they will come to the USA, here we are and it is good also to see some of these American boats going to Europe this season for the first time. The 52 SUPER SERIES is a big challenge in terms of viability, trying to get it all together. But this is healthy for the 52’s, I think this is healthy for sailing. There are a lot of cool boats out there, but these are still the coolest.” 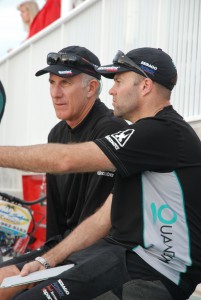