The impressive form of defending champions was apparent throughout the seven races sailed. Azzurra topped the table with 21pts, four points up on Quantum Racing, which has Dean Barker steering, while World Champions Platoon – the only new Vrolijk design in Palma among the seven new boats – finished third.

Winning PalmaVela can be an indicator of the shape of things to come. When last there was a crop of new build boats, in 2015, it was Azzurra who won the Palma curtain raiser in early May and went on to win the season. In 2016 Quantum Racing took the victory in Palma and took top honours for the circuit. But in 2015, Quantum Racing sailed their season with three alternating helms and did not hit their stride until the middle of the year.

Azzurra had an advantage in terms of pre-season prep and training – they launched early in Valencia on March 14th and sailed there with a full team including new tactician Santiago Lange before training off Palma – but what was noticeable was that all of the Botin designs are almost identical except for a few small details.  It was also obvious through the four days of racing that the 2018 fleet will be closer and tougher than ever. The differences in speed are smaller than ever and, especially, the edge that the top three teams had before is now negligible. Any team can win regattas and – from this standpoint – any one of six teams could win the 2018 season. 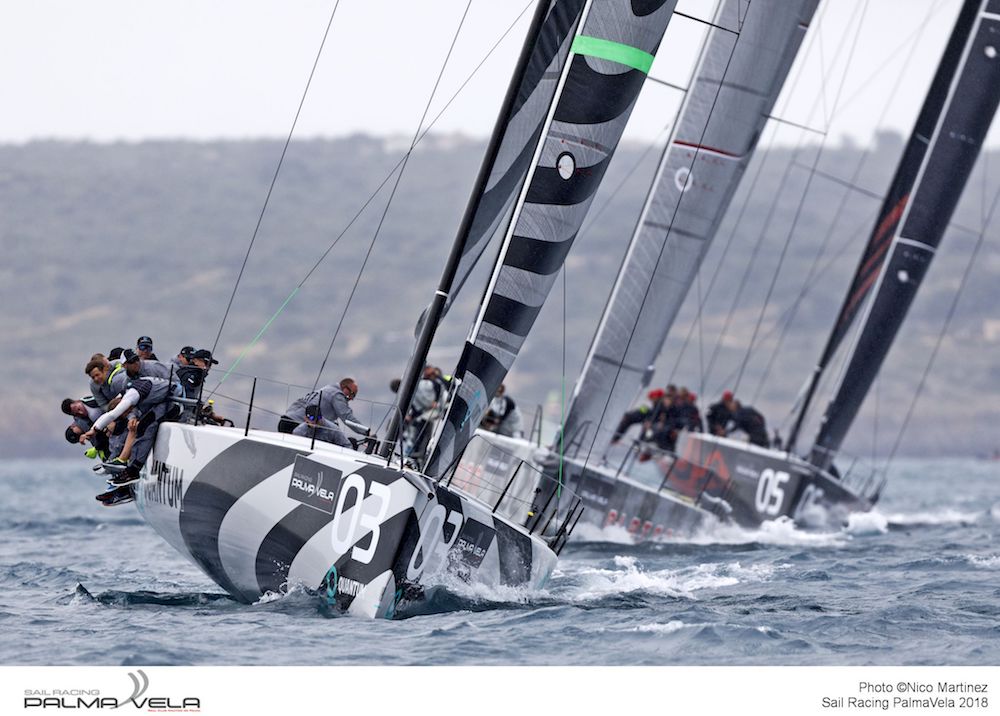 Quantum Racing sailed smart, Barker and the afterguard starting the boat well and positioning themselves well around the race course, compensating for their lack of time with the new boat. They only had two days of training before racing started. And by all accounts the new Platoon appeared to deliver what owner Harm-Müller Spreer had requested from the Vrolijk design office – better upwind speed and height. They had to re-start twice, and still finished third overall, making a second in the penultimate race after one such transgression.

For Azzurra there is no room for complacency. They are working hard and several times stayed out late after racing to test new sails. Skipper-helm Guillermo Parada noted:

“It was a very challenging week in tricky winds especially considering we were bringing Santi in, but he and Cole [Mariano Parada] did a good job picking the right sides. Our performance in the light airs was competitive. I think we cannot draw too many conclusions from here. The strong teams are still strong and it will be a long season. It is a relief for us that the decisions we made before and during the winter are all working and that we are not now having to reinvent the wheel. We had time after training in Valencia to build some racing sails and then use them here in these last days. The boat is going well.”

Considering that the new Quantum Racing was relatively late compared with their hopes and aspirations, they sailed well and pushed Azzurra at times. The match racing events that Terry Hutchinson, Dean Barker, Greg Gendell, Sean Clarkson and James Dagg have been doing have clearly served them well in terms of communication and boat on boat work. They raced the boat well and now only have to learn how to get the best from their new machine.

“I think the team’s performance was very positive considering they had only a couple of days with the new boat before the first race and we are playing catch up compared with Azzurra, Sled and Phoenix, who have sailed more and are more sorted.

We made progress and collected a lot of data. The key gains are to be made learning the upwind modes. We still are learning the trim and when to make the mode changes.”

Platoon’s owner Müller-Spreer was especially happy with the new Platoon’s upwind speed. They were second going into the final day but finished two places behind Quantum Racing in Sunday’s one, and only race in light winds, dropping to third. Their tactician John Kostecki reported:

“We are very happy to be here, and happy with the boat. We were late with the build, so the shore team did an amazing job to have us ready and able to do some sea trials and get through the regatta with no major problems. The boat seems really fast and if we sail well we can do very, very well. We are quick upwind and are about the same downwind. We have to keep learning; the boat, it is so different from the last boat. We just need to keep trying to improve before the first regatta.” 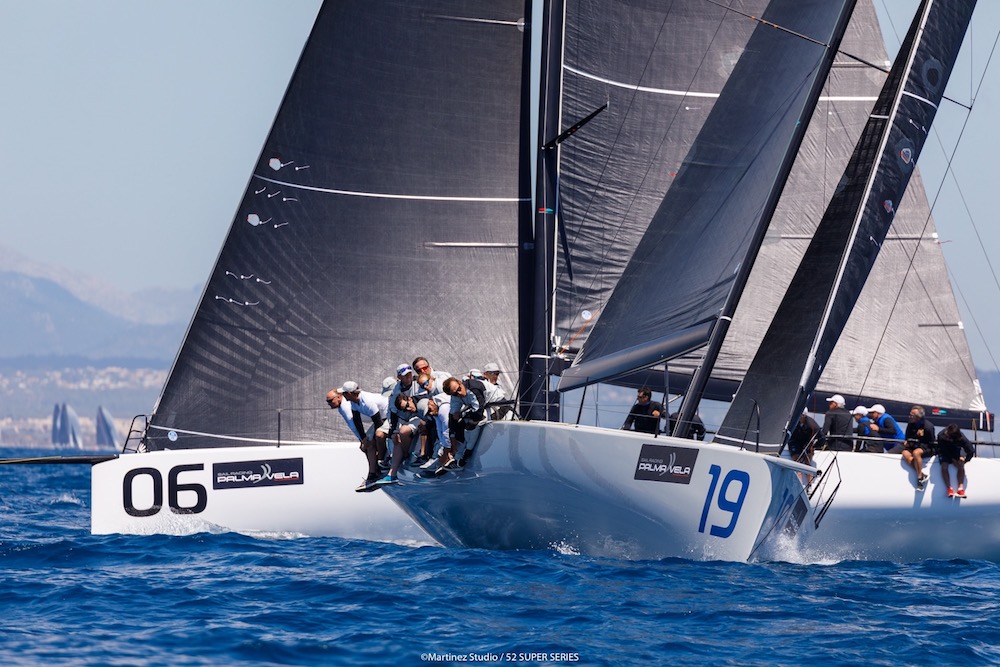 Takashi Okura’s Sled finished fourth overall, finishing strongly with a 1,2,3. They were the first of the new boats to launch, sea trialling and training in New Zealand, where she was built by Core Builders Composites.  New tactician Ray Davies affirms:

“We are very pleased to have improved as the regatta went on, and to finish up with a second in the last race was great. The team is gelling well. We can keep improving our starts and tight situations with other boats, a lot of that is communication. We need to keep learning and refining the systems, these are now very complicated boats. We have some new sails coming. The boat is going really well.” 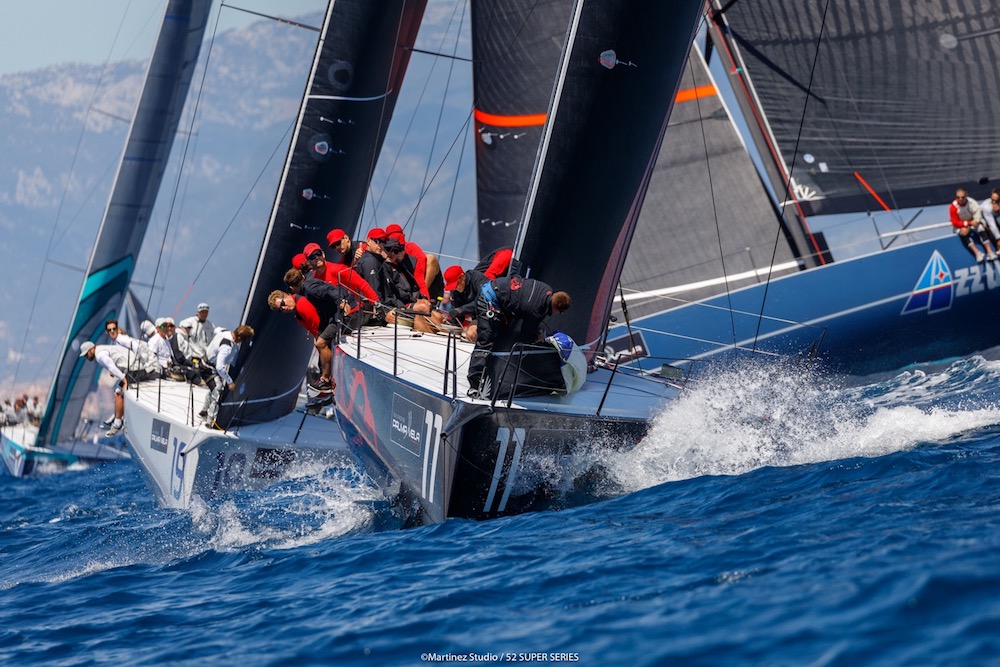 The two Plattner-family Phoenix boats had the benefit of the best part of ten days of two-boat training and testing before PalmaVela started and came out of the blocks showing some polish and a lot of promise. Hasso Plattner and daughter Tina Plattner will share the helming role over the season, each doing different regattas, and they have not ruled out both boats – the new 2018 Phoenix and the 2014 Phoenix – doing some regattas. The new Phoenix has an older rig, which was built for the other boat and the new rig is not expected until June.

“The thing is that the new boats are now so close. In past years when we saw a number of new boat launches, someone had an edge, but now the new Botins are pretty much the same, so it even comes down to the rig and sails.”

The two Phoenix teams worked up to the regatta with coach Ron Rosenberg but through the season they will be coached by Cameron Dunn. 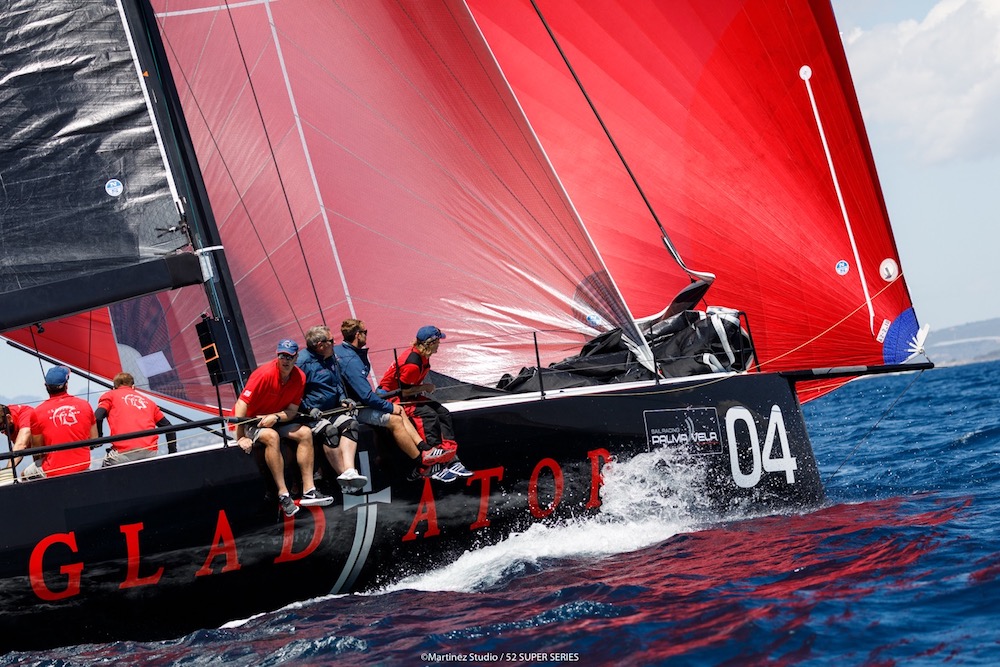 Following the breakdown of the initiative with Sir Ben Ainslie and the former Land Rover BAR team, Tony Langley’s Gladiator sailed with Ado Stead as tactician, as a one off. They were strong in the first half of the regatta, but owner Langley was happy with progress, considering. Owner-driver Langley left the regatta commenting:

“I always enjoy it and I think we are in reasonable shape. It took a bit of getting our mojo together. But this boat still has legs. We had good straight line speed. I am very happy with the boat. We are disappointed to say the least about the situation as it developed, but we are just trying to figure out where we go from here.” 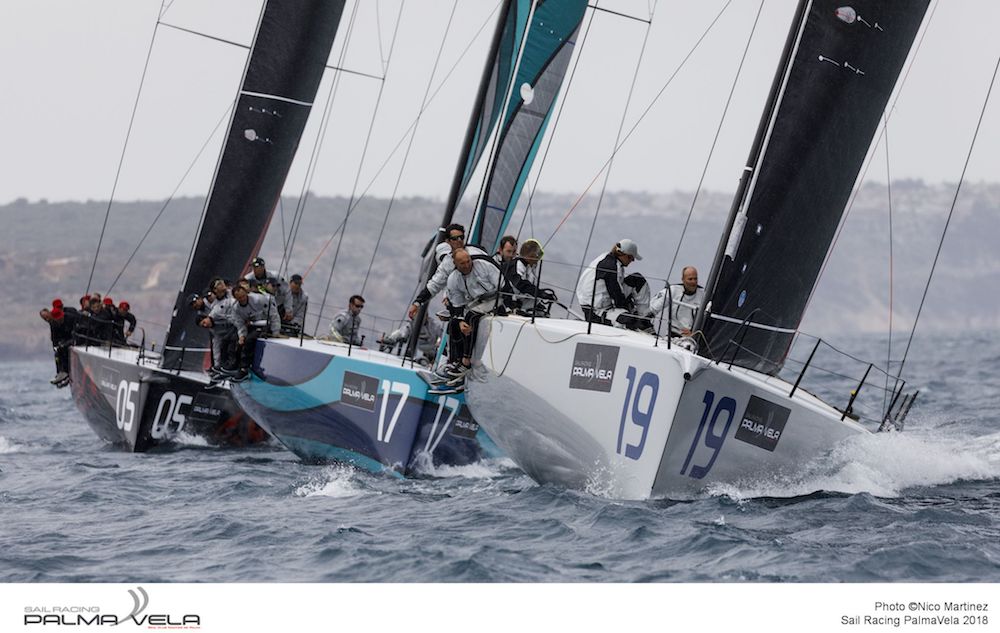 Andy Soriano’s Alegre showed bright spots of potential, finishing second in the first race, but tactician Andy Horton debriefed that they are still too much in the learning-their-new-boat phase to have been really competitive. 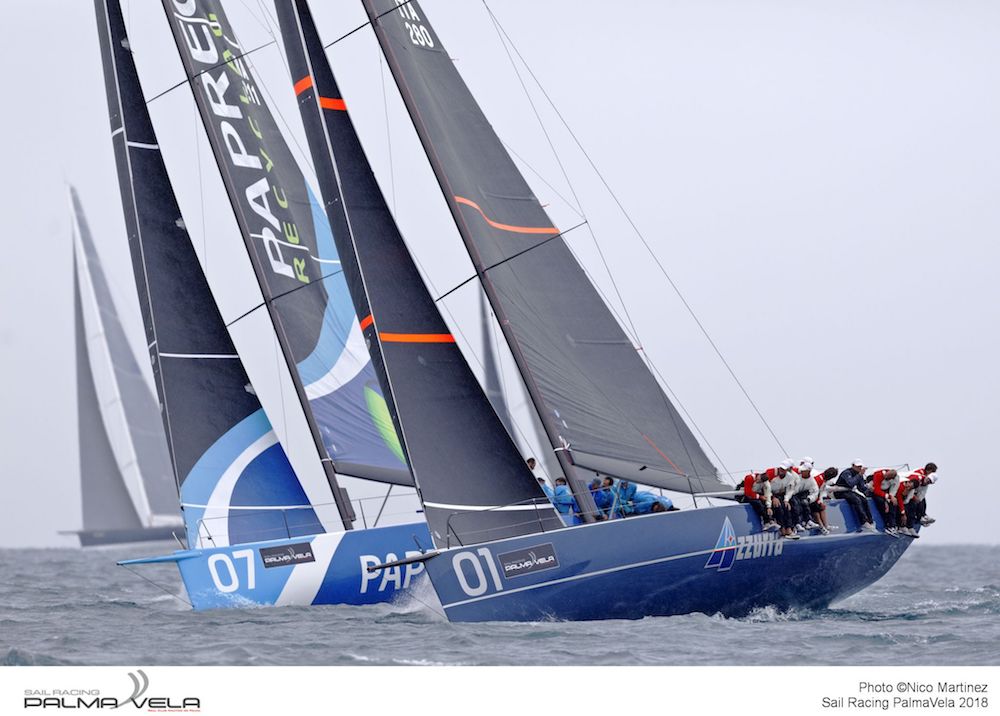 “We are still learning in the new boat as there a lot of differences. We just got the boat on the Saturday before the regatta and so there is a lot to learn.” 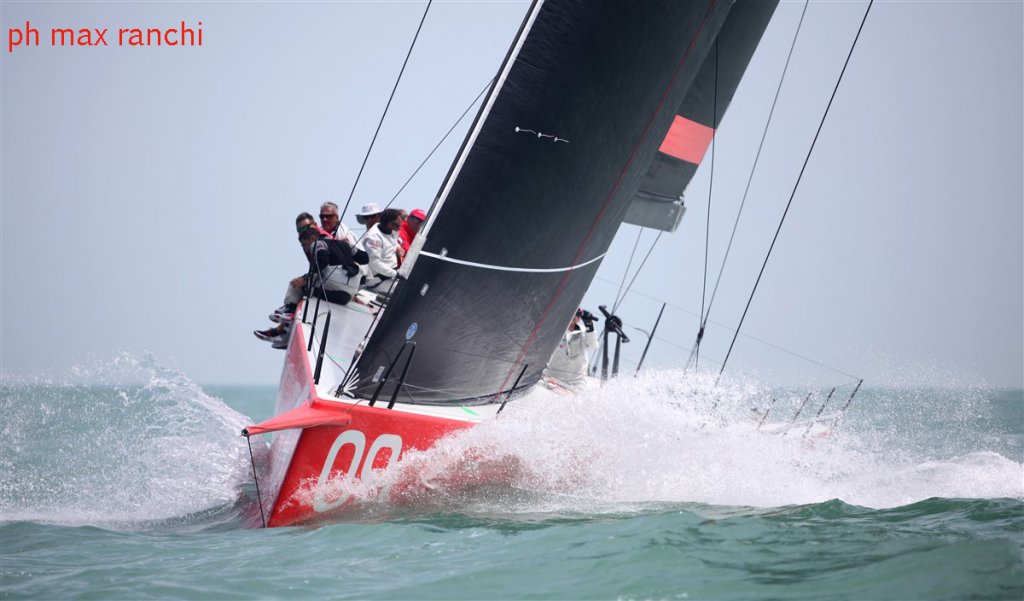 At the same time as PalmaVela was getting under way, in Ancona, Italy the new-look Provezza was undergoing sea trials and was undoubtedly launched amidst a party atmosphere. Also sea-trialling and launching over these past few days were Luna Rossa – bow number 46 – in Trieste, Italy. The event attracted a lot of attention in Italy, and has only heightened the anticipation surrounding what will be the most competitive season in 52 SUPER SERIES history. 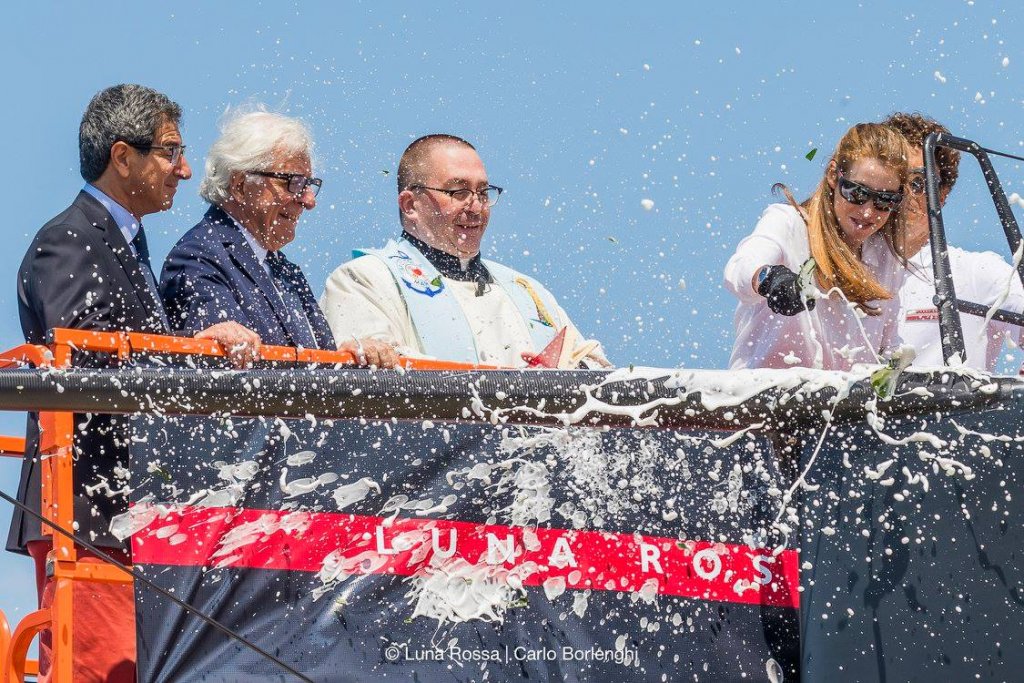