Champions Azzurra Are “All Systems Go” For Title Defence

(Tuesday 3rd April, 2018) – After launching their new boat on March 14th, and now with two weeks of sea trialling and training under their belts, the 52 SUPER SERIES champions, Azzurra, can contemplate the coming season and their goal of retaining the overall title with some hard-won confidence.

The boat is the first to be launched in Europe, the second (after New Zealand built and launched Sled) of nine new builds. It was built at King Marine, as were the previous Azzurras, launched in Valencia, and is just being delivered to Palma where she will be based.

“Our boat is going ‘home’ now and we are happy about that,” smiled Parada, adding, “It’s pleasing that everything went to schedule. We could have launched on the 13th [of March] but of course we would never do that!

We had a really good week of training, with six to 30kts, with the full team. We were very lucky about that. It was very productive.”

Although the Azzurra crew – who have now won the 52 SUPER SERIES title twice – will miss charismatic, long-time tactician, Vasco Vascotto, who has taken up a role with series debutants, Luna Rossa, the two Italian-flagged teams will be working together very closely. They share sail programme information under Argentinian designer Juan Garay. And members of the Luna Rossa team, including Vascotto, spent four days with the Azzurra programme in Valencia during their training week.

“All the small improvements add up. We reviewed everything before we started with this new boat. The boat is a lot simpler but the key thing was really to reduce the loads as much as we can – so there are more wheels and more efficient retrievals and things like that. What you are striving for is to make small adjustments easily and efficiently and we feel like we have that.”

Among the small gains Azzurra has revealed is in the new rig, which is said to be another 10 per cent stiffer on the previous boat’s. The winch package saves 30 kilos on the preceding boat. They have a new jib Cunningham System and forestay attachment system, which is reported to be different for the class so far.

Parada is content with their choices and says he has avoided generating concerns about what the other eight teams with newly built boats are doing.

“We have no idea what the other boats have got. We have what we like and that is what is important.”

The Valencia week welcomed Santiago Lange into his role as tactician, replacing Vascotto and the return to the team of America’s Cup winning trimmer Grant Loretz. 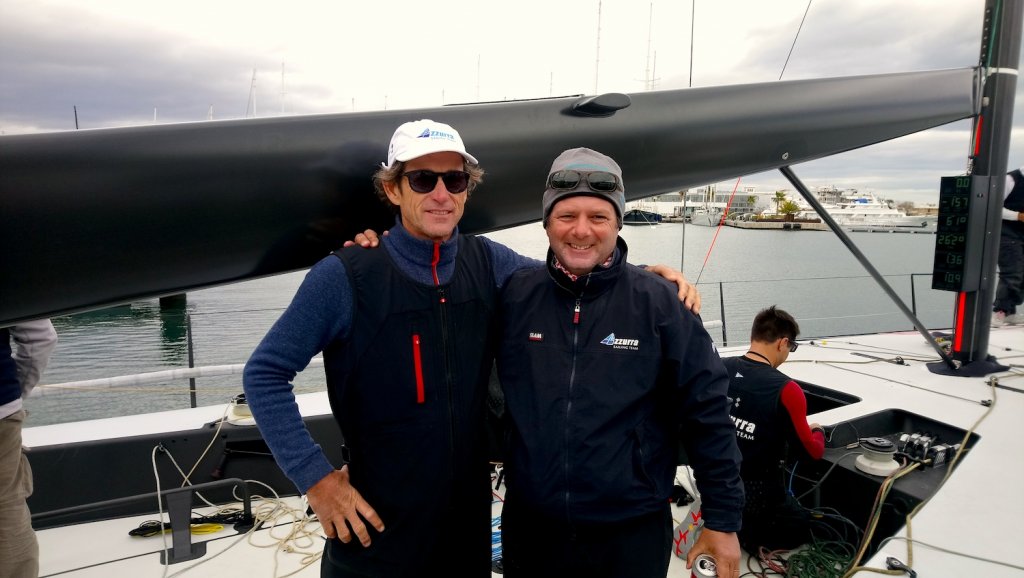 Three-time Olympic medallist Lange, who won gold at the age of 54 in the Nacra 17 in Rio, and who subsequently was given the Rolex Sailor of the Year award, has always been close with the Roemmers family’s team, and sailed on the TP52 Matador in 2010. In fact, during his Nacra Olympic programme he was supported by coach Mariano “Cole” Parada, who sails on Azzurra as a trimmer. He has considerable experience in the TP52 Class, dating back to 2006, and more recently sailed as tactician with the Brazilian team on Phoenix in 2015.

“It was an easy, natural choice to bring in Santi. Of course he is Argentinian and so shares our cultural outlook and fits in easily. He brings so much experience, but of course he is very different to Vasco. He is very relaxed around the team and easy going and gets on with everyone but is a very fierce and competitive winner on the water. He wants to win and he knows how to win and of course has a great technical knowledge too. He is involved with everything and will be pushing hard.”

The Luna Rossa is a sister ship to Azzurra, which is expected to be launched about ten days before the warm up regatta PalmaVela 3-6 May 2018. The two will work up to this event together and through the season, sharing data but running their own coaching operations. Azzurra will bring new sails to PalmaVela.

“We know we will face a lot of competition this season, with new teams and the level stepping up even more and many with new approaches. We have set our goals for success and will be doing all we can possibly do to achieve them. And our target is to hold on to that bow number 01! We don’t intend to give it up!”