(Sunday 1st March, Cape Town) – High hopes and expectations of a breezy introduction to Cape Town for the 52 SUPER SERIES were left on hold today as the Official Practice Race, the prelude to the 2020 curtain raising Odzala Discovery Camps 52 SUPER SERIES V&A Waterfront – Cape Town had to be abandoned due to very light winds.

IT'S HERE! The first event of the 2020 season takes us to the City of Cape Town for the Odzala Discovery Camps 52 SUPER SERIES V&A Waterfront – Cape Town. Racing starts on Monday 2nd March, stay tuned!!

The forecast for the week-long regatta, the first ever in the Southern Hemisphere for the 52 SUPER SERIES, does promise a heady mix of a little bit of everything. Tuesday’s first races should be contested in a light winds, which are forecast to freshen up in the afternoon.

For the hosts – the Plattner family’s Cape Town based Team Phoenix – there is immense pride in having the fleet visit their home waters. Local Cape Town sailors never in their wildest dreams expected to ever have a TP52 fleet regatta raced on home waters, sleeping in their own beds each night.

“I never ever thought we would see the TP52s racing as a fleet here on our own waters. It is absolutely amazing to have all ten boats out here. It has been a real dream of mine to do well in the TP52 and so it would be great to do so here.”

“It is absolutely fantastic for South Africa and for Cape Town. It brings a new high level of yachting to Cape Town and that is fabulous. The local people have seen the Volvo Ocean Race come on and leave again from here, but the 52 SUPER SERIES is a whole different level. Everyone here can’t wait to see the racing.

There are some high expectations from our friends here in Cape Town that we have to try and live up to. But there are always opportunities in this series because it is always so close. We know the Bay well and know how difficult it can be and so we want to put that to good use. I think we will have a good range of conditions.”

Of the possible weather ahead this week, Sadler adds:

“I think we will have winds all the way through the range this week, from a light medium start tomorrow to fresh in the later afternoon, then it can be quite light later in the week. This week will be about the most consistent team, the team that reads the changes best in the breeze and the current and puts the whole package together.”

“It is so awesome to see all the owners and the teams here and so I would like to thank everyone for making the effort to get here. I am sure we will be rewarded by some good sailing conditions.”

Asked if she felt pressure to make a best ever result at the home regatta she smiles:

“We just want to sail well for everyone here at home and have fun. I want everyone to have a good time and enjoy being here. We have been doing a few days training here and feel good. I think we have put two good teams together. I would like to think there might be some local advantages but at the moment even we seem a little confused with what the breeze has been doing recently. To be honest, though, I am not sure we are used to being on the water here for so many days in a row.”

Through the pre-regatta training period, the race area has proven complicated and challenging with many small shifts in wind direction and light patches to be avoided. Typically, suggests Azzura’s championship winning strategist Cole Parada, this will not be a regatta that will favour low risk percentage sailing.

“They always say that ‘you can’t win a regatta on the first day, but you can lose it’ so tomorrow we will be trying to avoid big mistakes and minimising the risks.”

“The race course seems to be quite tricky, so it’s not going to be easy to play it safe because there are big puffs and holes everywhere, so at some point you have to just follow your gut feeling and go where you think the breeze is going to be – it’s going to be interesting to race here. Training has been so far so good. We achieved what we wanted to achieve development wise: the rig is looking perfect, the new sails are looking good. In these conditions, it has been really hard to test against other boats, so it’s completely open.”

“From last season, we learned that we have to trust each other more. We have had a great team and this has been a great programme for many many years. Now we have a little bit more familiarity amongst the team. And we’ve got Michele Ivaldi joining us and he has sailed with the team before. We know each other’s style. We’re here to win and advance our score for the season, but it’s each race at a time really because the fleet’s tight, it doesn’t take much to put a foot wrong out here. Last season things were within our reach at times, and we let some stuff slip at times. It is about making sure we have learned from those mistakes and building on our strengths.”

On Saturday, Ergin and Nazli Imre and their Provezza team hosted a group of youngsters from the the Skipper Foundation who travelled 400km to visit the regatta, get on board the TP52s and learn more about sailing.

The mission of the Skipper Foundation is to teach and develop sailing skills for vulnerable youth groups from underprivileged communities. They achieve this through sponsored training courses presented by volunteer experts. The sailing environment sets the platform for young people to learn technical and soft skills as well as commitment, discipline and ethics, which prepare them for national and international employment opportunities in the marine industry. 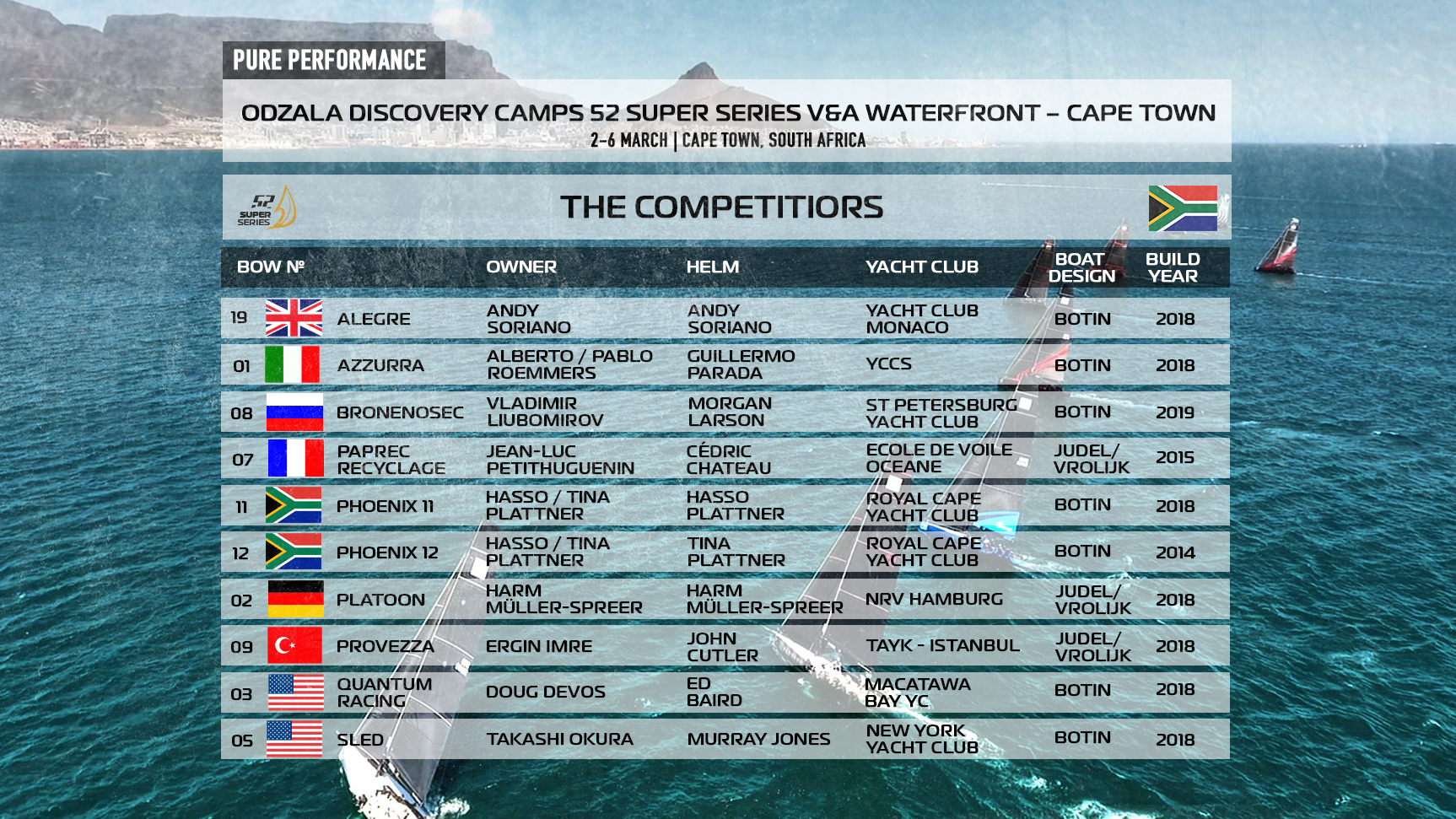 Racing at the Odzala Discovery Camps 52 SUPER SERIES V&A Waterfront – Cape Town starts on Monday 2nd March and finishes on Friday 6th March. Track your favourite teams through the 52 SUPER SERIES app and Virtual Eye player. All shows will begin 15 minutes before racing is due to start and can be enjoyed at www.52SUPERSERIES.com or via the app.

The 52 SUPER SERIES Sets Its 2020 Vision for Sustainability

The Cape of Dreams

Azzurra On the Cusp of Cape Town Success