Can Rán Do A Miami Re-Run?

Strong winds and big seas off Miami Beach over recent days have curtailed the essential pre-regatta training period. From early in the day on Monday, it was obvious that the official practice race would be cancelled with the wind gusting between 25 and 30kts on the race course.

Sadly, the French Paprec team of owner Jean Luc Petithuguenin will not be able to participate at all at this second regatta of the six-event 52 SUPER SERIES season. When they were training in big seas on Saturday, their mast broke.

“We are so disappointed. We had had a good regatta in Key West and felt we had made good progress with some new crew on board, and we intended to go and race in Saint Barth’s after here. We are looking at all the options to find another mast to be able to carry on racing in Europe.” explained skipper Stéphane Neve.

The return to the Miami Beach venue is a popular one for the 52 SUPER SERIES fleet, racing for the Royal Cup. The prestigious trophy was founded in 1995 for the IMS 50 class by King Harald of Norway, Pasquale Landolfi, Willi Illbruck and Yannis Costopoulos and has become one of the most sought after awards available each season.

Miami is special for Niklas Zennström’s Rán Racing team. They won the TP52 World Championship here in 2013, beating Azzurra on the last leg of the last race to clinch the title.

But while the Rán Racing crew are in confident mood after a strong third overall at Quantum Key West Race Week, tying on points with second place, tactician Ado Stead is under no illusions as to what it will take for a Rán re-run of 2013.

“Yes Miami is a bit special for us.” Stead agrees, “I think the level of the fleet is really incredible now. But I would maybe say that and then look around the dock here and there are so many good people here. I think it is a special place for so many people in this fleet. So many others have won here in different classes – world titles, Olympic classes, Farr 40s, and so on – because we have all sailed here so much. It really is a great place to sail.

The goal is the season title, though.

As Quantum Racing proved on Day 3 in Key West, everyone can have a bad day. The key to winning the season is to have 30 great days of racing chipping a point here and there wherever you can, that makes the difference.”

Stead knows they can be contenders again in Miami and relishes the additional challenge of what is expected to be a choppy, bumpy race course – at least in the early days of the event.

“We know going into Race 10 in Key West we were in with a good shout going into the last race. We were three metres off crossing Azzurra and that changed the final outcome. It is so close. All of us in the fleet are looking at where we can gain a metre here, a metre there.

This is a challenging venue. The breeze will moderate, but it will be a choppy venue in the SE’ly winds. Key West was relatively flat. That is another dimension, one more variable. It means the top mark approaches, the starts, will all be a little bit harder to judge. It will be just a little bit more difficult, which is good because that is what our sport is about.”

The foreshortened training programme does not help the cause of Tony Langley’s Gladiator team, nor Peter Harrison’s Sorcha crew. The Gladiator crew have had very little time together with their new boat – the new build former Interlodge – and the Sorcha team were looking to maximise their time on the water leading into their first regatta of their 52 SUPER SERIES season. 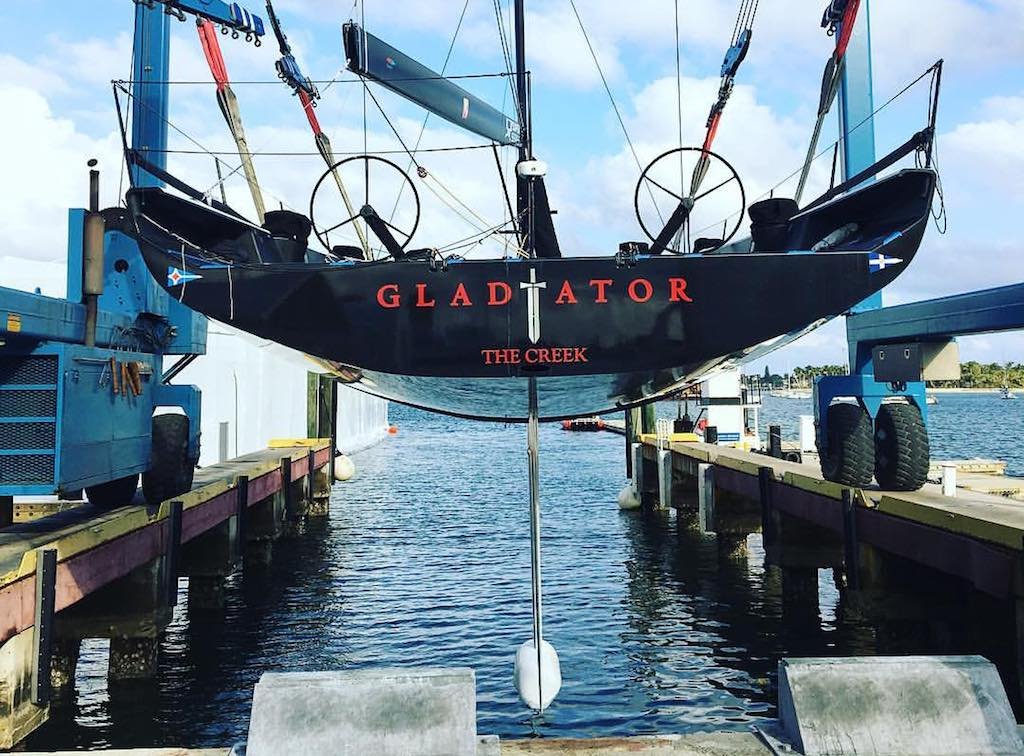 “We were given the opportunity to check the systems and look at some of our sails before this event, so we’ve been out sailing. But we really haven’t been able to sail against anyone. We know from watching the boat as Interlodge at the 2017 Quantum Key West Race Week that they had moments of going really well and on average seemed to be pretty happy on the racecourse, so we’re excited to have an opportunity at the next generation [of TP52 design].

The change from a Vrolijk design to a new Botín Partners design development of Quantum Racing, the world and 52 SUPER SERIES title winning boat, offers new opportunities for Baird, Langley and the Gladiator programme.

“The number one thing is when we have a good day or a bad day we can look at it and understand why. If we have a similar piece of equipment to Quantum and we’re able to sail around the course with them and make a mistake and get beat, we know it was the mistake. But if we don’t have a similar piece of equipment, we’re not ever sure if it’s something we’re doing or it’s the equipment that’s doing it. And the hope is that we can just take that out of the equation. We shrink down the variables. It’s very important in sports like this that you take away the variables. We know for sure, there’s no question, that the Judel-Vrolijk boats perform in certain conditions better than the Botín boats. And we also know in no uncertain terms that the opposite happens as well. What we’re hoping is that we get more of the Botín conditions than the Judel-Vrolijk ones.”

Racing is due to start on Tuesday at 1500hrs local time (EST, 2000hrs UTC). Two races are planned Tuesday. Live commentary and boat tracking via the Virtual Eye is available Tuesday and Wednesday. 52 SUPER SERIES TV powered by Quantum Sails goes live THURSDAY, FRIDAY, SATURDAY with live action streamed from the race course supported by tracking, commentary and comment from 15-minutes before racing starts each day.