After triumphing with a consistent display in Key West in January, Azzurra seemed to have continued in their winning ways today when they made the strongest opening to the Gaastra 52 World Championships in light and very challenging conditions off Miami Beach. 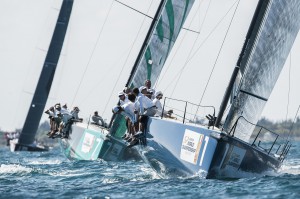 Azzurra’s effervescent tactician Vasco Vascotto is on something of a winning run, backing up that 52 SUPER SERIES win in Key West with an overall world title win on Pisco Sour in the Soto 40 class the following week in Chile and then a Melges 32 regatta win in the Caribbean.His form held firm across two very difficult races today, contested in light SE’ly winds which saw big shifts in direction as well as pressure, especially in the second race.

In Race 1 Azzurra, with owner Alberto Roemmers Jr steering, were able to get the better of the close scrap with Tony Langley’s Gladiator on the second beat, holding on to take the first winning gun of the five day regatta. And while Gladiator were clearly the best starters of the day, they were unfortunate to find a big hole in the light breeze early in the second race.

Vascotto was able to engineer an escape route from the same sticky light patch which had snared four unlucky 52’s, only just allowing the Italian flagged team to give chase after Niklas Zennström’s Rán Racing which had built an early lead on the right side of the course. Rán Racing went on to win the Race 2 with Azzurra second. 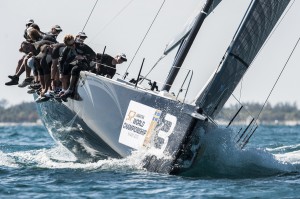 With what is forecast to be the lightest day now completed, Azzurra holds a lead of four points ahead of the three times world champions Quantum Racing. The American crew’s starting was less than perfect today but their talent and determination showed as they ground out a couple of decent scores – 3,4 for the day – to keep themselves in contention. Ed Reynolds, the team’s project manager rounded up their day:

We were incredibly average today but we came away with a third and fourth and that keeps us in the hunt. We will be able to get out of this. But it was really scary out there, big holes and puffs, really shifty. Azzurra did a great job today, their starting ability is good but the rest of us were all over the board.
Ed Reynolds, Quantum Racing

In the second race Manouch Moshayedi’s Rio team sailed a great beat and were able to round second just ahead of Azzurra and Quantum Racing, but Azzurra’s gybe set into better wind pressure ensured they were able to pass before the leeward gate. Third place for Rio in Race 2 gives the mainly semi-pro and amateur team a fillip at their first 52 World Championships, their second regatta with the boat which was formerly Synergy.

Rán Racing lie third overall but Zennström’s team will be looking to more regular results through subsequent days after they opened with a seventh place before bouncing back with that win in Race 2.

It was a really, really tricky day today because the wind was up and down in pressure and with big shifts, more than 45 degrees of shifts and from six knots to 11knots and really, really hard to read on the water. But we had two very good starts and only really in the second race did we miss out on the first pressure in the second race and we could not get back from there. Overall we sailed a nice first race but the good thing on the Gladiator is that we are improving all the time.
Michele Ivaldi (ITA) navigator Gladiator (GBR)

Today it was very tough conditions but we were incredibly average today but we came away with a third and fourth today, it keeps us in the hunt. We will be able to get out of this. But it was really scary out there, big holes and puffs, really shifty. Azzurra did a great job today, their starting ability is good and the rest of us were all over the board. Coming out of the day with a 3,4 we are fine with that.

I have never seen spread out like that before in this fleet. We rounded the last run with Gladiator maybe five boat lengths ahead and beat them by probably 40 and that was not a skilful thing, that just gets dictated to you by the weather gods.
Ed Reynolds (USA) project manager Quantum Racing (USA)

The key was to stay in phase with the wind shifts today, but it was quite crazy at times. I am really tired after that long day, but we are really happy with our results. We are aware that it could have easily been a lot, lot worse, you could easily have made two sixth places. We are really happy. It was quite good that we understood what the average breeze was and were able to see what was happening on the water. Staying in phase really just means trying to sail the shortest distance on the water and we seemed to be able to do that.

In this light wind it is easy to have a bad result, so we are happy that the lightest day should be behind us. When there is more wind if you are sailing nightly you can have bad results but the sailing is more logical. Now we have a nice risotto tonight, some nice beer tonight and forget as soon as we can the results today because that feeling does not give you the opportunity to think what you can do better.
Vasco Vascotto (ITA), tactician Azzurra (ITA)