(Wednesday 19th June, Puerto Sherry) –   It was places gained on successive runs during the second race today that keep Azzurra and Bronenosec in the top two places after four races at the Puerto Sherry 52 SUPER SERIES Royal Cup.  At this new, challenging venue for the circuit, the key learning so far is that consistency is especially elusive in this high-level fleet on a race course where the sea breeze on the water is especially hard to read.

Witness the fall from grace today of the leaders after Day 1, Provezza. A win and a fourth yesterday saw them sitting pretty at the top of the scoreboard this morning. But two seventh places today sees Ergin Imre’s crew drop to sixth, six points off Azzurra’s table-topping tally of 13 points.

Top scoring boat of the day was Harm Müller-Spreer’s Platoon, which rises to third overall after winning the second race. But over the two races, the Roemmers family’s Azzurra and Vladimir Liubomirov’s Bronenosec both returned useful seven-point aggregates.

After finishing second to Quantum Racing in the first race of the day, Azzurra got themselves back in the match when they recovered from seventh to fourth on the first run. And on the second downwind Bronenosec, with Morgan Larson on tactics, climbed from sixth to third to claim second place overall on the standings.

Azzurra lead the regatta – the second of the season – by one point, skipper-helm Guillermo Parada said:

“It was a spectacular day in this great fleet with very close racing. By such small differences you can be first or you can be last. The second race was more difficult after we had to recover from a not-so-good start, but in the end we fought well for that fifth place. But most of all I am really happy with the attitude on board, we have the right mindset to fight for each and every metre ,which you have to do to do well.”

The subtle shifts in wind strength and pressure are made all the more difficult to read because of the lack of contrast in the colours on the water. The tidal currents and an inflowing river means the waters – rather than the easy on the eye azure of the Med – are rather darker.

“What a tricky place this is. The wind is coming from everywhere. Every single minute it seems like it changes, the wind is moving ten or 20 degrees, but it is also about the changes in wind pressure and the current. But then it is the same for everyone. Tomorrow is another today.”

Second after four races is the best position yet for the new Bronenosec, skipper Alberto Barovier commented:

“We are finding a good balance in the team. We are communicating well between myself, Sime, Morgan and navigator Ed [Smyth]. We are having fun, it is a nice set up to have, and it is good on the boat and off. We are enjoying it and the group is very tight. It is a smaller fleet compared to Mahón, and here you never know what is going to happen next.”

“It is great sailing here. It is tricky and so much is all about how you position at the start and set up of the first part of the beat. We had a good one today after a couple of bad ones yesterday. We have to start correcting some of the fundamental mistakes we have been making and start stringing together more performances like our first race today.” 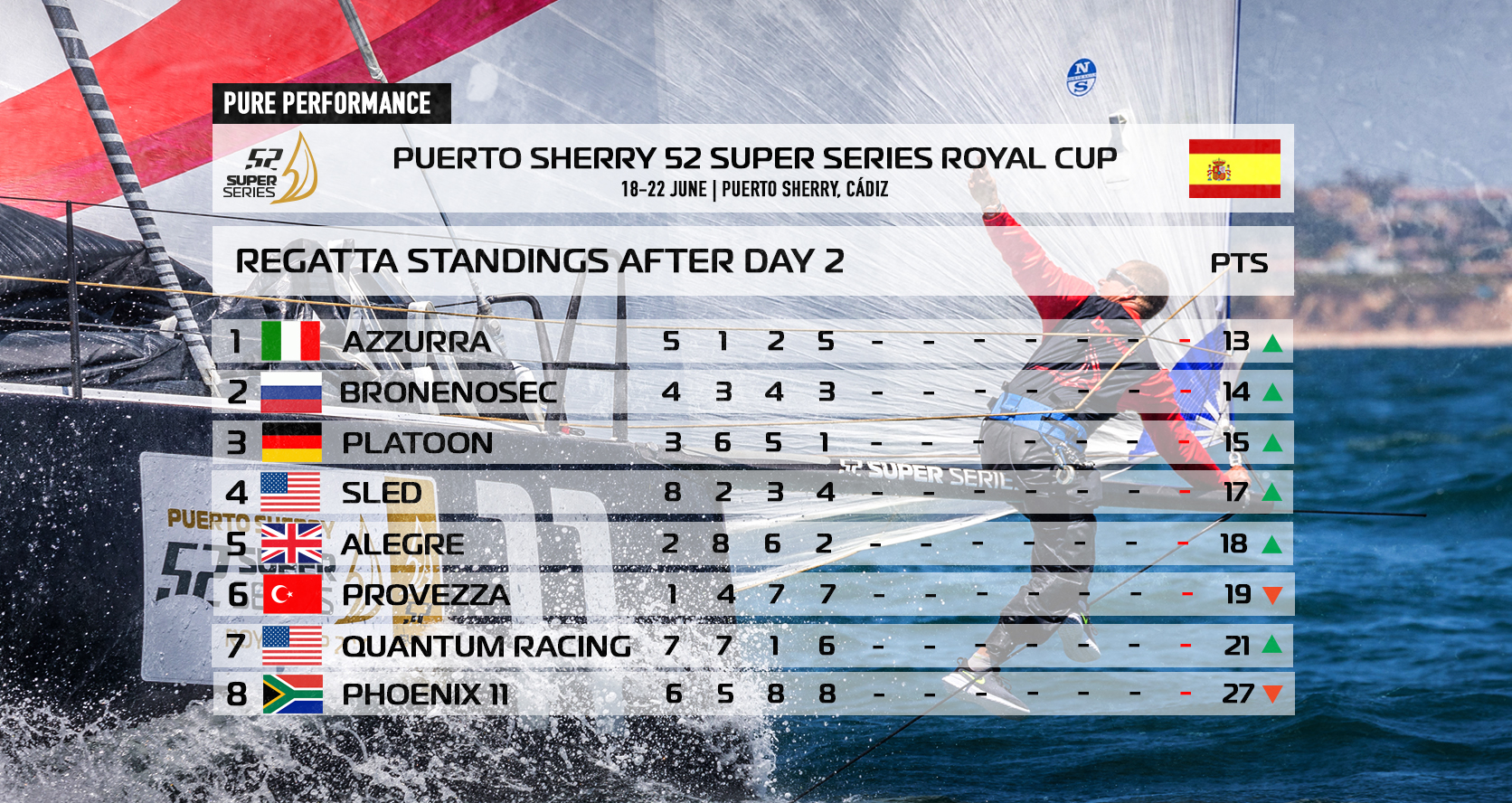