(Tuesday 25th July, Puerto Portals) – Two second places on the Bay of Palma today for Niklas Zennström’s Rán Racing allows the team – that won the last regatta in Sardinia – to extend five points clear at the top of the leaderboard for the Puerto Portals 52 SUPER SERIES Sailing Week.

In a moderate SSE’ly breeze that built to 16kts during the afternoon there were two different race winners, but Zennström’s team retained a solid consistency. Provezza won the first race starting smartly off the left, pin end of the start line and using the left. Azzurra atoned for a costly penalty turn at the first mark by following up with a victory in the second contest, taking them up to second overall. 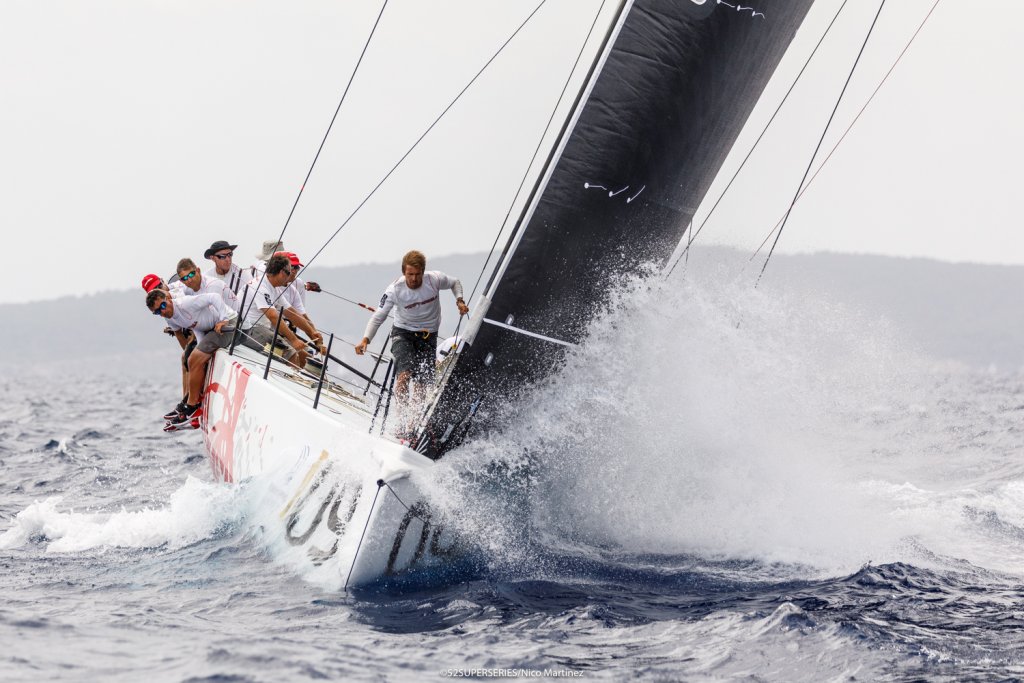 An easy win for Ergin’s Provezza in the first race of the day.

“The boat is going well. We worked hard on the changes through the winter and that for sure made a difference. We have good settings and I feel like we are all sailing quite well. Adam Beashel works hard on the weather strategy, but everyone really is working hard and contributing.”

In both windward-leewards today, the early race leaders were able to break away and build their margin. In second position through both races, Rán Racing were variously in attack and defence modes throughout the day, but tactician Ado Stead and strategist Beashel modulated their game, looking comfortable in Race 2, although Rán were sucked backwards to defend against the pack’s advances in Race 3.

It was not all super smooth for the regatta leaders. A close cross with Alegre in the second race saw them clipped on their aft quarter breaking their stanchion and Alegre penalised.

“It was a bit of a shame because it compromised us for a lot of the race, particularly for the guys hiking out on starboard tack. We thought we’d fixed it, on the downwind, but started up the second beat, and when we all hiked out it broke again and we managed to just grab the two guys who were actually in the water, we just managed to hold onto them and pull them back in. We were so lucky, and very pleased to hold onto second.” 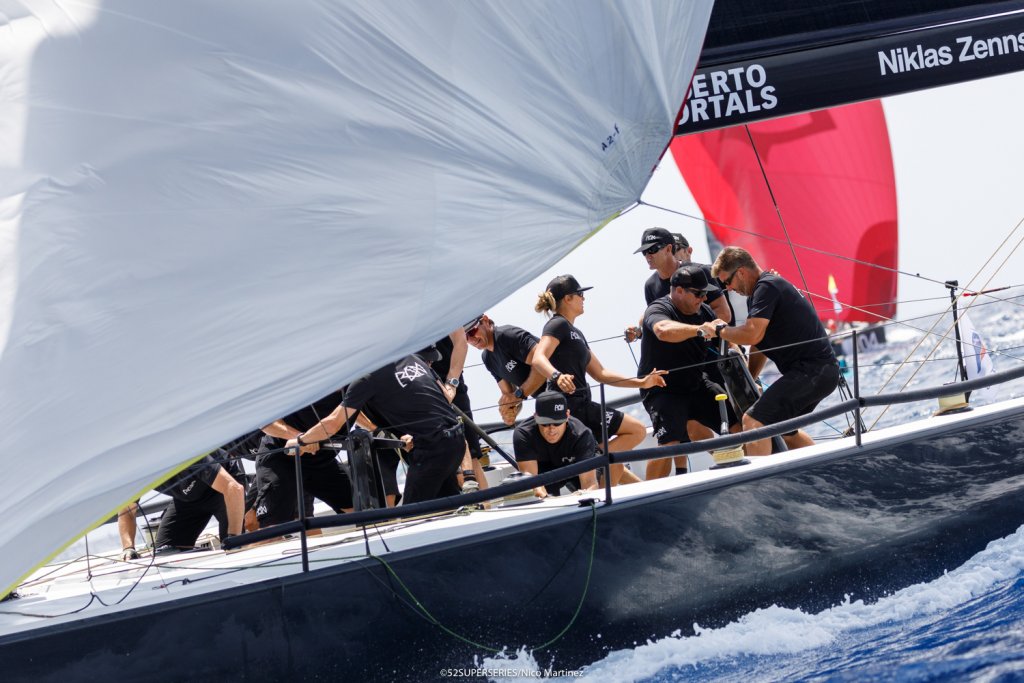 The day’s winners, Rán Racing were clipped by Alegre in Race 3.

“Racing in this fleet is all about just getting all of the little details just right. I’d say so far in some of the regattas this year we’ve missed out on some of the little detail, but here we’ve worked pretty hard on our starts, we’re going really well with our speed, we have a new mainsail that’s going really well, our jib setup is really nice, so lots of little things have made the difference to allow us to execute the start and hold a lane. Adam Beashel, Steve Hayles and myself, we like Palma, we’re quite confident here. I think in this fleet you have got to sail confidently, and we feel we’re quietly confident here.”

Provezza won off the start line in the first race. Tactician Tony Rey was confident enough in the strength of the left to put the pedal down and sail fast towards the left and they were rewarded by a comfortable margin at their top mark rounding. At the one point they were over 200 metres ahead of Rán. But while they were way ahead, in the heat of the compact, tight mark roundings, circuit leaders Azzurra dropped off the back of the train after taking a penalty for tacking too close to Platoon. They pulled back to sixth, a result that Vasco Vascotto, the Azzurra tactician, was happy with considering how hard it was to make places.

And while Azzurra went 6,1 for the day, neither could Provezza complement their win with a second podium result, seventh in the second contest today, tactician Rey commenting:

We just loved the racing today it was great. It was a shame we got the results the wrong way around, if we would have got the first in the second race then the smiles would be bigger.

In the first race we made it look easy because we were so far ahead but the reality is that the rich just got richer. And everyone on these boats has sailed here a lot so we all kind of knew that was how it was going to play out. Peter Holmberg did a beautiful job of winning the pin, and we talked a lot about that in regatta preparation: of how to win the pin when you have to do it. And he executed great.” 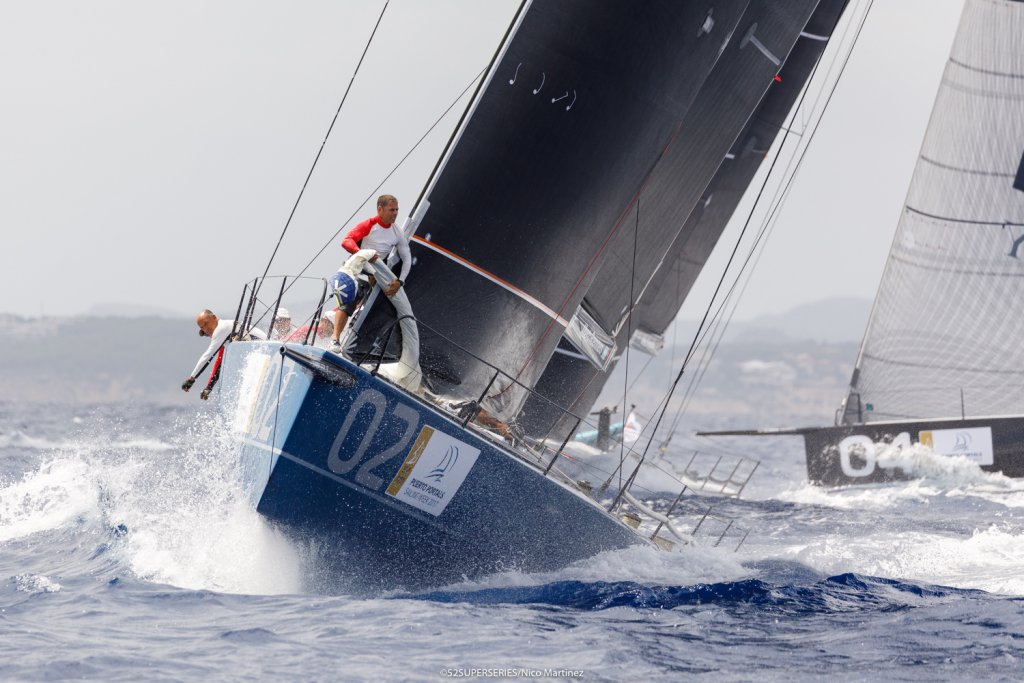 Azzurra took a bullet from Race 3 putting them into second place.

“It is always about the overall, we have said that from the start of the season. And from that point of view, today was a good day, putting points on Quantum Racing and Platoon. And so as well in the first race I was happier with the way that we fought back from the back to take three points on Platoon.” 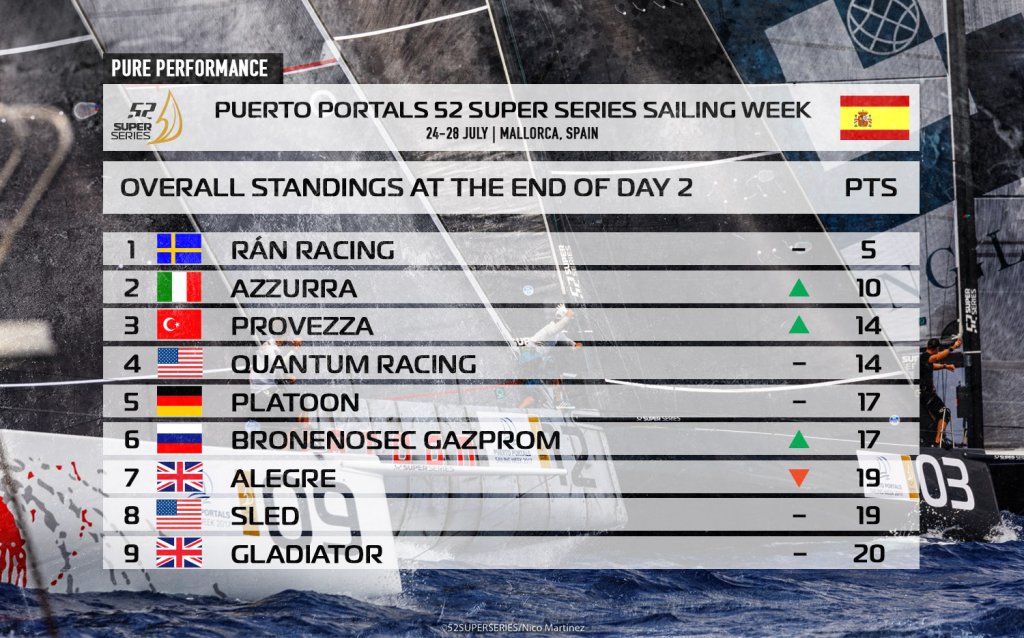 The Puerto Portals 52 SUPER SERIES Sailing Week will take place from 24-28 July. Track the boats via state-of-the-art Virtual Eye at www.52SUPERSERIES.com/LIVE or via the app.