A Mouth-Watering 2018 52 SUPER SERIES Is in Prospect

(Wednesday 29th November, 2017) – The 2018 52 SUPER SERIES looks set to feature an unprecedented nine new-build boats; at least three America’s Cup teams, who will each be new to the world’s leading grand prix monohull circuit; and two international crews, who have raced in the circuit before, will be returning to the fray.

This winter will see a frenetic level of boatbuilding activity at premium facilities around the world. While some of the teams that made early new-build decisions plan a short training spell prior to the warm up Palma Vela regatta (3-6 May 2018), others who have left it later may have a race against time to be ready for the first of the five 2018 52 SUPER SERIES regattas in Sibenik, Croatia, May 22-27.

Luna Rossa’s Bruni, who has previously sailed on several TP52s including Azzurra, Matador, and this year guesting latterly on Bronenosec, explained:

“The TP52 is a great class. It’s hard and close racing. There are many teams that have more TP52 experience than us who will be very hard to beat, so we will not be favourites. Everyone wants to do well and we want to demonstrate how strong Italian sailing is at its best. This will be the best year ever for the TP52s, I am sure. Our final goal is the America’s Cup.

Patrizio Bertelli is very keen that this is an all Italian-speaking team and we want to bring on young Italian sailing talent. We will do some initial crew trials with young Olympic sailors and some young guys with big boat experience. Initially we will be drawing on Italian sailors with a lot of TP52 experience, but the aim is to have young guys observed as potential for the Cup team.”

Luna Rossa will train initially from their base in Cagliari, Sardinia, chartering the XIO Hurakan TP52 as a training platform prior to launching their Botín-designed new boat, which will be built at Persico in Italy.

Other teams building a new boat that will compete on the 52 SUPER SERIES include Hasso Plattner’s Phoenix crew. Plattner bought the 2015 Phoenix and had such fun racing it that he has decided to join the circuit with a new Phoenix, currently in build at Persico, which he will campaign alongside his daughter Kristina. Project manager Tim Norris reports that they have been putting their crew together for 2018, and that they have just completed a two week training session in Cape Town, South Africa.

“We will have Hasso driving​ at some events, and his daughter Kristina will helm some events also. It’s a bit of a family affair and we are trying to get some South African sailors a chance to sail at this level too. We plan to have the boat build finished in April, then sea trials before Palma Vela.

We are really looking to have fun with a good bunch of people. We are looking to learn a lot for the seasons to come and hopefully not come stone last by half a mile in every race!” 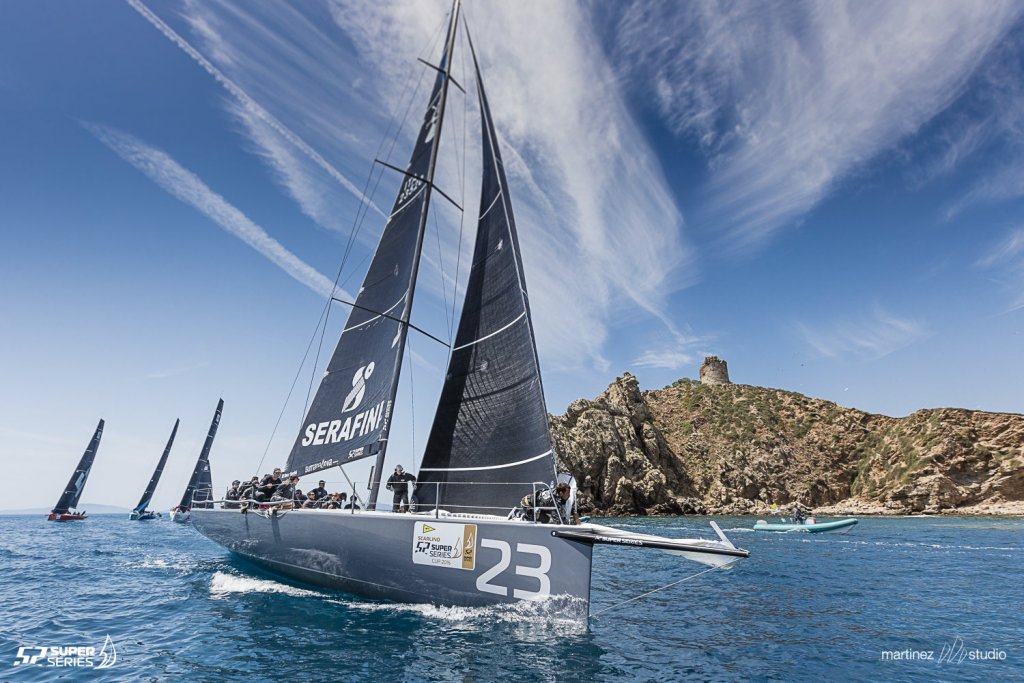 Two popular teams are returning to the 52 SUPER SERIES after taking breaks from racing. Marco Serafini’s Italian team XIO Hurakan intend to compete in 2018. And Brazil’s double Olympian Eduardo de Souza Ramos has a new boat in build, and plans an all-Brazilian crew that will have five-time Olympic medallist Robert Scheidt as tactician.

De Souza Ramos last raced with the 52 SUPER SERIES in 2014, finishing fourth overall. Their project is run by Volvo Ocean Race ace and 2008 49er Oympian, Andre “Bochecha” Fonseca. Their helm and crew are already training in a variety of smaller grand prix yachts in Brazil.

“We plan to be ready on 15th April and sail Palma Vela” outlines Fonseca. “We will have a very Brazilian team. That is what the owner wants and we are looking forward to it. And Robert is looking forward to being back on the 52s.” 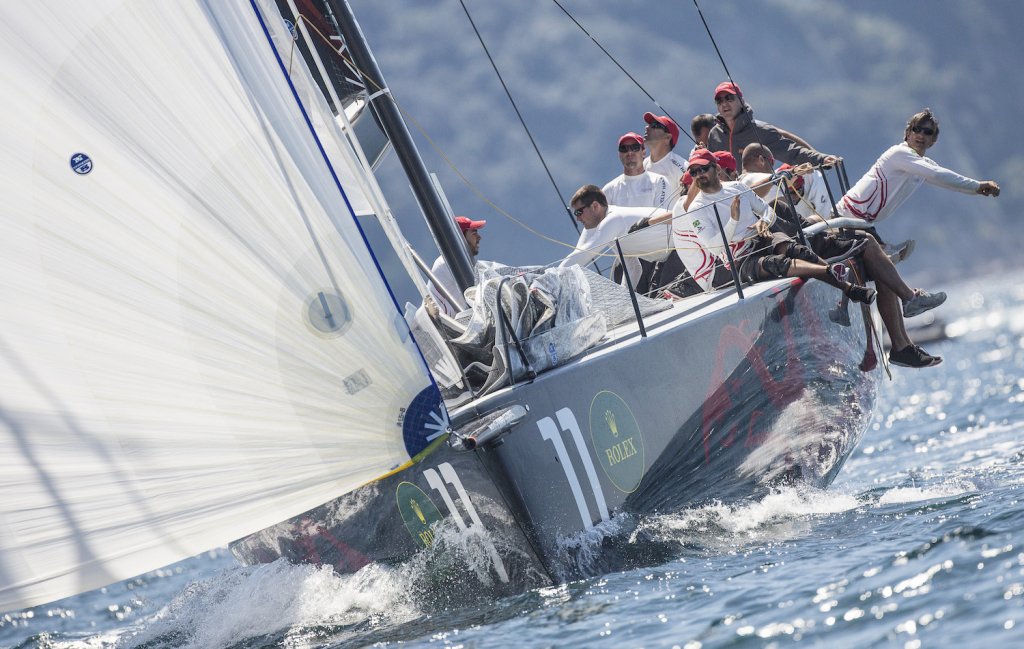 De Souza Ramos’s new Onda is being built at King Marine from the same moulds as Azzurra, but they expect to launch about two weeks after the reigning 52 SUPER SERIES champions.

“Eduardo loved the venues, and the racing. He likes short windward-leewards and the very high level of competition of the 52 SUPER SERIES. He has missed it and can’t wait to be back.

I think our goal is to be looking to two years ahead, really. To be learning as much as we can this year to get back into it.”

The Brazilian team will work with Quantum Sails. Fonseca continues:

“Ed Reynolds at Quantum Sails has been helping us a lot with the decisions and technical parts and we are very happy with what we have and what they have given to us.”

Committed 52 SUPER SERIES owners like Germany’s Harm Müller-Spreer – runner up in 2017 by only seven points – are relishing the arrival of the America’s Cup teams, and other new teams in 2018.

“We are really looking forward to next season and to going up against the new teams. But I think the top teams will still prove to be the same, Quantum Racing, Azzurra, ourselves. It will take the new teams time to learn the class and the small details that make the winning difference. That, I don’t think, is going to happen overnight for them.” 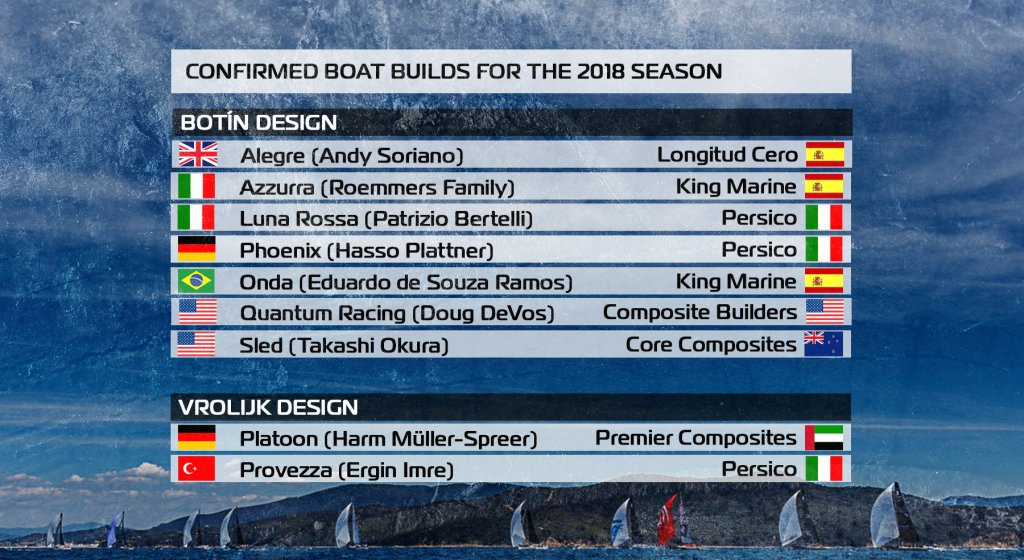 Seven of the new-build TP52s are from the Botín Partners design office, and two from Vrolijk. Botín’s Adolfo Carrau reveals:

“This is such an exciting time for us. We have never been this busy in 20 years. And this will undoubtedly be the best year ever for the 52 SUPER SERIES. Having seven boats to design is confirmation that we have been doing things right. We will see a lot of innovation, especially in the hulls, the systems and the rigs. So many of the suppliers have moved their game on so much, we are having to re-engineer stuff. We expect the new boats to be noticeably faster.”