A Finale Fit for a King!

After a dramatic Friday which saw Quantum Racing as boat of the day posting a second and first, with owner-driver Doug DeVos on the helm, getting their Copa del Rey MAPFRE title defence back on track, Harm Müller-Spreer’s German Platoon falter after a costly penalty in the second race contributed to a weighty eighth place, and world champions Azzurra sail to a consistent but modest six, five, the destination of the 52 SUPER SERIES regatta championship at the 34th Copa del Rey MAPFRE is wide open.

Azzurra lead into Saturday showdown by a single point ahead of Platoon and Quantum Racing tied up on the same aggregate, with Russia’s Bronenosec in fourth only one point behind. The Bay of Palma has seen many close fights decide the TP52 title over the 10 years that the class has been competing at the Mediterranean’s pinnacle summer regatta. But for sure the battle of Palma this time will be truly captivating, too close to call. And each of the teams possess such different and exciting talents both individually and as crew units that the way they each respond to the final day pressure will be fundamental to the outcome.

Azzurra, world champions came into the regatta and seized the early lead but have misfired slightly in recent days, not being able to achieve the same domination that they have run with through back to back wins in Sardinia and at the World Championship with.

Today’s 2,1 and deficit of just one point off the lead prove Quantum Racing are in the winning groove again – even if that is only therir second victor’s gun this season.

After their two wins Thursday, Platoon slipped today. They lost third to Bronenosec in the first race. But after leading around the top mark in the second race, they slid into the middle of the fleet before the contentious penalty which came in a port-starboard crossing with Sled. Their resulting turns cost them a place but they were unsettled and lost another plce down the final run. The runners up at the world championship need to come out with fresh, clear heads and do what they had been doing so well until today.

Race six was delayed while the light sea breeze built. It proved to be lighter than expected at just six to nine knots. The race course was much more open and contest was defined much more about seeking out the best wind pressure rather than simply drag racing to the left side of the track upwind. Provezza prevailed from a pin end start, holding off Quantum Racing to win. Second for Quantum Racing was well won, reading the subtle changes and bands of breeze very well, especially on the first upwind. Azzurra struggled in the traffic coming back to sixth. But with them two places behind Platoon that gave the German flagged crew a tw points lead going into the second race, Quantum Racing and Bronenosec tied on points.

The Embat sea breeze came in, better late than not at all, building to 13-14kts to produce an extremely close Race 7, especially as has often been the case, in the middle order where the one sided track makes for especially tight, high octane racing. Platoon lead at the top turn by virtue of an inside overlap on Quantum Racing, but the left yielded a key gain for Doug DeVos team and they lead, almost bow to bow with Alegre through the gate. Platoon were rolled by Alegre on that run.
Quantum Racing were able to keep the fleet under wraps going on to win. Bronenosec took second to keep themselves as title contenders, running 1,4,2,3,2 for the last five races. But Platoon may rue their penalty and the resulting eighth.

And so the title is finely balanced, success will be down to managing risk, whilst all the time keeping an eye on the biggest prize, the Copa del Rey. Azzurra’s skipper Guillermo Parada concludes:

I think we need to take a little bit more risk. I think the boats which are winning are taking a bit more risk. If you have a plan you need t go for it 100 per cent. If you try to cover too many options you come unstuck. You need to go for the win. And that is what we are going to do for tomorrow.
Guillermo Parada, skipper, Azzurra 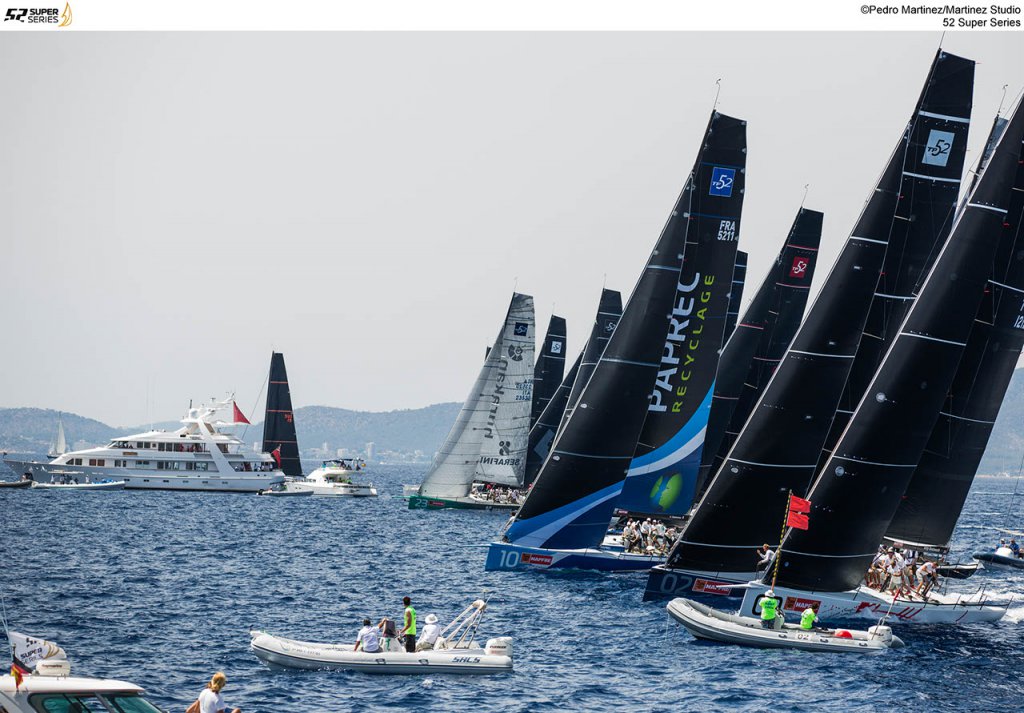 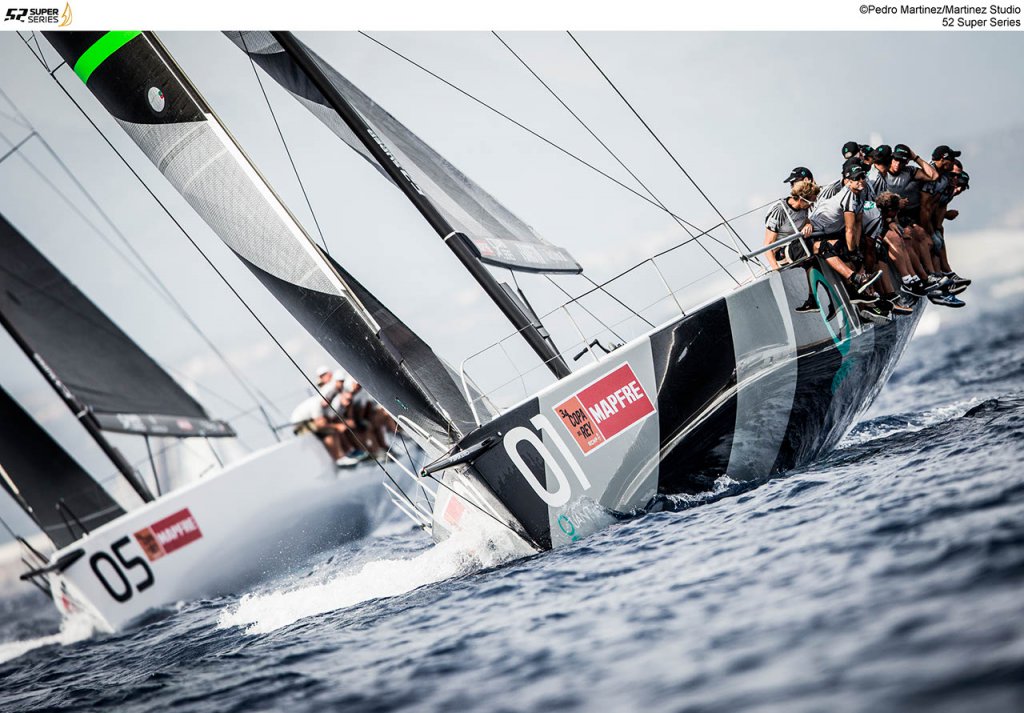 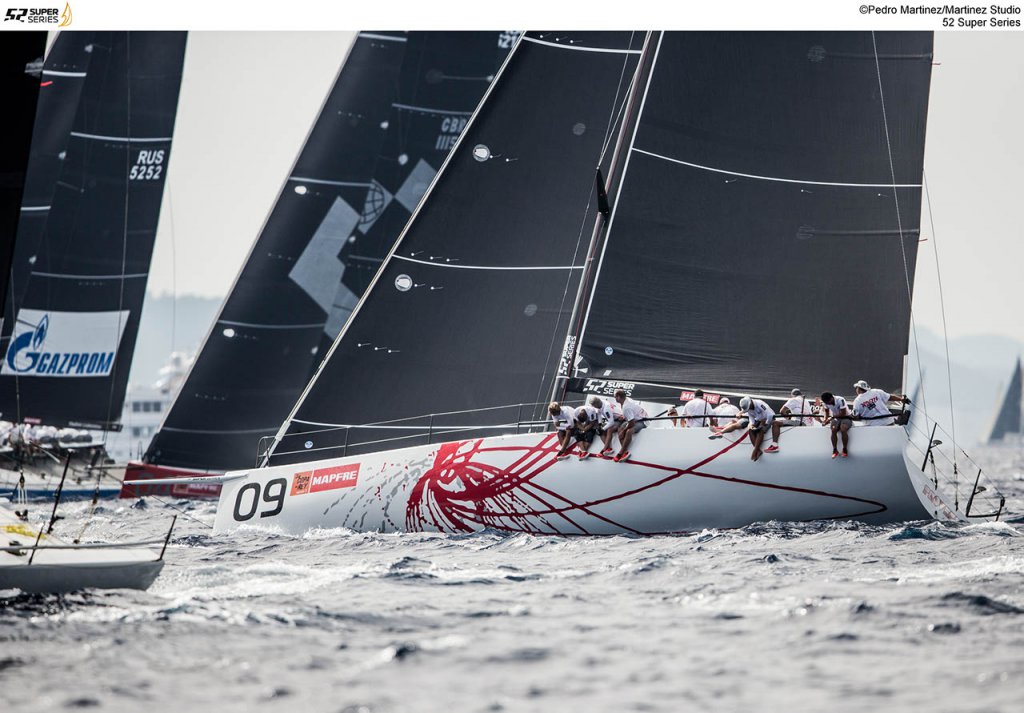 Guillermo Parada, ARG, skipper-helm Azzurra (ITA): “It is good to be leading by one point into the last day ahead of a bunch of boats which are very, very packed together. I am looking forwads to an exciting final day and I am hoping we can make it happen again. Today we did not have a very easy day. We had good starts but complicated our position more than we maybe needed to. We paid for that but we were able to hang on strong and recover, especially in the second race. We recovered five or six places to be able to recover our lead. I think that if you asked us at the beginning of the week if we would like to be in this position, I am sure everyone would like to be in this position. So we cannot complain.  I think we need to take a little bit more risk. I think the boats which are winning are taking a bit more risk. If you have a plan you need t go for it 100 per cent. If you try to cover too many options you come unstuck. You need to go for the win. And that is what we are going to do for tomorrow.”

Ado Stead, GBR, tactician Quantum Racing (USA): “We had a better day, boat of the day in fact. We knew the first race would be more open and it was. The breeze was a little lighter to start with than what I think people though there would be. The first race was about finding the best pressure and then defending the left, conscious that the left was better. It was good. We took our opportunities and were patient in both races. Yesterday we had a couple of distractions and looked to try and recover too much in the first race. Today we are right back in it.
Both Doug and Dalton are brilliant sailors in their own right but for Doug to come in and find your feet in a very tough ask. Yesterday was a day when you had to be metre perfect off the start line because it was such a left hand track. Today there were a few more options and we were able to find lanes. We are looking forward to tomorrow, in with a shout at winning Copa del Rey. And that is always good.”