The regatta has attracted 16 boats from 12 different nationalities and will celebrate 20 years of the TP52 class with seven invited boats of different generations racing on the Bay of Palma alongside the nine 52 SUPER SERIES contenders.

Most of the fleet have been moored in Puerto Portals for some days now and training regularly on the bay in anticipation of Tuesday’s start of racing. The fleet will have official training races Sunday and Monday.

At the online press conference were Corinna Graf, CEO of Puerto Portals; Agustín Zulueta, CEO of the 52 SUPER SERIES, Nacho Postigo, Provezza’s navigator who was instrumental in bringing the TP52 to the Mediterranean and Toni Guiu owner and helm of the first Spanish boat to participate in a 52 SUPER SERIES event, Blue Carbon. 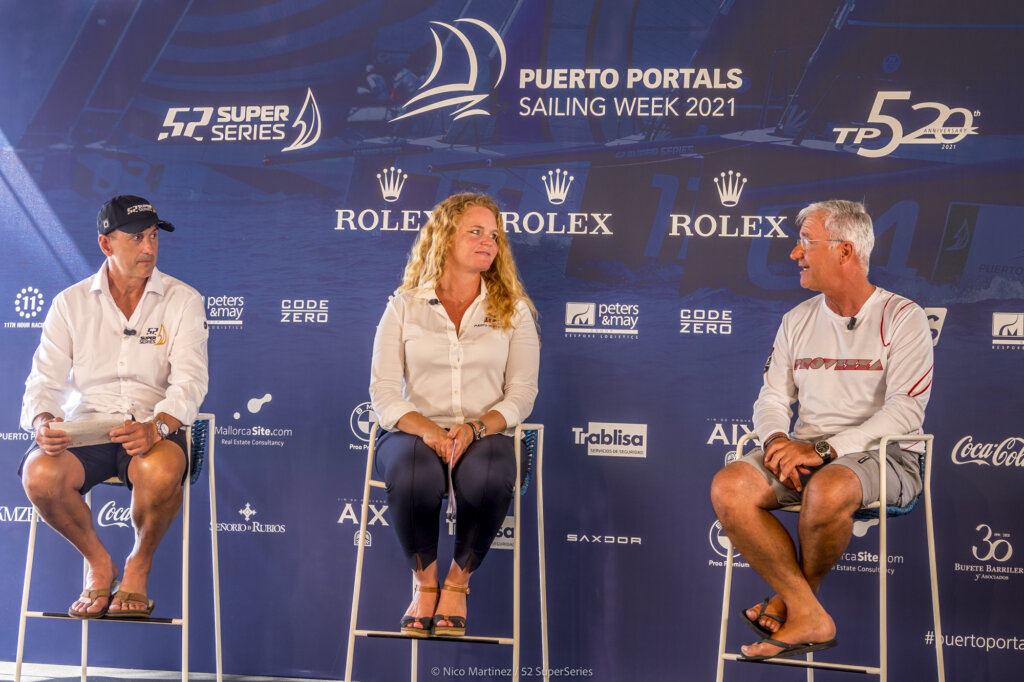 Corinna Graf commented: “We are very excited to host the 52 SUPER SERIES international circuit one again after such a difficult year for everyone. It is a shame that it did not allow us to celebrate last year’s edition. But we are back with a special, very safe event. We have adapted to the health protocol and, in addition, we have reinforced it. We are off to a new start, more enthusiastic than ever, and also of course delighted to be celebrating the 20th anniversary of the TP52 class. The first time that the TP52s arrived in Europe was in 2005, and that same season the boats were already competing on the waters of Puerto Portals. That is why this anniversary is very symbolic for us, since we feel part of their history, just as they are part of ours ”.

CEO of the 52 SUPER SERIES Agustín Zulueta said “We are delighted to be back to racing here in Puerto Portals. If there is one venue which does everything but guarantee that everything will be fine, it is this place. We have been coming here now for six years in a row. Our owners know that Puerto Portals is always a guarantee of a good regattas and an excellent set up ashore. That is the perfect combination. I think we are back in a big way with an incredible level of teams. 16 boats of twelve nationalities is an impressive number of TP52 and I want to thank and welcome the seven owners who have come to be with us in celebrating the 20th anniversary of the class. In return for the support and enthusiasm of the venues we are pleased to contribute to the economic reactivation after the pandemic. In Portals we will total around 500 people that are involved in the regatta. And our estimate of the economic impact is in the region of three million euros ”.

Toni Guiu, owner of Blue Carbón, explained: “We are very happy to be able to share this incredible experience of sailing with these boats and to be with friends from 20 years ago such as Agustín and Nacho. For me representing Spain as the only boat is very gratifying. The best boat to sail is the TP52, I can’t imagine doing it on any other boat. It represents history, technology and power. I enjoy our 2005 boat. Our message is sustainability and we are pleased to be uniting with the 52 SUPER SERIES which has been doing a great job for a long time to promote sustainability. We have done many of the things that 52 SUPER SERIES has done for a long time in this regard and we have managed to be the first carbon neutral boat in the Mediterranean ”.

Nacho Postigo, Provezza, “For the TP52 class Puerto Portals has a very special meaning because the adoption of these boats was cemented at a very important meeting here in 2004 where all the owners shook hands and said ‘Yes’. So seeing the boats together and celebrating this anniversary here makes a lot of sense. For people it will be very revealing to see boats from 2005 like Toni and the current ones from 2018 sail alongside each other.