Who will take first blood in Valencia?

What will the biggest and most competitive 52 SUPER SERIES fleet of TP52s be like?
How close will racing actually be?
How much difference will there be between the nine new boats?
What’s to choose between the five new Botin Partners designs and the four new Vrolijk designs?

When competition for the 2015 52 SUPER SERIES, the world’s leading grand prix monohull race circuit, starts Tuesday 19th at Ford Vignale Valencia Sailing Week some answers to these burning questions will become evident. Meantime, the level of excitement and interest around the dock in Valencia has not been seen for many, many years at an inshore grand prix regatta. Valencia is buzzing again.

Nine brand new boats and three proven, established designs represent a quite significant investment of time, money and energy for their proud, poised, expectant team owners.
And it is a glowing reflection of the desire of owner-drivers to go TP52 racing.

For all that, it is hard to predict who might win the top prize for this this five regatta 2015 circuit come September. There are many more variables than in preceding seasons. The fleet is bigger and so many new boats which are relatively unproven and unknown. It is ‘all change’ in the afterguard of the back-to-back championship winning Quantum Racing. Leading contenders Rán are only due to race two regattas this season. When there are well drilled, excellent teams which previously had an older boat, now they are rmed with a new competitive boat they race on level terms.

Any register of form really does default back to zero. 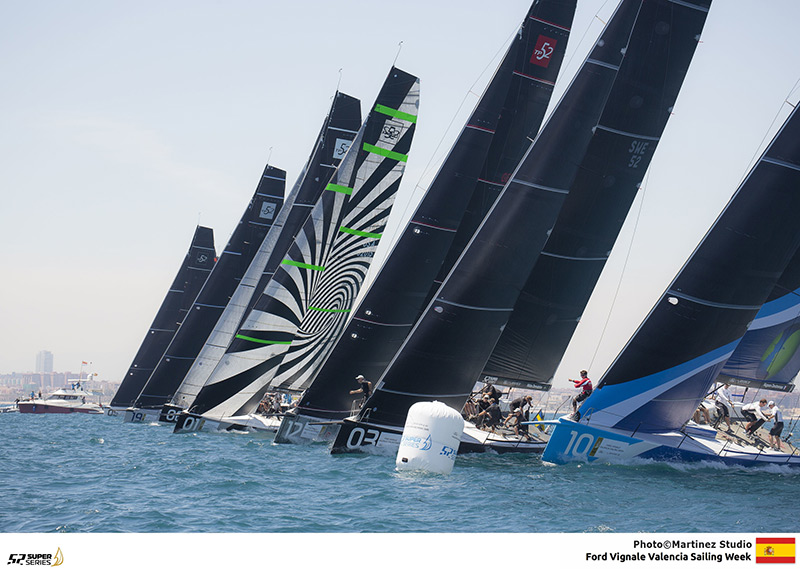 First blood?
Additional insight is gained from today’s one, adrenalin fuelled practice race. Most of all It proved there will be nothing in it. At the first top mark the fleet was overlapped, mere seconds between first and 12th. He who won the start and a lane of clear breeze did best. Getting caught a metre short on the start line at the gun and life proved much more difficult.

For the record it was Niklas Zennstrom’s Swedish flagged brand new Vrolijk designed Rán which won the practice race, finishing just ahead of Jean-Luc Petituguenin’s French, mainly amateur crewed Paprec, the 2011 build ex-Rán Racing. All the way through the fleet the places changed all the time.

Setting the blood racing…
One of the reasons for the outstanding success and longevity of the class is the managed evolution of the design rule ‘box’ which has ensured the boats get quicker and more challenging with each iteration. A new generation rule comes into force this year and that has promoted the building of new faster, more exciting boats.
It is a different animal now but with the same genes as 2005 when the TP52 was introduced to Europe. The displacement has dropped in managed stages by 500 kilos from 7500kgs to 7000kgs, lowered 200kgs from last year. Draft has gone up in steps from 3.2m to 3.5m. Mainsail area has increased from the original 91.51sq m to 98.5 sq m now with powerful square roached mains. Spinnaker area has risen progressively from 247.6 sq m to 270 sq m. Max crew weight is down from 1273kgs originally to 1130 kgs, now sailing with one or two crew less. Deflectors on backstays which add power and control to the rig are new this year. From a traditional spinnaker pole length of 7.67m to a bowsprit at 9 metres (both measured from the front of the mast)

Live coverage of the racing in real time is broadcast daily on www.52superseries.com

crew lists are on www.52superseries.com 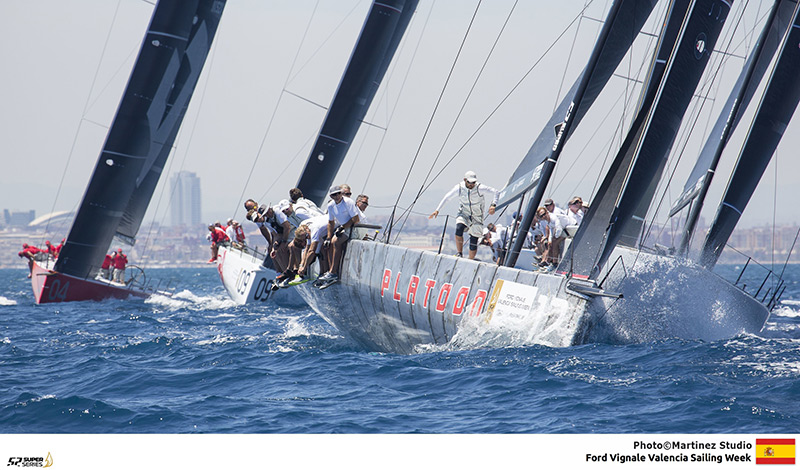 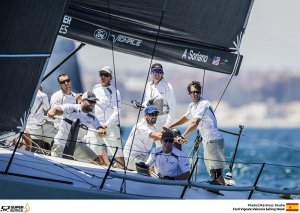 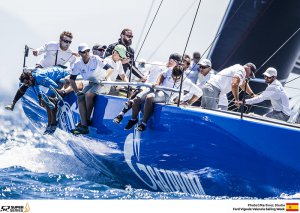 We are in good shape now and seem to acheive a lot in the last couple of days here and I think we are now well ahead of where we were in Palma (Palma Vela warm up regatta earlier in May). We have a good set up now with Ed Baird doing the starts as starting tactician and starting coach with Dalton and that allows me to have a good look around on the race course. Then I do tactics around the course. Off the start line it is handed over and Ed is strategist. Dalton is used to high level sport and is used to being pushed hard and so it is working out well.
Adrian Stead (GBR) tactician Quantum Racing (USA)

Last season we were the boat which won most of the practice races and so we seem to continue with that tradition! It was good. It is great with the bigger fleet. We got a good start and got a good lane and then we could sail our own race. I think the boats are very even. Every one is just trying to find the right modes. We are all learning the new boats. It is great with the new boats but of course there is a big risk with a new boat. You know what you had with the old boat, what you are doing, now you don’t really know until you line up. But we seemed to be fine. And it is good to see the old Rán just behind us. It is great to see the new boats and the new owners coming into the class. I think all the teams have a good level and there will be an even level. I dont think here will be some good boats and some not so good. All the new ones are still learning too but they are good teams.
Niklas Zennstrom (SWE) owner driver Rán Racing (SWE)

We have very low expectations. We have had the boat in the water for just over one week and so we set our bar very realistic. And so we have a nice surprise to have such a good package, boat, sails and rig and we have just checked in and are happy with it. The important thing is going to be how we sail. All the fleet is very tight. The boats are really, really close. And so it is coming down to start, strategy and practice. There will be lots of ups and downs. The goal is consistency.
Michele Ivaldi (ITA) tactician Bronenosec (RUS)

We had a constructive week. The boat was two weeks late off the ship (delivery from NZ). So some of the jobs we had hoped to do have had to wait. But we have had some good training here and are in the mix. I think everyone is in the mix, though! I think it is going to be a very exciting season with so many new boats. I think if you threw it down on the table right now then you would not know how it is going to shake down. It is as close as one design. Our team is the exact same as in Ibiza and the plan is to keep it together as much as possible. Our aim is to keep our noses clean and to keep improving. As easy it is to say that will be hard to do. And we are not lacking for anything to get on to the podium. I would not say we are the highest budget team but we are not lacking for anything. We will have no excuses.
Ross MacDonald (CAN) tactician Sled (USA)

Sailing against other boats here for sure is the best way of learning. And it is a steep curve. The new boats are significantly faster upwind for sure. The boats are ripping around quite a bit faster than before, especially upwind. You notice the extra power. They wick up noticably in not very much wind. They are turboed up significantly on last year. Now it is undertsanding how you go against other boats with different sails.
Tim Powell (GBR) mainsheet and project manager Rán Racing