Azzurra masters of the strong breeze in Miami

After some of the breeziest, most challenging conditions of recent TP 52 regattas in either Europe or the USA, Azzurra’s scoreline for the day of two second places and a win takes the Italian flagged team back into the overall lead of the 52 US Championship off Miami Beach, but their margin is still tight, only one single point ahead of Quantum Racing. 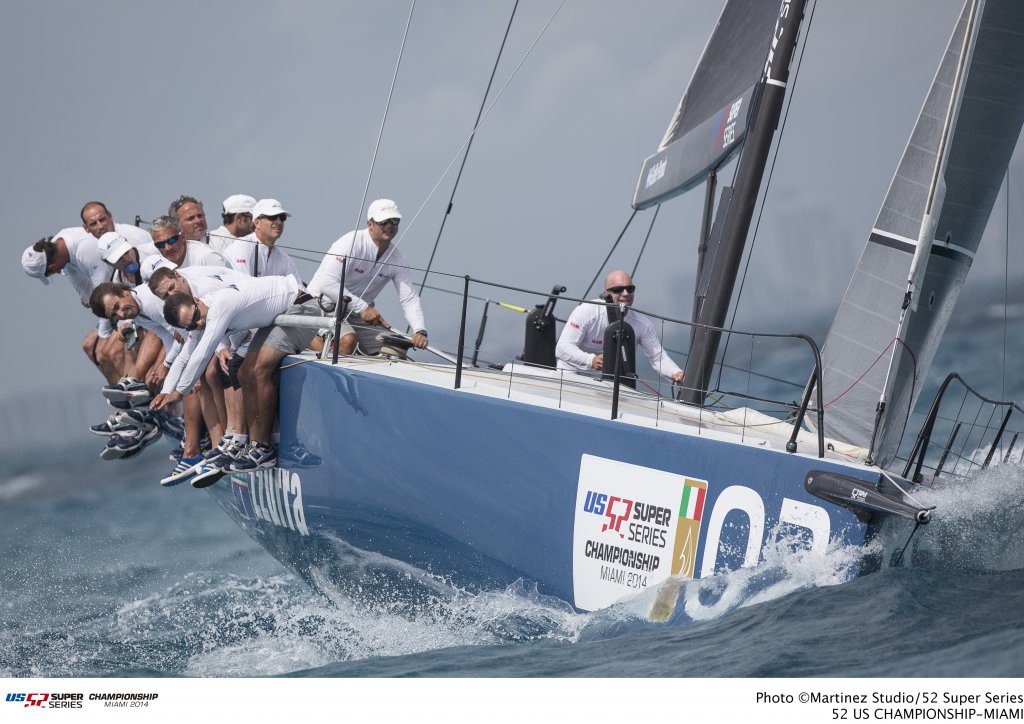 It was only when they emerged victorious from a last race photo-finish with Takashi Okura’s Sled judged winners of the last, high speed race of the day that Azzurra stepped clear of the 52 SUPER SERIES champions the Ed Baird steered and skippered Quantum Racing who tallied out with two wins and a fourth today.

The cross offshore W’ly breeze topped 31kts in one prolonged squall, was often up to 25kts and probably averaged 19 or 20kts over the three races. With a nasty chop and wind swell which built down the course, and very shifty, changeable pressure and angles at the top – closest to the shore – it was not just the wind velocity which placed a huge premium on slick, solid boat handling, but there were big gains and losses to be made especially downwind. And there were several big wipeouts. When a stanchion failed on Hooligan in three crew were catapulted into the water, one sustaining a suspected fractured arm. 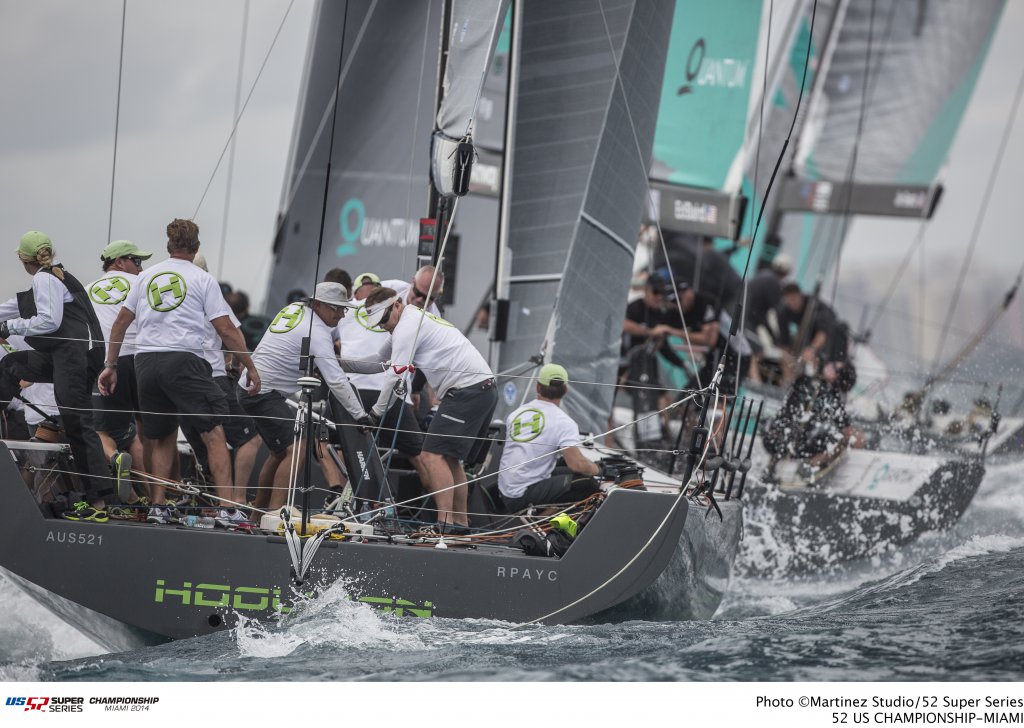 Quantum Racing won the first two races but their winning guns were hard earned. The first contest featured a thrilling head-to-head between the two leading protagonists all the way up the breezy first beat, head to head only ten metres apart, neither team crew blinking.

Azzurra just had the slightest edge as they closed at the top turn, Quantum Racing tried to get inside them at the buoy and were penalised. They took their turn immediately and were quickly back on the chase.

The second windward mark was all but a replica of the first, except it was Quantum Racing in the lead. Azzurra, hard on their transom, did not quite get the gennaker tack line on fast enough and while they struggled momentarily to bring the boat under control, the American team were able to race away. Azzurra only just held off Interlodge at the finish line.

A big recovery was the key to Quantum Racing’s second win of the day. They were fifth at the first turn but executed a swift, smooth gybe set which got them straight on to the heels of great gust pattern. By the leeward turn they were – again – bow to bow with Azzurra. The crew from the Yacht Club Costa Smeralda struck out to the left, Quantum stayed right of middle and by the second turn Ed Baird, Terry Hutchinson and the Key West winners were in front. On the thrilling final run Quantum stayed right and extended, whilst Azzurra scraped through for second just ahead of the fast advancing Rán Racing.

For all the world in the third race it looked as if Takashi Okura’s crew on Sled had done enough to earn their first US 52 SUPER SERIES win as they streaked down the final run having lead all the way around the track. But the indefatigable Azzurra team denied them on the line and they had to be content with their second second place of the season.

From a very strong start Ross MacDonald had them into phase with the shifts well, just leading Azzurra at the windward mark. Quantum Racing again found themselves back in the pack.
Azzurra came back at the leaders with a better windshift on the approach to the last turn of the day. That gave them a chance to challenge Sled down the run. Azzurra gybed away earlier, had one better gust, and were only just ahead at the finish gun.

Azzurra go into the penultimate day of racing with a lead of one point over Quantum Racing, Austin and Gwen Fragomen’s Interlodge lies third in the 52 SUPER SERIES regatta 10 points behind.

Miami may have delivered wind well in excess of its usual reputation for light early season winds, but Saturday’s forecast is for a return to ‘normal service’: gentle shifty winds.

US 52 SUPER SERIES – TP52 US CHAMPIONSHIP

We are very happy with the results. Still we made a couple of mistakes and so we have to sort them out in our debriefing, but at the end with two second places today and one first we cannot be unhappy and leading with a point ahead of Quantum Racing. Tomorrow will be very light, very difficult and very shifty and so it is good to finish well in that strong breeze today.
I think that Ceccho (Francesco Bruni) got us some good starts, the boat is fast like that and that makes it easier for me. We did those little mistakes in manoeuvres and we have to sort them out because this sport is about learning every single day.
And in fact the level is so high now you can be very proud after a day like this.
Vasco Vascotto (ITA) tactician Azzurra (ITA)

We come out with a 1,1,4 and if you had said at the first top mark of each of these races that that was how it was going to end up then you would have to have been happy. But we have high expectations of ourselves and so the fourth was a bit of a disappointment. Azzurra came after us in the pre-start – they are going to do that which is fine – we had a good first beat but ended up fifth, 100 metres behind at the top mark and then we were fourth, and then up the second beat we did not take one left shift and that cost us a lot of distance. But there are five races to go, we are down by one point so we are looking at five more tough ones.
The strength of the team is that when we don’t do things well tactically the boat handling helps us out, it is nice to have that in your bag. We had 31kts as the top windspeed and we were trucking along at 24 to 25kts. All things considered you can’t be too disappointed, but I am with that last race. And I will be until 1159hrs tonight and then….it’s gone!
Terry Hutchinson (USA) tactician Quantum Racing (USA)

We have a running backstay system from the old Team New Zealand that is a bit complicated. In releasing the old runner during a gybe, a clutch has to be released in order to the runner tail to run free. In the third race we were gybing away from Azzurra, when this clutch did not open, the main filled, and we did a high-speed broach that was really violent. Three guys got washed out the back overboard. The umpires picked them up, and one was transferred to hospital straight away with injuries to his arm.
Marco Constant (USA) trimmer Hooligan (USA)

This was one of those days you don’t easily forget. You needed good skills all around to survive, and good seamanship not to break anything. Besides a halyard and a retrieval line, we broke not one but two tiller extensions, making it hard for Jim to steer the boat in those conditions. It got really scary when we saw Hooligan wipe out in the last race and I was really afraid we were going to hit the guys who were in the water, since we were on the edge of control ourselves. This was a tough day.
Gavin Brady (NZL) tactician Vesper (USA)

Share this article:
News Overview Mayhem in Miami Worth the Wait
Azzurra US 52 Championship