Will History Repeat Itself on the Bay of Palma At The Rolex TP52 World Championship Puerto Portals 2019?

(Friday 23rd August, Puerto Portals) – History and statistics may weigh in on the side of Quantum Racing, who are the defending 2018 world champions and six-time winners, but skipper-strategist Ed Baird refuses to consider that the US-flagged team start as favourites at the Rolex TP52 World Championship Puerto Portals 2019, which starts Sunday on the Bay of Palma, racing out from Puerto Portals.

“Yes, history may be on our side, but it does not mean much in this competition,” warned Baird at today’s packed international press conference hosted by Puerto Portals on the Balearic island of Mallorca. “The reality is that this fleet is very strong, and when you look at this season you see there have already been three different winners at the three regattas contested so far this season. And at each of them you have had to wait until the last minutes of the last race to find out who the regatta winner is. And I don’t expect this regatta will be any different.”

The defending world champions arrive in Puerto Portals on the back of their first regatta title of the season, narrow victors in Cascais last month in big winds and waves. But while that win marked a level of consistency finally achieved by a team that had seven new or different additions to that which won the 52 SUPER SERIES title in 2018, the Rolex TP52 World Championship Puerto Portals 2019 sees the return for the first time this season of talismanic owner-driver Doug DeVos who will steer Quantum Racing. Baird will sail as strategist with Cameron Appleton in the tactician’s role.

“Doug is such a good, accomplished sailor in his own right that I don’t think we have any worries at all. And the good thing is that at home he has been doing a lot of sailing on one of the older Quantum Racing TP52s. It is a new dynamic with Cameron and we have already had a lot of conversations. It is interesting though because when we have a strategist, even when we had Terry [Hutchinson], we were always better in terms of our course management,” Quantum Racing’s Team Director Ed Reynolds suggests.

History says that the Bay of Palma, and indeed racing from their actual home marina, has been good to the Azzurra team of the Roemmers family, which sails for the Yacht Club Costa Smeralda. The two times that Azzurra have won the world title have been on these waters, winning from the Real Club Náutico de Palma as Matador in 2009, and four years ago in Puerto Portals. The Roemmers family and the DeVos families have raced together at 12 TP52 World Championships. But Azzurra start this world championship as leaders of the 2019 52 SUPER SERIES, eight points ahead of Quantum Racing, but not having won a series regatta this season.

“We are here to break that series and win this event. We love the fact this is a world championship and that is always extra motivation. We have great memories of the last time and hopefully we can make this a third world championship win, and certainly not our last,” smiles Guillermo Parada, skipper-helm of the Azzurra.

All three regattas this season have been won by just one point and have gone down to a matter of seconds here and there. Azzurra have twice missed out on winning overall by that one single point.

“The standard is so high here and everyone knows the Bay of Palma so well, so it is going to be a very close, intense regatta, but we have everything we need to win, we just need to make sure we sail our very best,” tactician Santiago Lange added.

Lange arrived in Palma directly from the Ready Steady Tokyo Olympic test event, as does Sime Fantela, the 470 Olympic champion who sails as helm on Bronenosec.

“I feel good, ready to push as hard as we can for the win,” Fantela enthused. “Probably the jet lag will hit a bit more in a couple of days, but we are going well and won one of the practice races today.”

The Bay of Palma, racing from Puerto Portals, has been the scene of triumphs and disappointments for Platoon and Provezza. Harm Müller-Spreer’s Platoon, 2017 world champions were third here last year while Ergin Imre’s Provezza won the Puerto Portals regatta in 2017. Both have already won regattas this season, Platoon in Menorca and Provezza in Puerto Sherry.

“We struggled a bit in Cascais in the strong winds, but we have good memories here, and of course we have Nacho Postigo as our navigator who knows these waters so well, and so we expect great things,” Provezza’s skipper-helm John Cutler said at today’s press conference.

“This is always a special event for us as Spanish sailors and for Mallorcans, and we do tend to sail well here. We love competing here and Puerto Portals is a venue we love and feel at home at.”

Eleven boats will challenge for the title at this Rolex TP52 World Championship Puerto Portals with racing starting Sunday. The fleet sees the return of the French crew on Team Vision Future, a mainly amateur group from the Mediterranean that recently won their class at the Copa del Rey MAPFRE on these same waters.

“Our goal is to be climbing the learning curve and to enjoy ourselves. This is just our second regatta on the circuit and we learn all the time racing at this level. I am sure that we won at Copa del Rey because we improved in every area by racing at the first 52 SUPER SERIES event this season,” suggests Mikael Mergui, skipper-helm of Team Vision Future.

“Our owner Tony Langley has now done ten World Championships and it is always special to him to compete. We come here having missed two events and so we are hungry to make an impression, to get some good results and hopefully spring a few surprises.”

“On the water we [the two Phoenix teams] are rivals and we compete equally against one another.” 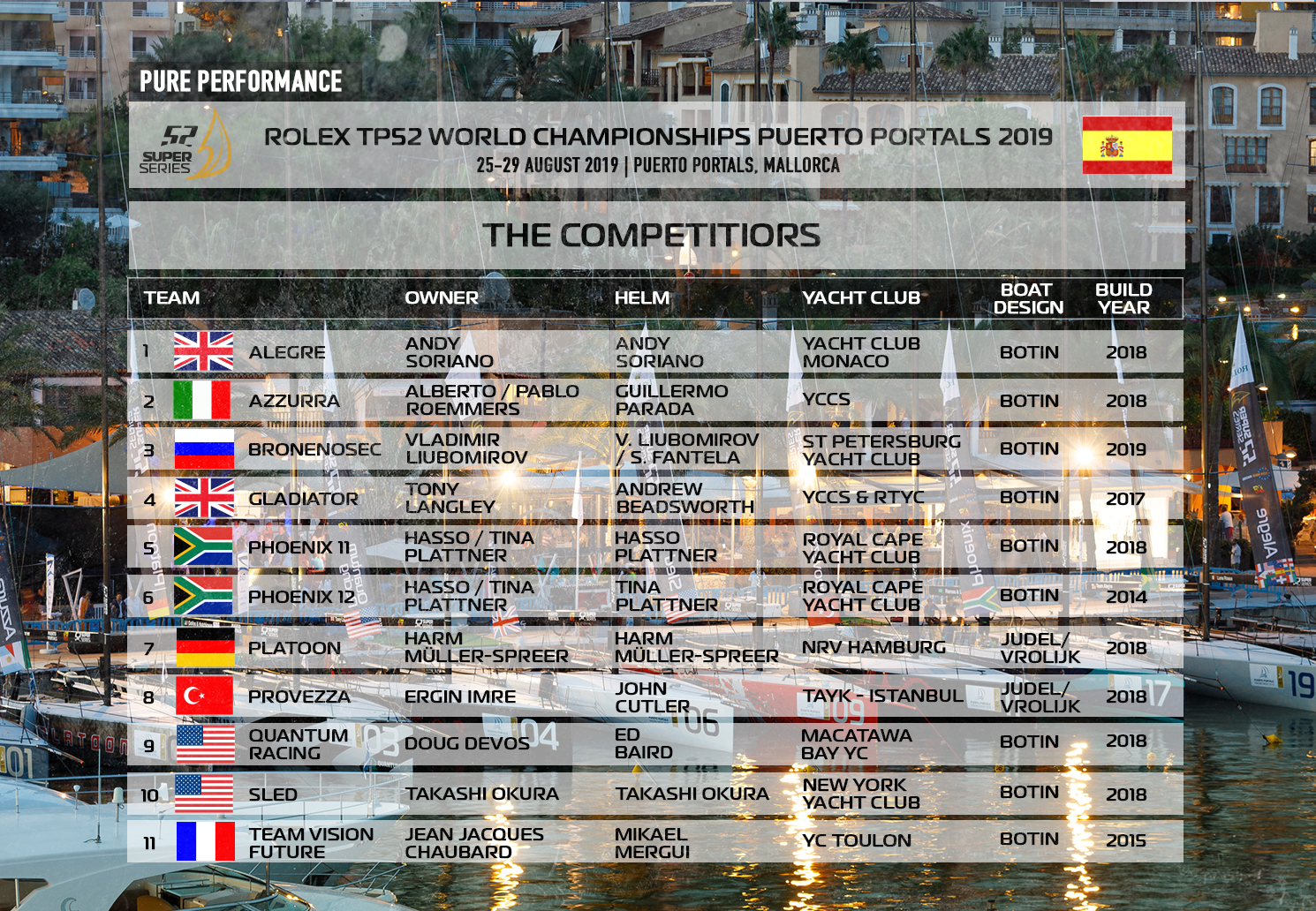