Wide Open, Going to the Wire!

While Quantum Racing’s four points aggregate for the day was the best, most consistent scoreline of the day, nemesis Azzurra were always in fightback mode, albeit relatively successfully, while Harm Müller-Spreer’s Platoon won the first race, but could only make a sixth from the second windward-leeward contest. 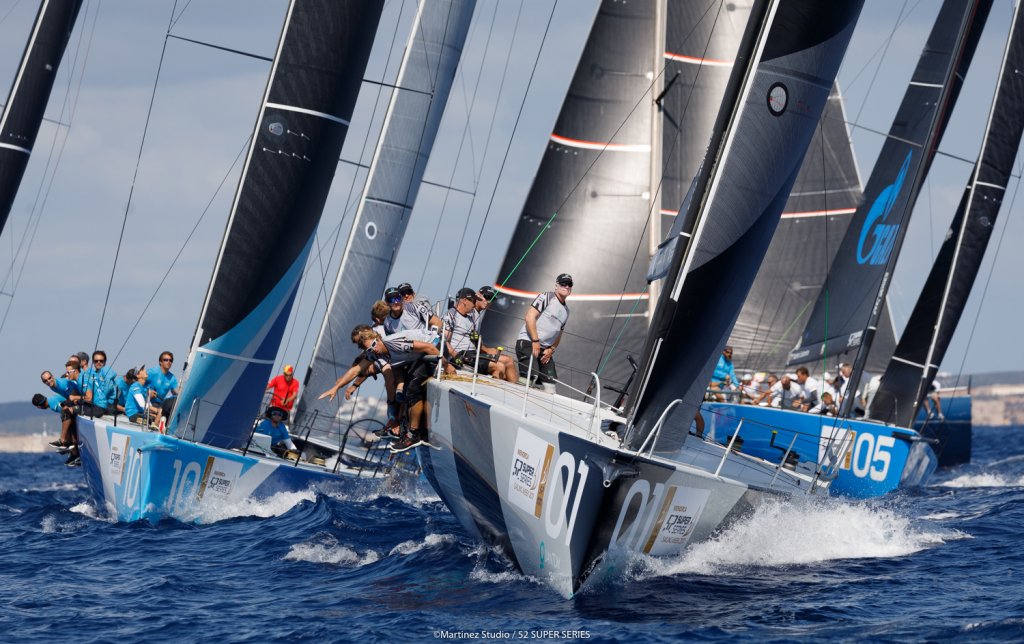 Quantum Racing had the most consistent scoreline of the day.

The net gain for the day was to the current champions Quantum Racing who have now closed back to be nine points behind Azzurra. And while Terry Hutchinson’s demeanour on the dock was somewhat brighter than yesterday when they went from first to seventh, this time it was his Latino rival Vasco Vascotto who was visibly frayed around the edges when he came ashore.

“I shall in fact be 48 years old in 15 days, but after a day like today I feel more like 75 years old. It is very difficult and so stressful. The wind is quite crazy.” Said Vascotto, “We had two very good starts in fact today, but it seemed like the guys who started worse but went right got a personal right shift and won the race. We tried to stay with them but we never got these shifts. It seemed like we lost today from the right and from the left. But in the second race we sailed well. In fact as a team we fought hard to come back and did a nice job in both races to make places. We managed quite well in the second race to just cover Platoon and to come back a little and gain some places behind Quantum Racing. The day was stressful, but we played it OK.”

@azzurra.racing hold their lead at the top of the season table #pureperformance #sport #sailing #boats #tw

In the first race Platoon started at the signal boat end of the start line to windward of Quantum Racing and Azzurra and were able to lead around the top mark from Quantum Racing. As the wind eased, Quantum Racing closed right back into Platoon at the second windward mark, requiring the German-flagged team to double tack up to defend just before the last turn, but Platoon were able to hold on to take the winning gun. Ironically, for the team that has been one of the most consistent this season, this was the first win since Miami for Müller-Spreer’s crew, one which actually has four Olympic medallists in their line up: John Kostecki (silver 1988), Jordi Calafat (gold 1992), aft grinder Martin Kirketerp (49er gold Qingdao) and coach Morgan Reeser (silver 1992, behind Calafat).

Platoon struggled in the second race of the day and were not able to effect the same kind of fight back that Azzurra did. Bronenosec, with Francesco Bruni and Morgan Larson, worked well together, made hay on the left of the first upwind and were able to lead Quantum Racing through the finish line to score their second win of the regatta. It was on the second, shifty downwind that most of the place-changing occurred among the middle order, Rán Racing dropped from third to eighth, Provezza’s up and down progress saw them up to fourth at one point having been all but last on the first circuit but the Puerto Portals winners then fell down to seventh by the finish line. But these shifts and changes in pressure spelled opportunity for Vascotto and the Azzurra team who crept up from seventh to cross third, just behind Quantum Racing.

“Our strategy is to win the regatta and that will determine how we come out overall. And the fact that there’s two other boats so close you can’t really match race, you’ve just gotta go out and try to win the regatta and the rest will happen. For us it was a really good day, nice to bounce back after the very disappointing race yesterday where we led all the way around and then got very screwed over. So it was nice to show everyone what we’ve got. We just did our normal stuff, to go out there and sail the boat well. Terry did an amazing job calling the shifts, and Doug steered the boat well and we felt like we were sailing fast. It’s kind of what we normally do, consistency… just chip, chip, chip. Nothing special, but it was bloody nice to go out there, especially after yesterday.”

With two days of the 2017 season left, Azzurra still lead the overall table on 185pts, Platoon are very much in touch on 190pts and Quantum Racing are on 194pts. The title race is still wide open.

The win for Bronenosec is a morale boost for the Russian-flagged crew, taking them to fourth overall for the event, which is led by Azzurra. Of their two wins from four starts Bruni said:

“The whole team is doing a great job. And the more that me and Morgan are sailing together, the more we are seeing the same things on the water. Today we also had a very good opportunity to finish strong in the first race, but finished 5th. But anyway we are having fun, the boat is having fun, sailing fast, so so far so good.” 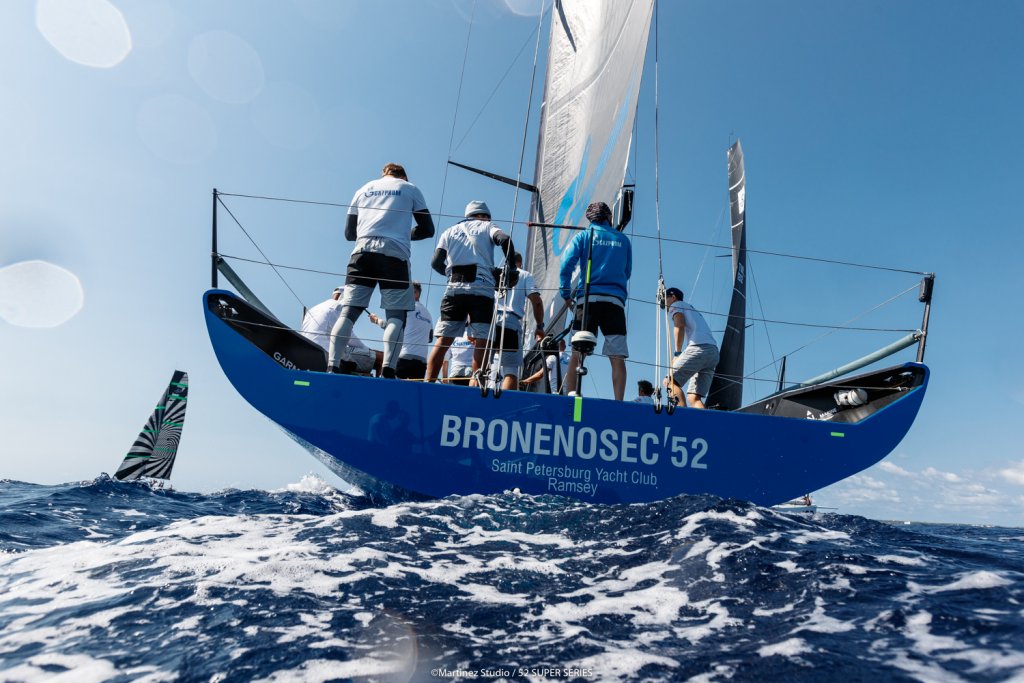 On 52 SUPER SERIES TV Live today, the CEO of the 52 SUPER SERIES Agustín Zulueta confirmed he expects there to be eight new build TP52s on the 2018 52 SUPER SERIES circuit, anticipating the return of Brazilian owner Eduardo de Souza Ramos who is building a new boat, while several America’s Cup teams have had representatives in Mahón. or are expected to visit Menorca over the final days of the season. 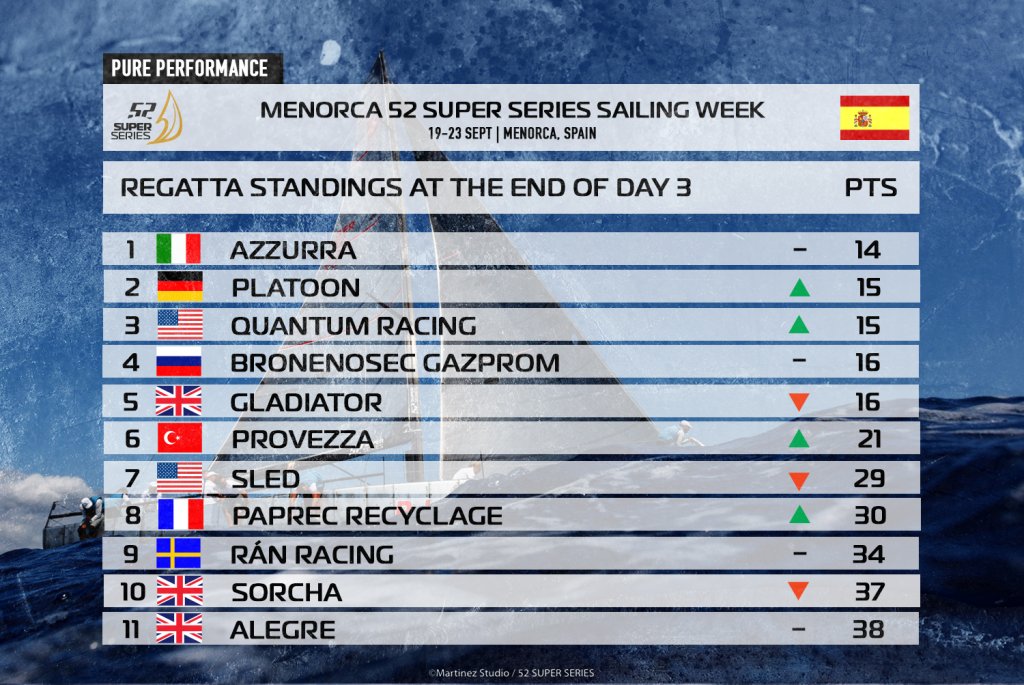