The 52 SUPER SERIES has agreed an exciting new partnership with globally renowned Scorpion RIBs that will see the UK-based RIB specialists join the world’s leading monohull racing circuit as a Technical Partner for the next two years. The visual centrepiece to the new agreement will be the Scorpion Serket 98, which will become the official media RIB as of the first regatta of the 2020 season.

Just as the performance levels of the teams in the TP52s have risen incrementally each year since the circuit launched nine years ago, so too have the demands placed upon the circuit’s media RIBs.

The 52 SUPER SERIES has made use of a variety of solutions over recent seasons but now with Scorpion RIBs supplying one of their top spec boats, the circuit’s hard working, talented TV crew will finally have continuity of high performance, maximum stability and manoeuvrability in all weathers and sea conditions from one event to the next.

“When we are expected to produce a high calibre of images no matter the weather and sea conditions we need complete reliability and to be able to work in close proximity to the teams and move swiftly from mark to mark; we really do need to have a RIB which is commensurate with the TP52s performance and standing. So, we really are delighted that Scorpion have stepped up to the plate as Technical Partner and supplied us with this rather wonderful RIB,” Agustin Zulueta, the CEO of the 52 SUPER SERIES highlighted.

In keeping with the 52 SUPER SERIES sustainability policies, this will be the first time the company has fitted a single engine, in this case a 350hp Mercury, to this 10.2m RIB model. Trials have delivered exceptional fuel economy for a very good performance including a top speed of 46kts. The 52 SUPER SERIES boat has a custom Bimini top to provide shade for the working camera person, drivers and commentator.

“Scorpion RIBs are delighted to become technical partners for the 52 SUPER SERIES. Every Scorpion RIB is hand built to the precise requirements of its owner in our factory in Lymington, UK and they are enjoyed as superyacht tenders, leisure RIBs or chaseboats. Scorpions are widely acknowledged as the best RIBs in the world because the unique hull design gives them the best of both worlds – the highest levels of safety and class leading performance. At Scorpion we go further. We believe in performance with sustainability, which is why we work hard to ensure our boats are as fuel efficient as possible.” 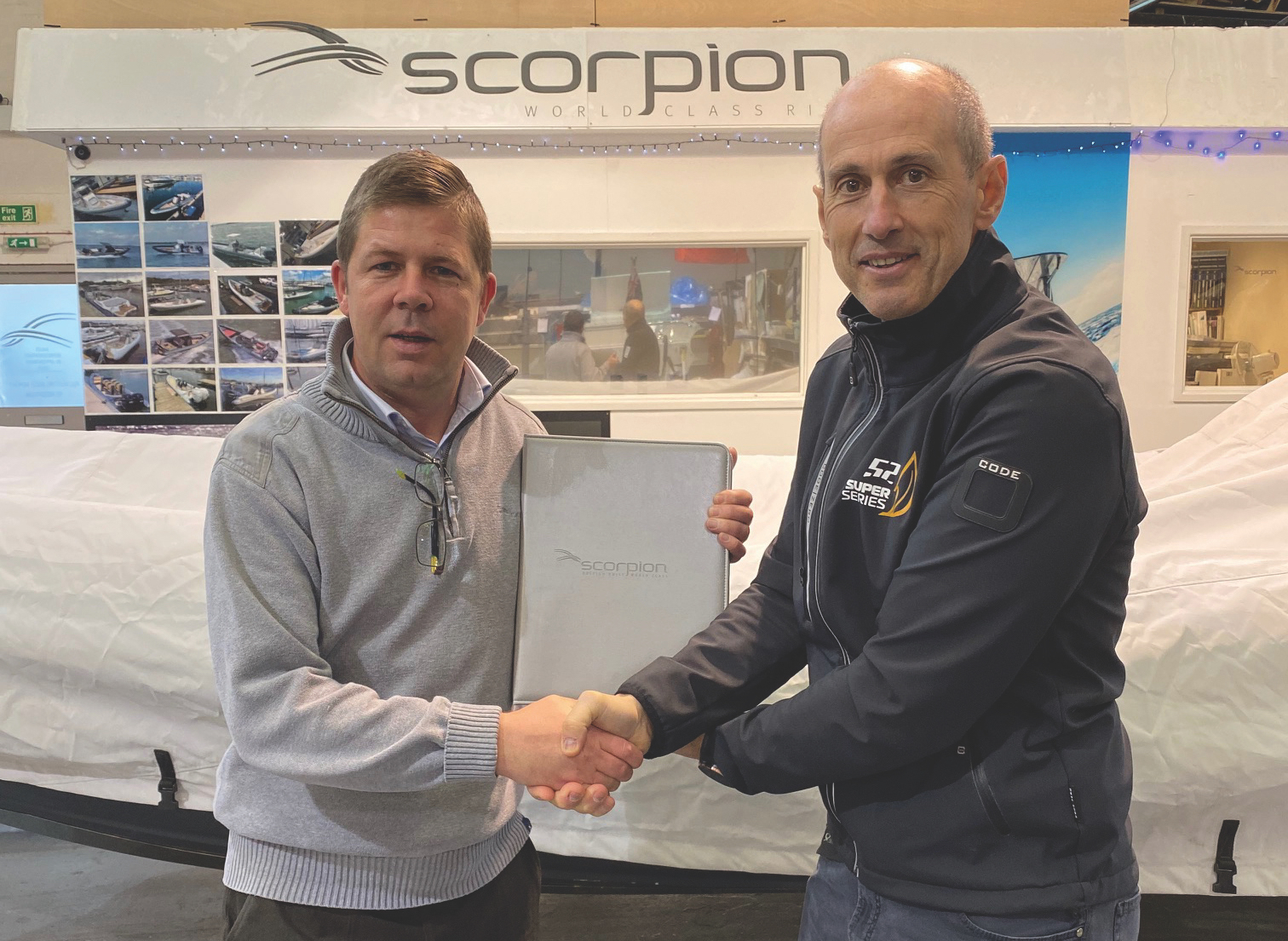 Kevin Hunt, MD of Scorpion RIBS together with Agustin Zulueta, CEO of the 52 SUPER SERIES.

“Scorpion RIBs have been successfully used as chaseboats for events such as the America’s Cup as we were with Sir Ben Ainslie’s team, so to be part of the 52 SUPER SERIES is a fantastic opportunity for us. Keeping pace with the America’s Cup AC45s and their larger counterparts, the AC72s, demands an extraordinary breed of boat. With the America’s Cup catamarans travelling at up to 40 knots in choppy conditions it’s a testing environment for all vessels but one in which the Serket thrived so we’re confident she will keep pace with the TP52s too. The hull design and comfortable ride of the Serket 98 delivers truly outstanding performance and fuel efficiency.

We look forward to the 52 SUPER SERIES and to making a valuable contribution on the water.”

The 52 SUPER SERIES Scorpion RIB has just been delivered to Valencia, Spain and is now en route to Cape Town where the first regatta starts 2nd March 2020.