Steady consistency across the opening three races of the ZENITH Royal Cup MARINA IBIZA sees Quantum Racing ahead of target as they seek to close out their second overall BARCLAYS 52 SUPER SERIES title.

The series leaders scored a 1,2,3 in Ibiza’s light and shifty conditions on a race course area which is laden with very subtle changes in wind direction and pressure. While the crew which is skippered by Ed Baird would definitely like to finish their 2014 season with a third regatta win, that would be the icing on the cake. Their primary goal is simply protecting their overall points cushion – or increasing it – over nearest rivals Azzurra and Rán Racing.

Counting down to Sunday’s prizegiving, purely from that standpoint today was valuable to Quantum Racing. It was only in Race 3 today that they were beaten only once by Azzurra when the Italian flagged team took second behind Gaastra Pro, otherwise their title challengers were increasing their deficit.

Meantime three different crews won races today including race victories for the two teams which are new to the BARCLAYS 52 SUPER SERIES, Takashi Okura’s Sled – which was flown to Europe for this one regatta only – and Marc Blees all star cast on Gaastra Pro. Winds were light and shifty, small changes in pressure and direction proving important to read. 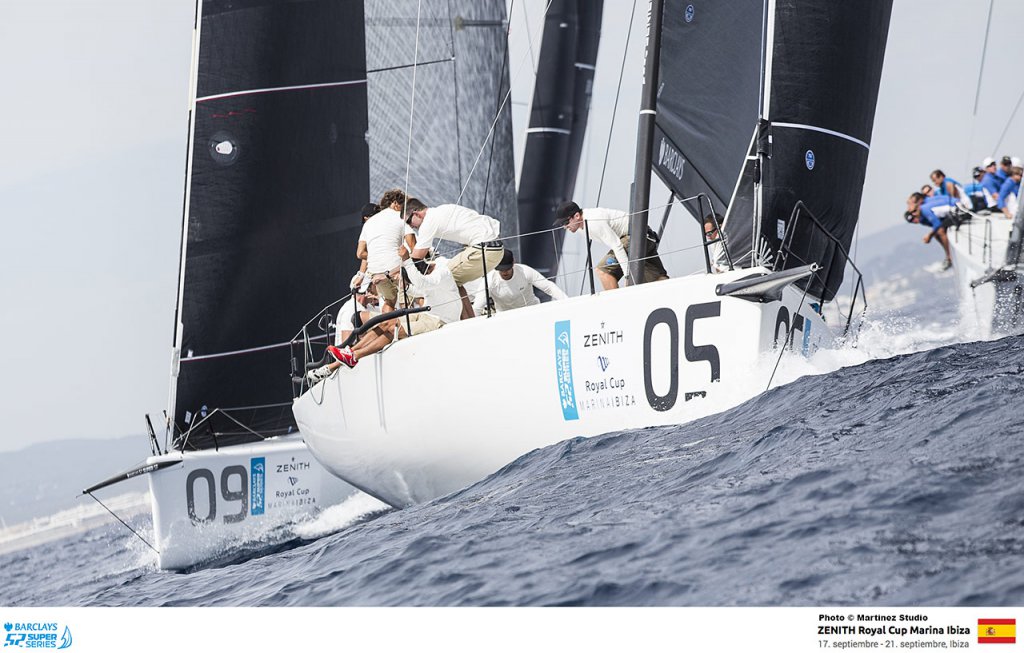 Quantum Racing were on their game, reading the small differences well and staying in step with these changes. And it was as much about their ability to go forwards in the fleet, returning three podium finishes from three starts which will be key this week. Quantum Racing’s tactician was as pleased to have rescued a third from the third race when he felt at one point they were last, as he was with their opening race win:

To get a third out of that was good because there was a time when we were probably last.
That first race we had a plan, executed it and it worked it. In the second race same thing. In the third race we got the start we wanted, we had a discussion about being one more boat up but in these lighter conditions being leeward boat is such an advantage, you get something for it.
It was a little bit of swings and roundabouts.

So with their 1,2,3 Quantum Racing lead the ZENITH Royal Cup MARINA IBIZA by four points ahead of Azzurra and Rán Racing.

With slightly more breeze at the second start Quantum Racing were away cleanly again while Phoenix started early and struggled to get back and re-cross. Azzurra were judged to have fouled Gaastra Pro in a close, early port starboard cross and they had to take a penalty.
Down the first run Sled worked the offshore line and were rewarded with an increase in wind pressure as they closed to the leeward gate, able to ease around Quantum Racing to earn a small lead which they held to the finish.

The wind was fading more by the late afternoon for Race 3 as Gaastra Pro’s tactician Mark Mendelblatt guided them out to make a big gain offshore, arriving at the first windward mark with a good lead over Azzurra. Quantum Racing managed to wriggle up to third which they held to the finish while Rán Racing stole fourth from Phoenix right on the finish line to ensure they finish the day on the same points aggregate as Azzurra.

The goal today was six points or less and we thought there would be only two races. The breeze filled in a little bit nicer than we anticipated so to come off the water with six points from three races is a good day. High marks to everybody on the boat. It was not an easy race course. The most straightforward part was the middle race for us. You have to give Rán Racing high marks for the first race, they snuck around us downwind and we snuck back around them upwind. And we kept backing ourselves on our decisions downwind and in the second run to the finish it went quite well.
In the second race we gybed with a minute and half to go to the left gate and both Sled and Rán went behind us and Sled got ahead of us. There are a lot of little subtleties in the breeze here which we learned last year. And the point that we gave up there, we got back in spades in the last race. We liked going right from the position we did. And oddly enough the left ended up winning the beat from a boat which came from about 100 metres behind us. I did not back myself hard enough after looking at the first half of the beat to just send it into the left corner. To get a third out of that was good because there was a time when we were probably last.
That first race we had a plan, executed it and it worked it. In the second race same thing. In the third race we got the start we wanted, we had a discussion about being one more boat up but in these lighter conditions being leeward boat is such an advantage, you get something for it. It was a little bit of swings and roundabouts.
Terry Hutchinson (USA) tactician Quantum Racing (USA)

It is a good feeling to win. We deserved it. The first two races were difficult. We were top three and lost out. We were good upwind and not struggling we had the same speed. Downwind it was difficult to keep with them. And so we did a good job in the third race. It is a good feeling for the moment to have won one. I think it is good for the class to have three different boats winning. It shows for sure that the older boats can compete in this class.
Marc Blees (NED) owner-driver Gaastra Pro (NED)

We are here just trying to be in the mix. It was nice to get that win in the second race. Everyone is doing a really good job on board. Mr Okura is steering really nicely, getting off the line well which makes it easy for me. We have done four events on the east coast of the USA and a couple of offshore events as well. So I think that has really helped us and we have kept the same team. Everyone is pretty familiar with one another and the boat. It was all on that first run, we had a little more pressure and we just got stronger and stronger as we got nearer the bottom gate and we had a clear exit. That was that.
Ross MacDonald (CAN) tactician Sled (USA)