In this white hot grand prix monohull fleet which features nine brand new boats each making their major regatta debut, top line consistency has proven nigh on impossible. With seven races of the event’s 10 scheduled windward-leeward courses now completed, every team has now suffered with at least one close encounter with the back of the pack.

Soriano’s crew – current holders of the Maxi72 world championship title – were the best scoring team today, aggregating 13 points with their 2,9,2. Emphasising just how easy it is to drop down the fleet as a result of the smallest tactical or boat handling error, Rán Racing’s seven points tally after three races was heavily ballasted by their 10,5,7 from today. Niklas Zennström’s crew are now second, eight points behind Alegre.

The Alegre crew lead by tactician John Kostecki supported by strategist Kelvin Harrap, have continued to start very well – fast and well positioned – but they have mostly had the speed to hold their lanes and maintain good, early positions rather than find themselves fighting to climb through the fleet.

In the first race today, the lightest seabreeze yet at 7-9kts, they lead early on the first beat but only just lost out at the top mark to a fast advancing Azzurra which had hooked into a good vein of lifting wind pressure on their approach to the turn. And in the third contest they stuck to their game plan and lead the pack in pursuit of Vladimir Liubomirov’s Bronenosec which became only the second team along with Alegre to have won two races at this regatta.

Clearly Soriano’s team have excelled in putting together their TP52 programme. The core of their crew are regulars on the Maxi72 of the same name and so communication between the key positions is clear and concise and they have mostly stayed well clear of trouble in busy, high risk traffic areas. The race track may look simple in the sea breeze but in all wind strengths there are ever changing corridors and streaks of lighter and stronger winds all the way across the arena.

Azzurra, second overall on last year’s 52 SUPER SERIES, had a better day. They composed their first race win of this regatta when they linked together strong start, speed and tactics. An eighth and a fifth thereafter gave them the second to best tally for the day which takes them to lie just two points off third place.

Takashi Okura’s Sled, regularly knocking on the door of the top positions, cracked it in the next race as the sea breeze built to 12-13kts. They lead around the top mark with Harm Muller-Spreer’s Platoon in second, this top duo eking out a good early lead. Xio and Paprec had a spirited scrap over third and fourth with Jean-Luc Petithuguenin’s French crew taking third from the Italians which races the former Quantum Racing, on the finish line.

The third race went to Bronenosec. After a 9,6 from the first two contests the win for the Russian team vaulted them back to third overall.

With three races left, today may yet prove to be the critical stage of the regatta but with two points only between Bronenosec in third, Sled in fourth and Azzurra in fifth the fight for the podium is still open. 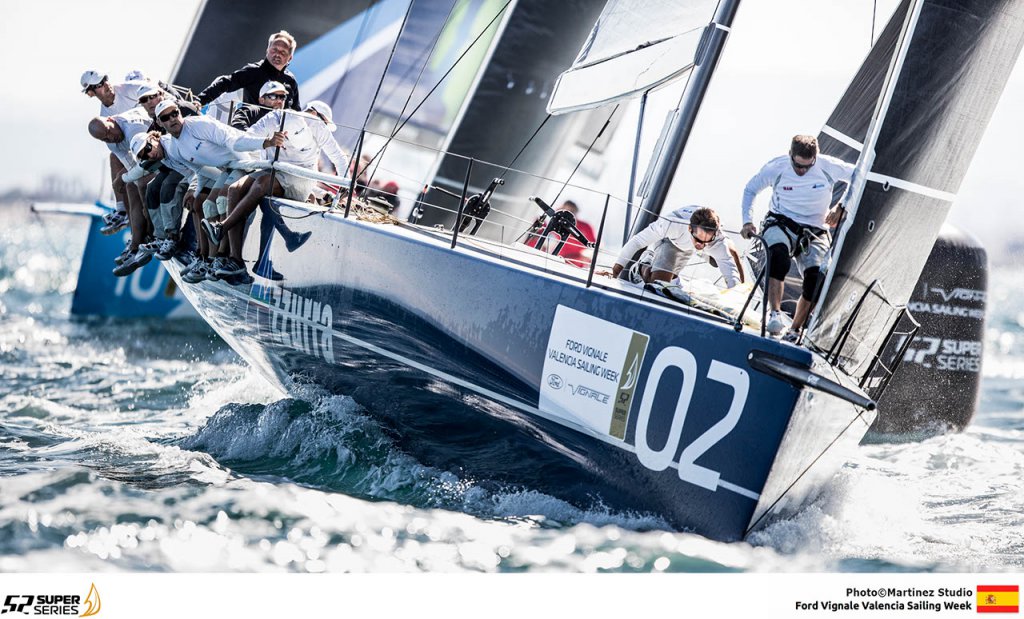 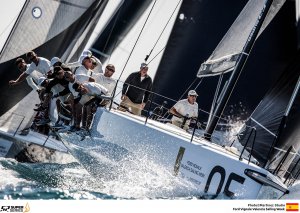 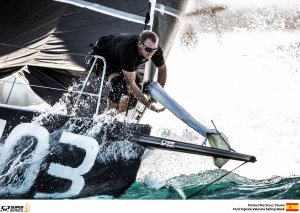 We had a great first race, the second race was not so good, its certainly easy to fall back in this fleet, everyone is so good, so its nice to come away with a good average score for the day.
We have managed to get off the start line pretty well and in the races when we haven’t done so well we have made bad starts, so it’s really come down to the starting and picking the side that we have liked off the line.
The core of the team sailed on the team on the mini maxi last year and bits of communication from sailing together last year makes a big difference, it’s just a different class but the same principles are applying.
It’s so easy to have a bad race. Andy did a really great job today, its tough on the owners having three races, we were out tyere for nearly six hours so Andy did a great job in that last race with great concentration and focus.
Kelvin Harrap (NZL), strategist Alegre (NZL)

In the bad days when you need to support each other, you need friends around you and for sure I think we are not doing a perfect job but I think we know were we make a mistake and can improve during the season and at this event. We are lucky that we are still quite close to the leading boats except for Alegre who are doing a great job. When John Kostecki has a good week, it’s difficult to beat him. I hope that he will have some other bad days! We are pleased about our speed. We are happy about many things. We need to learn as much as we can from the mistakes that we are doing because for sure we are doing some mistakes!
This fleet is very different to last year you know there are 12 boats and anybody can win. An average place of 4th maybe will be what you need to win the circuit and this event. In this fleet. There are plenty of champions in this fleet.
Vasco Vascotto (ITA) tactician Azzurra (ITA)