If the Bay of Palma has a reputation for consistent, steady seabreeze conditions, the second race of the day rather upset that notion. A 25 degree shift in wind direction complicated the first run, the prelude to a funky, challenging second half of the race, which was completed in a dying, very unsettled breeze. After winning the first race of the day, Race 3 of the world championship, Sled were able to hold fast through the tricky moments.

After missing the Cascais regatta last month due to other sailing commitments, the Sled crew are making up for lost time, but tactician Adam Beashel maintains that their approach here is no different to elsewhere with the 52 SUPER SERIES:

“There is not a lot changed between here and our normal approach to any other regatta. We are having a lot of fun together and have gelled well as a team. It is a lot of fun when you are out there at the front of the fleet, but this crew really sticks together the whole time through thick and thin. We have the boat going really nicely with a couple of new sails. Mr Okura is very locked into the boat and he loves the conditions at this venue.”

Sled replicated the start that worked for them as the launch pad for their Sunday afternoon race win when today they started close to the committee boat, but then had the pace and early advantage to be able to cross to the beneficial left side. They led all the way round the first course, and on the second followed Andy Soriano’s Alegre through the finish line for second.

Platoon, 2,3 for the day, remain pleasingly consistent even if owner-driver Müller-Spreer was frustrated that others among their rivals profited more when the wind became so changeable in the second race. But the past world champions are in a very strong position at six points ahead of a group of four boats, all on 20pts.

“We’re right there in the money, so we’re happy. We feel like we’re sailing pretty fast and pretty well, so just see what tomorrow brings!”

“Yesterday we didn’t start so well, and today we started better, so that’s all good. Our strategy is to take each race as it comes, try and do as well as we can. We were a little bit unfortunate there on the second race when it turned inside out, but we’re happy to take the third, it could very easily be a sixth or worse when it switched around.”

“It’s tough to keep it cool when a race gets as tricky like that. It does get a bit frantic and you just have to hit the reset button, so to speak, now and again, everyone stop, calm down, reassess, especially when it’s so shifty with things changing so quickly. Kelvin [Harrap – strategist] did a really nice job with that.”

After breaking their mast on Sunday, Provezza reported today that they have managed to step and dock tune their replacement and expect to race again Tuesday. A frontal system is due to move across the island of Mallorca Tuesday, which will bring some very different conditions and a new set of challenges for the Rolex TP52 World Championship fleet. 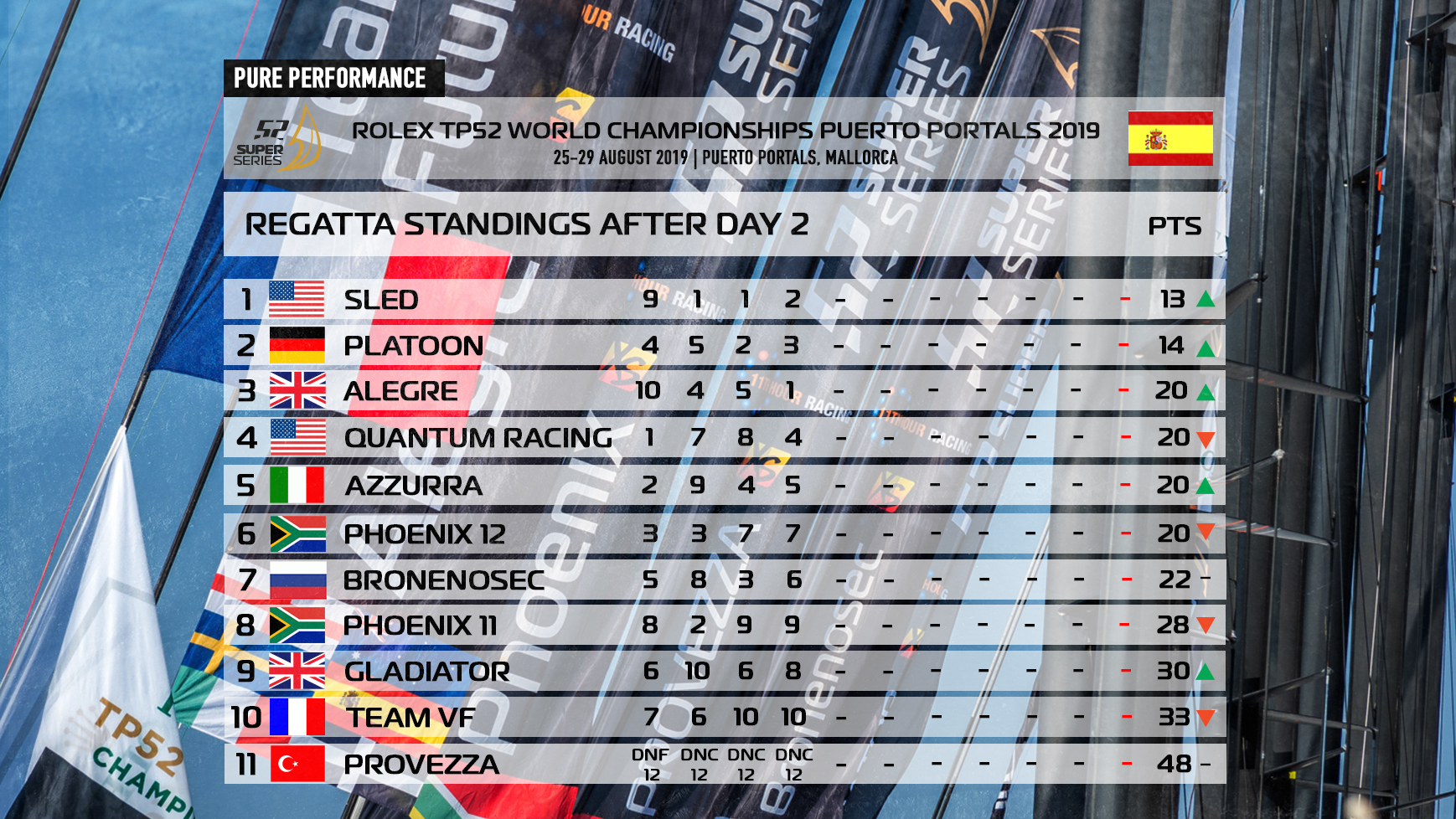