Sled Lead But Azzurra Achieving Their Goals On Home Waters

(Wednesday 25th September, Porto Cervo) – Although it is Takashi Okura’s Sled which holds a narrow lead of just one point after the first three races of the Audi 52 SUPER SERIES Sailing Week Porto Cervo 2019, the home club favourites Azzurra bolstered their bid to secure the 2019 circuit with an excellent opening day during which they added five points to their circuit championship lead.

After losing the first scheduled day to a Mistral wind which was too strong, conditions proved excellent for the first three races of the regatta, the NW’ly wind remaining steady in direction and blowing between 16 and 27 knots to provide fabulous sport for this showdown title decider.

Sled read the wind best in the early stages of Race 1, Adam Beashel and Murray Jones choosing the signal boat end of the start line, working right early to lead Bronenosec and Provezza at the top mark. Platoon were forced to stay left and rounded eighth at the first windward turn behind their title rivals Azzurra and Quantum Racing. Azzurra showed their determination and fighting spirit on the final run as they gybed early on the run to gain and steal third place.

The second race was more typical of Porto Cervo’s windward-leeward set up in the Mistral direction with the left paying consistently. With Ado Stead calling tactics this regatta on Alegre, Andy Soriano’s crew started nicely on the pin end of the line, used the left well and were able to lead Quantum Racing at the windward mark. At the finish line it was Alegre’s victory with Sled second and Quantum Racing third. Platoon only just pipped Azzurra on the finish line, a seemingly fated one second being the time delta between them.

Azzurra looked set to dominate the third race, starting smartly and able to position themselves just to weather of the main group half way up the beat as the breeze swung very slightly left. That was enough for the Roemmers family team to lift away slightly along with Bronenosec and lead at the first windward mark. But despite setting the pace all the way round the track in a brisk 20-25kts of breeze, once more Azzurra had their thunder stolen – again by a matter of a single second – as Bronenosec, with Olympic champion Sime Fantela steering, surged through the finish line to nick their victory.

“We had a decent day all in all but it could have been better, we lost to Platoon by a couple of metres in the second race and lead the third race to lose it at the finish to Bronenosec. But we put five points on Platoon and Quantum Racing on the circuit standings and we are one point behind the regatta leaders Sled, so we are back in our ‘normal situation’” smiled Azzurra’s skipper-helm Guilermo Parada, referring to their missing three victories this season by one or two points.

“As long as we can keep it consistent and hopefully putting points on our opposition we will be happy. But this was a very typical Costa Smeralda day and we felt comfortable.”

To improve their chances of securing their first circuit title, two times runners up Platoon needed to be taking back points from Azzurra today but their first race, first beat – when they ended up eighth at the top mark – was a modest start to their challenge here. To win the season they need to start better and be able to impose themselves early in the ensuing races.

“We had bad luck in the first race choosing the left side and half way up the beat it was twenty degrees to the right, we could not come back from that.” Grimaced Platoon owner-driver Harm Müller Spreer, “The other two races were average. Tomorrow is another day.” 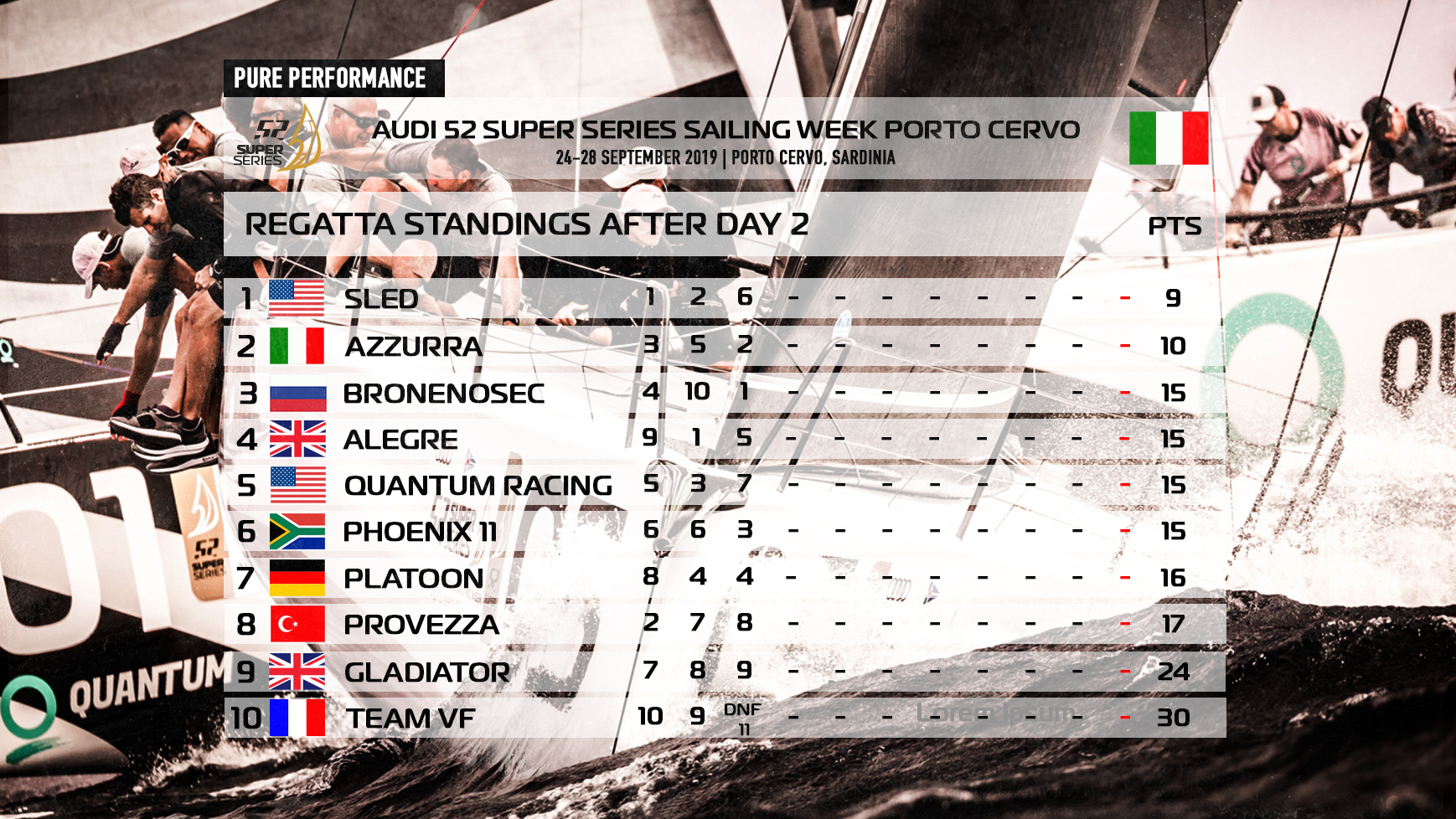