Ray’s Return: ETNZ’s Davies Back to the TP52 on Gladiator in Ibiza

Rán Racing won the official practice race today off Ibiza, the final preparation before the start of the ZENITH Royal Cup Marina Ibiza, the finale to the BARCLAYS 52 SUPER SERIES.

In gentle breezes Niklas Zennström’s team made the best of the shifts early in the race and we able to keep a loose cover on Azzurra and Quantum Racing to cross the finish line first after a preliminary contest which surely gives an insight into what racing conditions are expected to be light.
Racing starts in earnest Wednesday when the capricious weak winds are due to continue ahead of potentially an even lighter day Thursday.

Running simultaneously with the Olympic Classes ISAF Sailing World Championships in Santander in the north of Spain, there are several key crew changes, some as a result of the clash.
Indeed on Rán Racing Adam Beashel, the ETNZ strategist, is stepping in for double 470 world champion Nic Asher. Santi Lange (ARG) is absent from Phoenix where Andrea Fonseca moves into the tactician role, and on Provezza – which has a new rig – Britain’s Soling Olympian Andy Beadsworth takes over the helm from compatriot Nick Rogers for this regatta.

But possibly the biggest buzz in Ibiza right now surrounds the return of Kiwi Ray Davies to the fleet. The ETNZ tactician has purposely taken time out after their disappointing 34th America’s Cup loss to Oracle Team USA. Ray Davies won the MedCup in 2007 with Peter de Ridder’s all conquering Mean Machine team which had Team New Zealand as its beating heart, as then he won twice in 2009 and 2010 with the full Emirates Team New Zealand crew under skipper Dean Barker. Deeply into sailing smaller boats right now, A Class catamarans and Moths, Davies has not stepped on a big grand prix racing yacht since the Cup – until last week. And here the shoes that he steps into at the back of Gladiator are those of none other than Cup winning strategist Tom Slingsby. A change of afterguard since Palma sees Davies paired up again with navigator Jules Salter, himself a MedCup winner with ETNZ and Mean Machine. 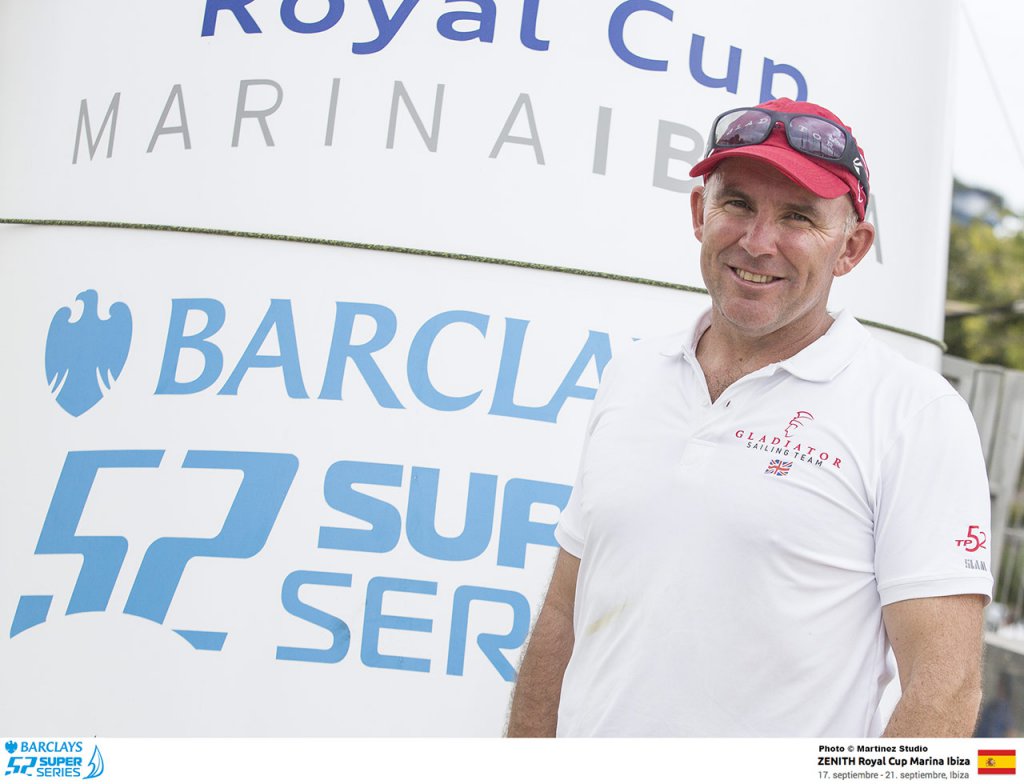 Davies smiles as the years are rolled away and, after today’s practice race, he admits:

It is a bit surreal to be back.

I have been away for several years. It is fantastic that the 52s have survived, a lot of other classes haven’t. And that the commitment to the BARCLAYS 52 SUPER SERIES is there from the management.

Next year looks amazing. I would love to be doing this next year as long as it fits into our programme. We don’t know what our programme is for sure right now. I think we will end up picking a Series to do outside of the Cup sailing. And we will try and all do that same Series. We have just not decided what that would be. We would not necessarily do it as a crew together, it would be as individuals, but certainly on the same Circuit. Of course we have Pete (Burling) and Blair (Tuke) on the Team now and they have their Olympic year but if there are some regatta that all tie in we can train in New Zealand together and then all be away at the same time then that would be ideal.

In light conditions, a podium place is not beyond the reach of Tony Langley’s Gladiator team:

The Gladiator team has some really good sailors on board. But we have our work cut out. The boat is a little bit older but in the lighter airs it does perform quite well. But we have a lot of things to work on. It is the first time I have sailed on this team. Of course I have sailed with Jules (Salter who is on Gladiator this week as navigator) on the Mean Machine and Emirates Team New Zealand. And so that is very easy. It was great being back on a boat with him today. The goal for this week is to keep improving like every one is, and to be realistic in what our goals should be. But if we could end up on the podium at the end of the week then we would be over the moon. I had a chat with Tom Slingsby to tell me what he could tell me about the team and he had a lot of positive things to say. The team is still growing and learning in this type of boat and Tony is looking to have a new boat for next year and that will make life a lot easier for him. The goal this week is to learn as many skills in this boat and hopefully get a little bit more speed next year. It looks light this week which is good for this boat, for sure. We have to work on our starting. It has been an issue in the past that Tony has identified. So we have to work on that.

Today we had two practice starts and the practice race start and got off OK in all of them, so that is good. That is positive. For sure I have done a lot of sailing with owner-drivers and that is good, it is a question of working on the communication and with the trimmers, and Jules and it is a big dynamic. It is really tough off the line, every situation is different, but I think we don’t want to complicate things too much this week. We will try and find a hole and defend it and get off in good shape relative to the boats around us. It is tough though when you look at the calibre some of the helmsmen here who are accurate to within one foot all the time. It is a battle, it is a challenge, but a great opportunity for Tony. This class offers that chance all the time to sail against the best. I am going to enjoy this week, for sure. It is great to see so many friends again, some I have not seen for a while. The reaction has been great. We have all had some great battles against each other in the past and are looking forwards to some more this week. It is fantastic to see what Terry Hutchinson has done with Quantum Racing, the professionalism he brings to the sport and the high standard, it is has the respect of the team that is clear. It is a standard to aspire to and the teams here can measure themselves against their peers. That is part of the game for use here, too. When you are here with a new team you are trying to encourage that side of the team.

Small boats have reinvigorated Ray, proving something of antidote to the inevitable post Cup Blues:

It has been a quiet year since the Cup, by design. I had chosen to get back into some small boat sailing. I did the A Class Worlds in February after a couple of months training and thoroughly enjoyed that. It is good to get back into small boats and the A Class is now foiling too, and so it is relative to the America’s Cup too. I have had a Moth for seven years so it is an older design but I have put some modern foils on it which has brought it a little bit more up to speed. I did not do the Worlds but the next Worlds are in Melbourne in January. So the intention is to do the next Worlds but I have to see how the training goes in November and December. I am way off the pace at the moment and so I need to throw a bit more money at it and get new boat maybe, and so I need to earn a few dollars to spend it on the Moth. Like the A Cat it is so refreshing to be sailing dinghies which is where we all learned to sail. Getting back into boats like that when you are in your 40s is good for your big boat sailing, even just for your intuition, not relying on the numbers all the time.

Life has been tough since the Cup. It has not been easy to shake off the disappointment of ceding a big lead, losing to Oracle Team USA. It is something he lives with every day:

It was terrible. It was really frustrating. It was an extremely good opportunity we had to have won. We started the regatta so strongly and let it slip. There are not too many personal regrets. We look at a lot of the decisions we made, we made a lot of really good calls through the Cup but a couple of bad ones. We got more right than wrong in terms of the whole team and the sailing side of it. I think at the end of the day they had more potential to get out of our boat than we had to get out of ours. We kind of tapped our potential earlier and the regatta dragged on and on and they got harder and harder to beat.

There are calls he made on the water which he regrets:

There are a couple races I regret, decisions I made on the water.

For sure there was a light airs race where we had caught right up to them, and we gybed away and ran out of breeze. That was an opportunity to keep the pressure on. You look at them and they did make a lot of mistakes too, early on. Towards the end both teams were sailing really well. But every regatta you do there are moments when you could have done it better.

You still go through moments when you think ‘Life would be so much different now if we had pulled it off, because it is such a huge event and a huge consequence, winning or losing. It is dramatically different situation to the one we are living now. Had we won it we would be pretty busy at the moment. At home it is very quiet on the sailing front, very quiet. Deano has bought himself a Moth too. So whenever we get a spare moment we are out sailing the Moths together. I am heaps better than him!!!! Actually we are pretty close but I have been doing more than him, but we both have a long way to go. The goal is to be able to foil tack and neither of us are doing that yet. We have a training camp coming up which will be great for us, there are six of us sailing Moths. We have some good coaches coming in and we are really looking forwards to it. It gives you so much energy for your sailing. It is a lot of fun and it is back to basics again.