From one of the most dramatic last day 52 SUPER SERIES finales, Niklas and Catherine Zennström’s Rán Racing won the Porto Cervo 52 SUPER SERIES Audi Sailing Week title on the last downwind.
While there was elation for the ice cool Swedish owner-driver and his hard working crew there was huge disappointment for Quantum Racing and for Provezza who both within minutes of each other had one hand on the top prize, before gear failures successively dropped them from contention.

“Winning is what we’re here for. We knew that we had lots of improvements on how we sailed the boat. We knew we had the potential to win. But it was really close coming down to that last downwind. So it feels really good” 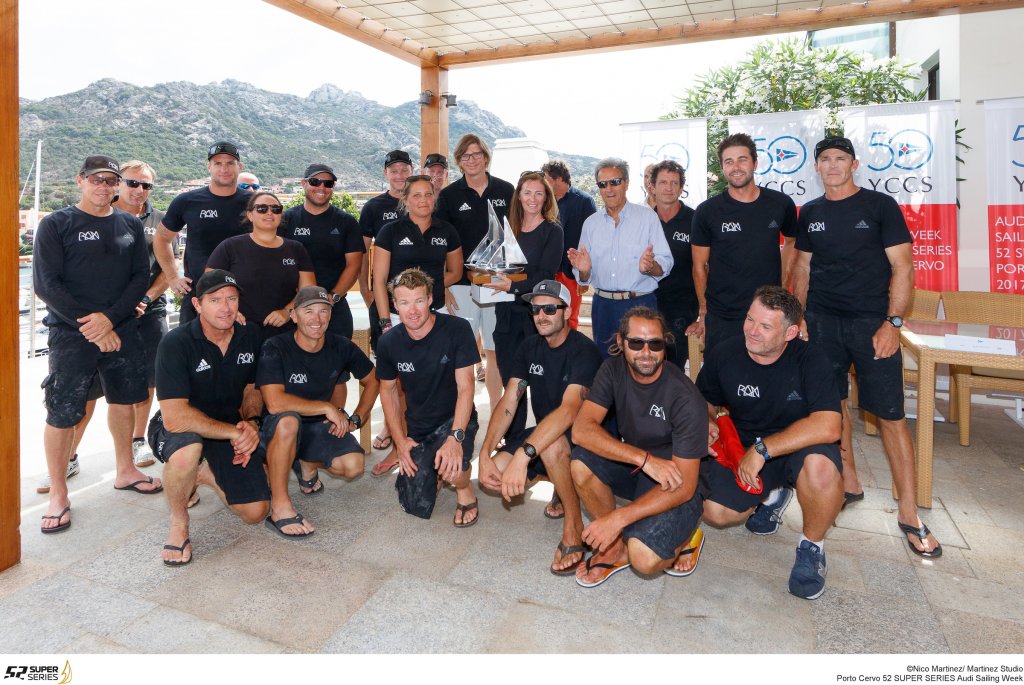 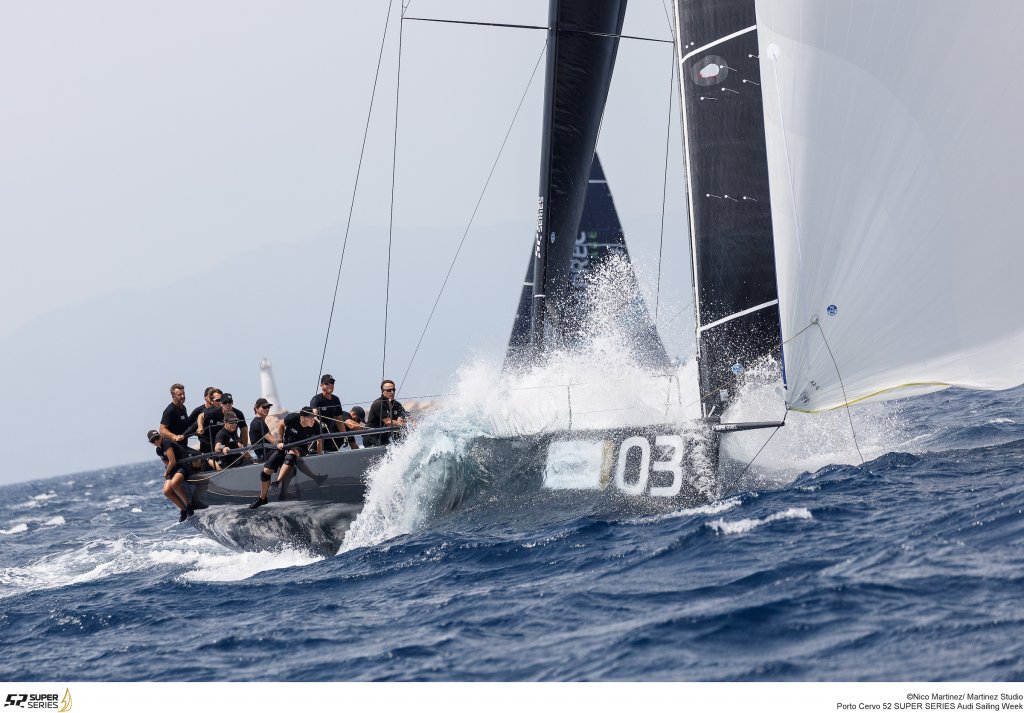 Without question this fourth regatta of the 2017 52 SUPER SERIES has been an emotional roller coaster for many teams. But while the elation for the Rán Racing crew bubbled over immediately after finishing, winning their first event since Valencia’s 2015 season opener, the unfortunate gear failures robbed first Quantum Racing of the title when they were lying six points clear at the top of the event standings, with – as disappointed tactician Terry Hutchinson pointed out – ‘just 12 minutes of the race left to sail’.

A strop inside the boat which supports the forestay gave way just after the leeward gate turn. Only their quick reactions saved their rig. According to Hutchinson the failure is believed to be the same as caused Alegre to lose their mast on Friday.

Hutchinson was doing his best to look at the glass ‘half full’:

“To lose to a gear failure is frustrating. We had only 12 minutes or so of racing left! The beginning of the regatta we did to ourselves.”

“ We had sailed some really good races, some good starts and really had sailed well most of the time. I was bound and determined that what happened on the first day would not determine the outcome of the regatta. It didn’t. We had a gear failure happen inside the boat. We need to go back and revisit the situation with our supplier. But right now it is about the glass half full. We still have a mast. But there will be a lot of work because the boat accepted a lot of shock loading. We stopped the boat instantly. We went head to wind and because it was so windy we were going in reverse quickly. The guys worked quickly to get one and then another halyard forward quickly we had the boat going seven knots in reverse. We saved the mast.”

“ A strop broke. It is disappointing. Our guys do brilliant work with the boat. It is meticulously prepared. We are very critical in that aspect.”

In the blustery 21-23kts Mistral conditions Ergin Imre’s Provezza had just got themselves into a winning position at the top of the last beat. They were chasing leaders Azzurra round the last mark of the course, and so leading the three way tie between them, Rán Racing and Bronenosec. Whichever crew crossed the finish line first after Azzurra would win the regatta. Suddenly Provezza had one hand on the Porto Cervo title, and with it a chance to atone for Key West in January where they shed a two point lead on the last day with a bad start. But no sooner had they taken the regatta lead than a shackle failed on the kite during the hoist. Unable to sheet the spinnaker on they were almost dead in the water, struggling to find a solution as Rán Racing surfed past in spumes of spray. For Rán Racing there was echoes of Miami in 2013 when they surfed past a broaching Azzurra on the last leg to win the TP52 World Championship.

Almost all of the top contenders had at least one bogey race. Quantum Racing started under a cloud when they had to retire from the first race because they wrongly sailed through the finish line when not on the finish leg. Platoon, recently crowned World Champions were over the start line in the second race and crossed the finish line last. Azzurra and Rán Racing both counted tenth places in their final scoreline.

But this has probably been the closest fought event of the season. Four different teams lead the regatta at different stages. Rán Racing win by just one point ahead of Vladimir Liubomirov’s Bronenosec who take their first podium of the season, sailing a more composed, consistent event after recruiting Tomaso Chieffi to the afterguard to complement tactician Morgan Larson.
Quantum Racing finish third overall but three boats finish just one point behind them.

“This gives the team a little confidence. It is such a challenge because this fleet’s so competitive. We came out quite strong with a great team. So far we just had some little things go wrong and a little bit of bad luck and we just had to hold to the spirit of the team and try to not change too many things and know that eventually we’d find our way. Obviously Tomaso brings a wealth of experience and a lot as the senior player on the team” 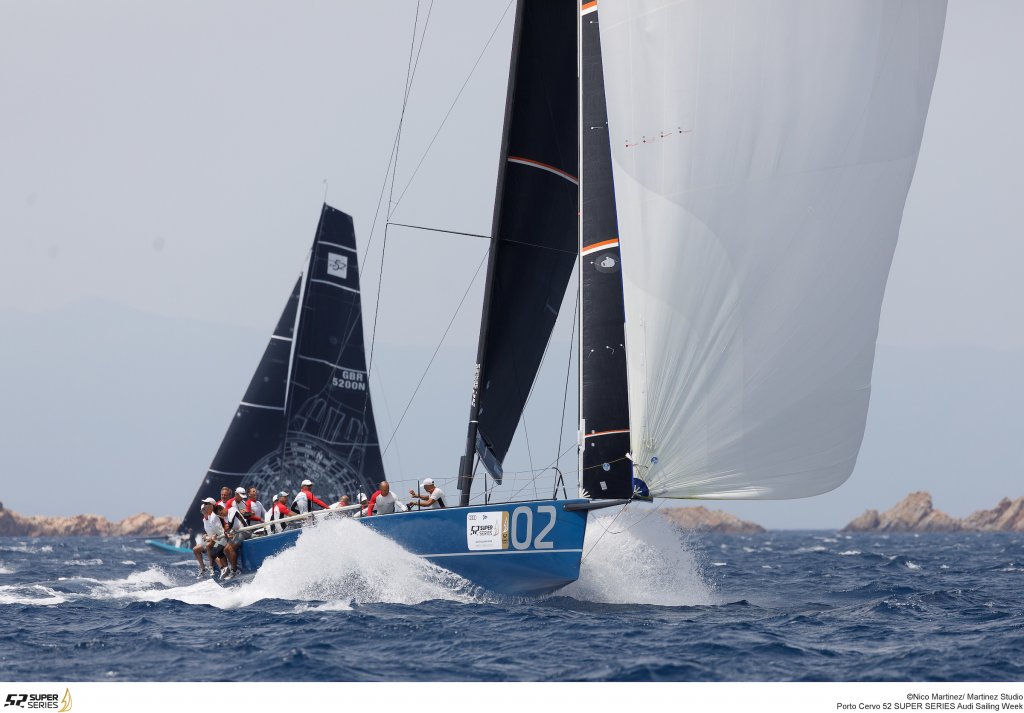 Azzurra, finishing 2,3,1 take fourth overall but take over the leadership of the 2017 52 SUPER SERIES by a single point ahead of Platoon. Provezza’s resulting seventh in the last race dropped them to sixth, another frustrating final day for Ergin Imre’s crew who have sailed well enough to have won a regatta by now. Provezza’s navigator Nacho Postigo commented:

“ It was a little bit unlucky. If I tell you that we’re still happy it would not be true. But we are relatively happy that we sailed well and that the boat was doing very well. So bad luck is bad luck. We were rounding the windward mark 2nd and in a position to win the championship and the tylaska decided to open and not co-operate.”

With four regatta sailed of the six which comprise the 2017 52 SUPER SERIES, four different teams have won event titles, Quantum Racing in Key West, Azzurra in Miami, Platoon at the World Championship in Scarlino and now Rán Racing.