Quantum Racing profit on Friday 13th, Phoenix on the up.

From a long, hot Friday 13th under the burning sun of Porto Cervo, Sardinia Quantum Racing kept their cool to record a solid 2,3,3 from the first three windward leeward races of the AUDI TP52 WORLD CHAMPIONSHIP and extend their overall lead to two points going into Saturday’s title showdown.

While the Ed Baird skippered 52 SUPER SERIES champions actually extended their overall margin, the world champions, Rán Racing, may rue jumping the start gun for the third race of the day.

It was a close call, down to just one second according to tactician Adrian Stead, but their need to restart cost them time and although they recovered to a useful fourth, Niklas Zennström’s defending world champions find themselves in third, three points adrift with one day of racing left.

If Quantum Racing are back to their potent best, the day really belonged to Eduardo de Souza Ramos crew on Phoenix. They added astute tactics from double Olympic medallist Santi Lange (ARG) to excellent boatspeed from the fleet’s only new 2015 generation Botin design to compose two very good, back to back wins, promoting them to second overall.

Their 3,1,1 for the day allowed them to leapfrog Rán Racing.

Each race was sailed in different conditions, starting gently and finishing up in the 15-17kts of Mistral direction which had been promised on many different forecasts. Indeed the NW’ly threatened to come in several times, scaring off the existing breeze to require delays between each race.

Rán Racing’s Zennström nailed the first start of the day, accelerating away from the premium position on the line, the pin end, which allowed the world champions to earn the preferred left side of the track upwind. They were able to extend slightly to win comfortably over Quantum Racing. The American flagged team were second around the top mark ahead of Phoenix and the order stayed the same to the finish line. 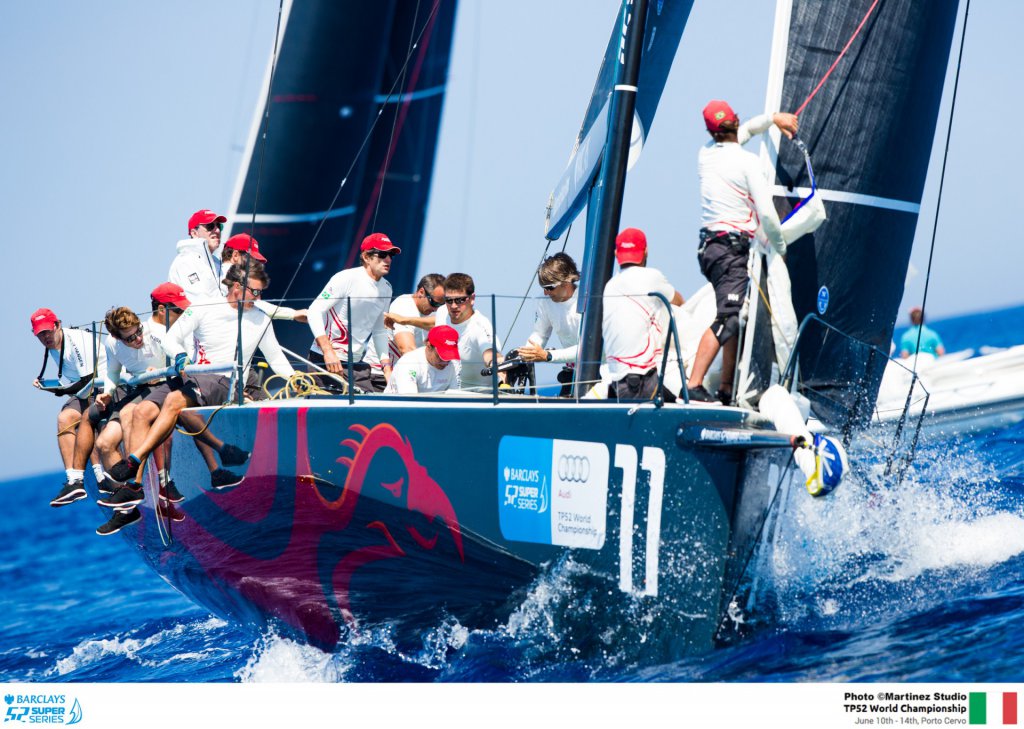 Race 4 of the series and Phoenix were well positioned to tack and take first advantage of the small left shift in the breeze which gave them a small gain. As the breeze moved left the battle to control that side meant two or three boats overstood the layline to the first turn, but Phoenix rounded first ahead of Azzurra with Quantum Racing third and Gladiator fourth.

The Mistral started to come in with a little more force in the final race of the day. The left looked favourite again and in fact Provezza, Ergin Imre’s crew, had more or less gained the advantage when the top two metres of their mast inexplicably dropped off. Phoenix were able to lead around the top mark ahead of Azzurra and Quantum Racing. Terry Hutchinson called a good shift near the bottom of the run and they were able to nick through by the gate, taking second across the line behind the Brazilians.

It was another long, but rewarding day on the water. After two coastal races then three races in a day, Terry Hutchinson remarked wryly:

When we went out this morning having only done two races over the last three days it felt like we had already sailed a regatta.

It was a hard day. I think in so many ways that last race was a really good confidence builder for us. We got tangled up a little bit after the start but we had a glamour first run, the boat was going really well, probably the best we have gone all season downwind, so that was very encouraging but there you go, some days you are the bug and some days you are the windshield, and we survived Friday the 13th quite well.”
Terry Hutchinson, tactician, Quantum Racing

When we went out this morning having only done two races over the last three days it felt like we had already sailed a regatta. You have to take your hats off to the Phoenix team they showed today what 2015 is going to be about and its awesome. They have a nice piece of equipment but sailed a really good day. They were fast and just a click of boatspeed goes a long way in this fleet. But on board Quantum Racing Ed and the guys executed two really good starts and in the first race Rán sailed a good race and we sailed well to get a two in that race. In the last race we sailed a very good race to get a two but our best start of the day we got a three out of it and that was a bit about the over stand, being forced out to the left side, and Azzurra and Phoenix were allowed to play through and that allowed them into the race really. But it was a hard day. I think in so many ways that last race was a really good confidence builder for us. We got tangled up a little bit after the start but we had a glamour first run, the boat was going really well, probably the best we have gone all season downwind, so that was very encouraging but there you go, some days you are the bug and some days you are the windshield, and we survived Friday the 13th quite well.
Terry Hutchinson (USA) tactician Quantum Racing (USA)

It was a special day, especially for Eduardo, we are all happy to have a good day. I think we did everything right to win in this fleet at this level. Our whole team did an excellent job. We started well and had clear lanes and we did not make mistakes and so were able to hold these lanes. Everyone in the team did their bit. We are conservative at the starts, that is the way we need to sail. We are new, we are finding our level and we are learning our methods and our geometry before the start. I always ask for clear lanes and that paid off for sure.  The boat is going very, very well. I don’t feel in certain moments that the top guys are fast and that for sure we are good. I assume we are quicker. They are sailing better than us and have been sailng better than us. Sometimes we are the same and sometimes faster. So for sure we have a good package.  I think we have to go step by step. We go one stage at a time and sail the best that we can and just see what happens. I haven’t thought about winning. We all want to win of course but we go step by step.
Santi Lange (ARG) tactician Phoenix (BRA)

We started off well with the win in Race 3 and were pleased to keep Quantum Racing behind us. The second race we got a bit pinned out to the left hand side and rounded sixth, recovering to fourth. We were scratching at the heels of third so that was OK. And then going into that third race we were one point off the lead but were called OCS, over the start line. 1,4,4 for the day keeps us in the hunt, we go into tomorrow three points off the lead wit two or three races. I am happy with the way we are sailing. We were over the start line by one second and that is how close the fleet is. We are pleased to get a fourth out of that. Phoenix are really starting to understand their boat. They keep out of trouble, once they got the first corss they were in control and these guys are sailing the boat well. It is certainly a good boat. They are just one point ahead of us, and two points off the lead and so potentially any one of the three of us could win.
Adrian Stead (GBR) Rán Racing (SWE)

But for their solid, consistent endeavours today, the Quantum Racing team have got themselves into the box seats for the last day. Up to three races are scheduled, with a first sequence billed for 1100hrs local time. 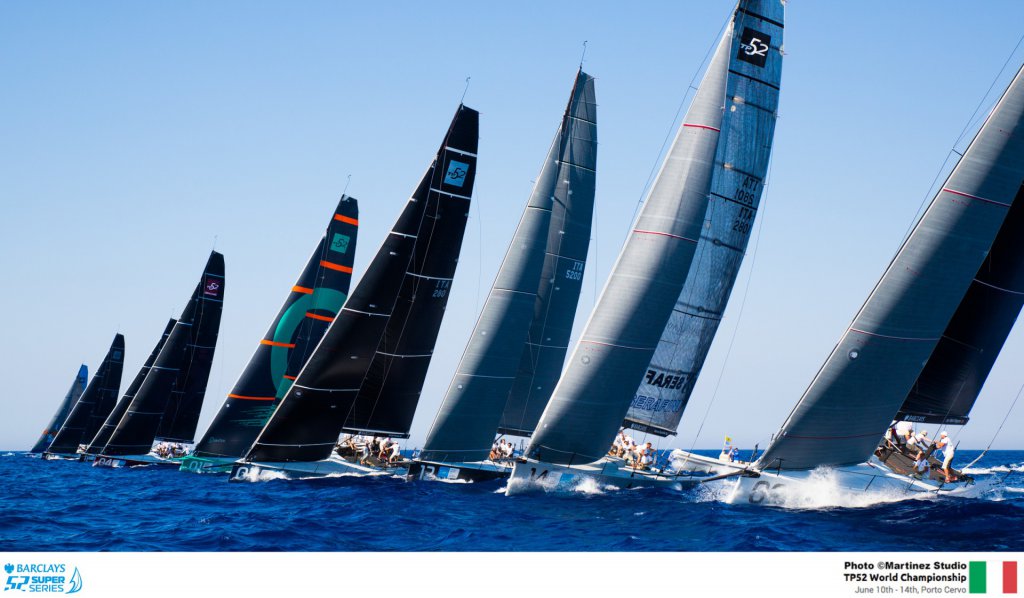