Quantum Racing may have won the premier class at the 34th Copa del Rey MAPFRE, TP52s for the third time in a row when they won the final race but tactician Terry Hutchinson considers today’s victory in the fourth regatta of the 52 SUPER SERIES their hardest won and by far their most satisfying.

Victory in the Mediterranean’s showcase regatta was a real family affair this time. Son Dalton DeVos steered the first two days of the regatta before father Doug DeVos took over for the final days.

That was by far the hardest Copa del Rey that we have won.
Terry Hutchinson, tactician, Quantum Racing

grinned Hutchinson on the dock at the Real Club Nautica de Palma, wiping the sweat from his forehead,

As much as the DeVos family have given us over the eight years, what an awesome, awesome day for Quantum Racing. To do it with our inspirational leader Doug and his son Dalton doing the first two days of the regatta…..you would say we did not do it the easy way. And yet it is by far the most rewarding.
Terry Hutchinson, tactician, Quantum Racing

Doug, one of the founding fathers and shareholders of the 52 SUPER SERIES, took over the helm on Thursday and made a shaky ninth and fifth, incurring a penalty on the first race, but came back strong thereafter winning today’s on race showdown when all the pressure was on, to seal the regatta title three points clear of Azzurra.

Quantum Racing’s first regatta win of the 2015 season was clinched by a 5,2,1,1 sequence. Indeed after their nine points aberration the 2014 52 SUPER SERIES champions amassed only nine points over the last four races.

Four boats were in the frame for the Copa del Rey title, Azzurra went afloat with a one point lead ahead of Quantum Racing and Harm Müller-Spreer’s Platoon, with Vladimir Liubomirov’s Bronenosec just one more point behind.

A delay preceded the sea breeze build. And when it came in it was shifty and fitful. A first start was annulled when a 35 degree shift skewed the start line.

But when the showdown race did get away, the 6-9kts breeze as far right as it has been all week, at 235 degrees, it was Quantum Racing who executed perfectly. They worked the right side of the course, avoiding the initial light patch to the right of the committee boat and stayed patient to earn the winning dividend, leading all the way around the course. Azzurra rounded the top mark in sixth after choosing the pin end, left side option. They then dropped two places on the run and recovered to fifth. The world champions finish runners up to Quantum Racing with Platoon finishing on the third step overeall, the German flagged team’s second podium in succession.

Once again one of the hallmarks of the Quantum Racing team was their ability to bounce back after a bad day.
Correspondingly Platoon had a day of two wins during the week but then finished 4,8,10. Azzurra may rue their wrong choice today but they leave Palma having extended their lead on the season long 52 SUPER SERIES championship by another point, heading to Cascais in September with 35 points of a margin. Tactician Vasco Vascotto remarked:

It is also true that we started the event with a lead of 34 points on the circuit standings and we finish it with 35 so if we are crying today to finish second and have gained another point in the overall standings, I think our life would be nightmare.
Vasco Vascotto, tactician, Azzurra 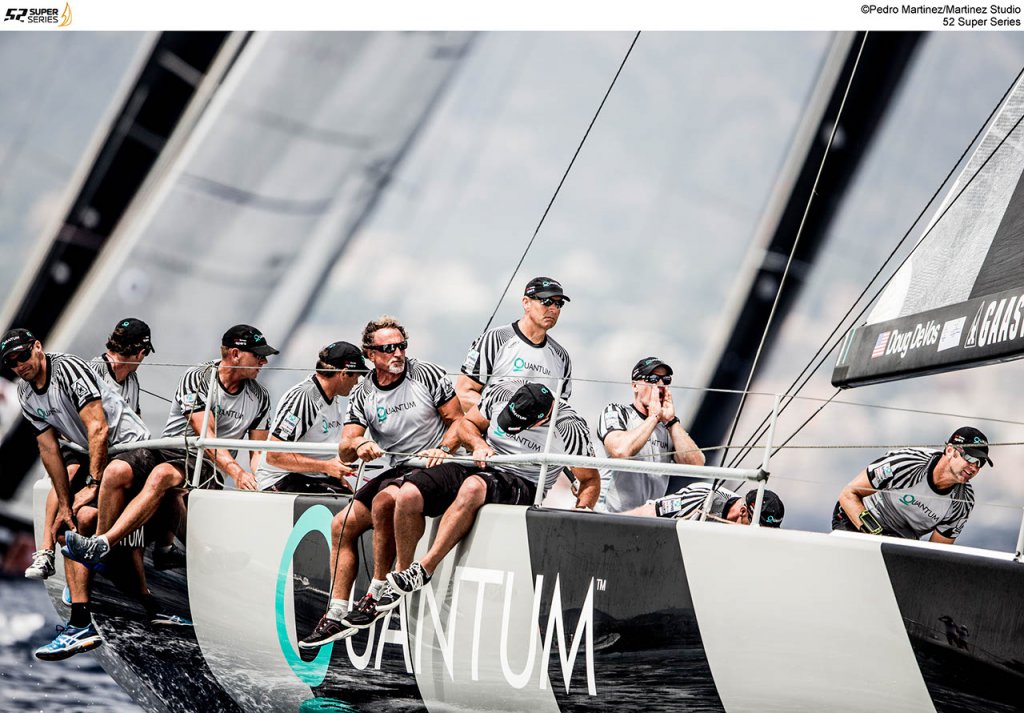 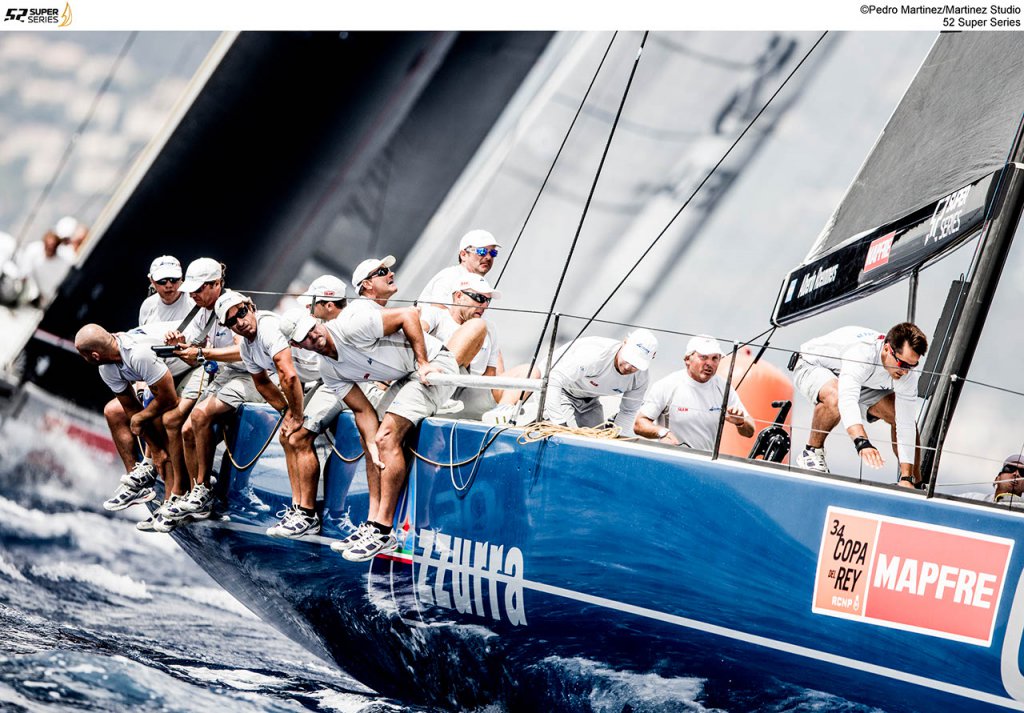 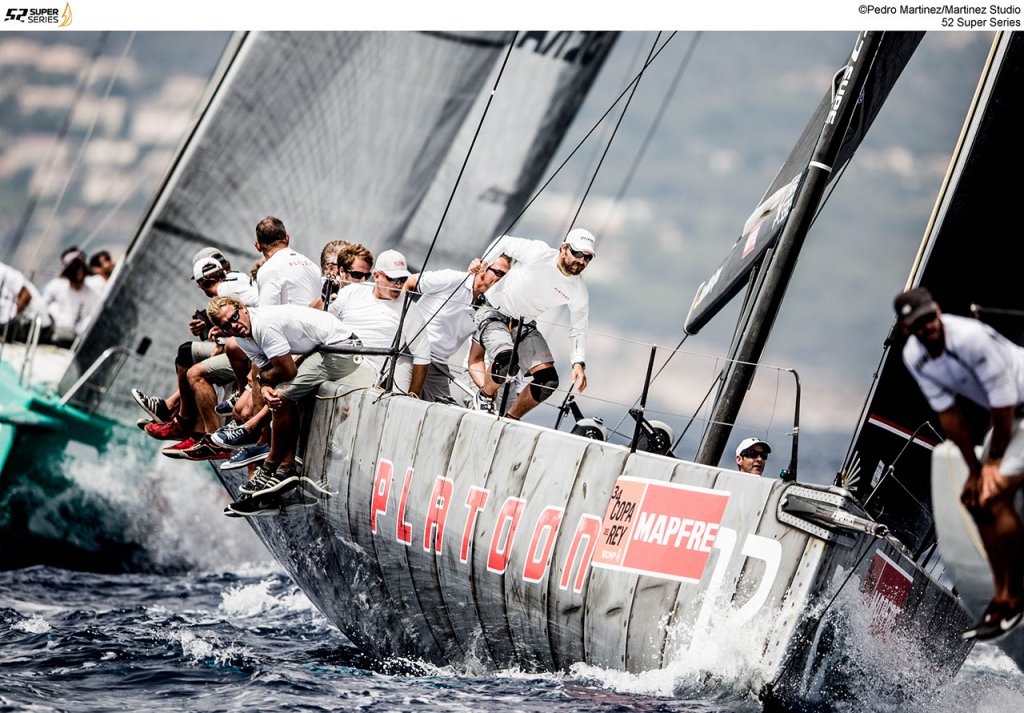 Terry Hutchinson, USA, tactician Quantum Racing USA: “That was by far the hardest Copa del Rey that we have won. It is a rewarding day and a rewarding win. I think the guys were a bit down after the day we went 6,9. The first thing I said this morning when I got on the boat was I didn’t want the penalty which we incurred to be the deciding factor in our regatta. And I think probably one of the things which helped us the most was the fact that it became a one race day and there were four boats which could win the regatta. At that point we just had to execute our plan and trust that in the process of racing the boat well that we would be right.  And we were.
Ado was confident in the right had side. We had two definitive moments in the race. The first one was lane conviction that the right was going to be favoured as the breeze was oscillating back and forth, that we extend for a minute on starboard and we always want to be the first boat going right. And Ado just encouraged patience. Once got the thumbs up from Ado that he was happy, we tacked an off we went . That was it. It was a matter of executing the manouvres and sailing smart.  As much as the DeVos family have given us over the eight years, what an awesome, awesome day for Quantum Racing. To do it with our imspirational leader Doug and his son Dalton doing the first two days of the regatta, you would say we did not do it the easy way. And yet it is by far the most rewarding.”

Harm Müller-Spreer GER Platoon: “Their choice was the right side of the course, ours was the left and theirs worked out. Today was tricky. The first third of the upwind looked good for us, we could see no one underneath us. But then slowly the right side gained. And from then we just had to defend our third place. Azzurra came close they were going forwards and backwards and we had to keep Bronenosec behind us.”

Vasco Vascotto ITA tactician Azzurra: “Obviously it was just one race and unfortunately their four boats and somebody would win from the right, somebody would win from the left. We wanted to started on the pin, that is my favourite call but it did not play out this time. It is also true that we started the event with a lead of 34 points on the circuit standings and we finish it with 35 so if we are crying today to finish second and have gained another point in the overall standings, I think our life would be nightmare.”

Guillermo Parada ARG skipper-helm Azzurra:  “It is a little bit disappointing to lose the lead on the final day after leading for the week. But thew objective of the week is to consolidate our lead on the circuit and we have done that. We did our best to win the Copa del Rey. And today some days you win some days you lose. We went into the final day of Porto Cervo trailing Quantum Racing by two points and came out winners by three. This time we went to the water leading by one and came back trailing by three. That is the way life is. You make your choices and you live with them. The good thing is we are making our own decisions and in control of our own destiny.”