(Tuesday 18th June, Puerto Sherry) – The Bay of Cadiz served up a challenging light, hard-to-read seabreeze for the first day of the Puerto Sherry 52 SUPER SERIES Royal Cup, but Ergin Imre’s Provezza team proved to be the most adept at deciphering a race arena, which is entirely new to the circuit and lead overall after a first and fourth place.

In fact, the left side of the course and the pin end of the start line offered an early advantage in both races. With Hamish Pepper calling tactics for helm John Cutler working with navigator Nacho Postigo, Provezza started nicely and were never challenged in the first race. A copy-paste strategy worked for Azzurra in the second race, which they won comfortably and these are the top two teams in the pursuit of the historic Royal Cup.

In both races the fleet split either side of the track. Provezza and the new Bronenosec led at the top mark of the first race, which was sailed in about eight knots of wind, both emerging from the favoured left.

But, proving that there was no dominant feature, and the wind was moving all the time, Andy Horton and Kelvin Harrap recognised a nice shift and change of pressure at the leeward gate. Hooking in to the right shift they got themselves up from third to second.

Azzurra, fifth in the first race dominated the second race from half way up the beat, while Alegre proved unable to add a second result. They were over the start line at the gun and had to re-cross and could only finish eighth.

It was not such a good day for some of the big guns. Defending 2018 champions Quantum Racing made an unconvincing start with a pair of seventh places, which sees them finish their first day uncharacteristically on the bottom of the standings. And Platoon, winners in Mahón, could only make sixth in the second race and lie mid-fleet, fourth.

“It was a really tough race course today. You cannot see the wind on the water, but the breeze is changing all the time at the top of the mast, going to the right and the left, but you cannot see it on the water,” explained Provezza helm Cutler. “So you are coming up and down a lot and you cannot predict it. It is an odd thing. The tactician seems to be always saying we are too fast or too slow, too high or too low. And I am saying ‘we are trying our best here.’ It has been a real trial for us all, we have been struggling. It has probably our toughest day’s sailing this year. We are going well. We keep it light. We tell a few stories along the way!”

Azzurra nearly match the strong start they made last month in Mahón, Menorca, and lie just one point behind the leaders. Skipper-helm Guillermo Parada said:

“On a day like today even if you had a decent lead, things were tight and changing quickly so you couldn’t relax for a minute. We stayed calm and we kept pushing all the way. In unstable conditions like today’s, the race course is full of opportunities, and tomorrow should be similar so we have to keep pushing all the time.” 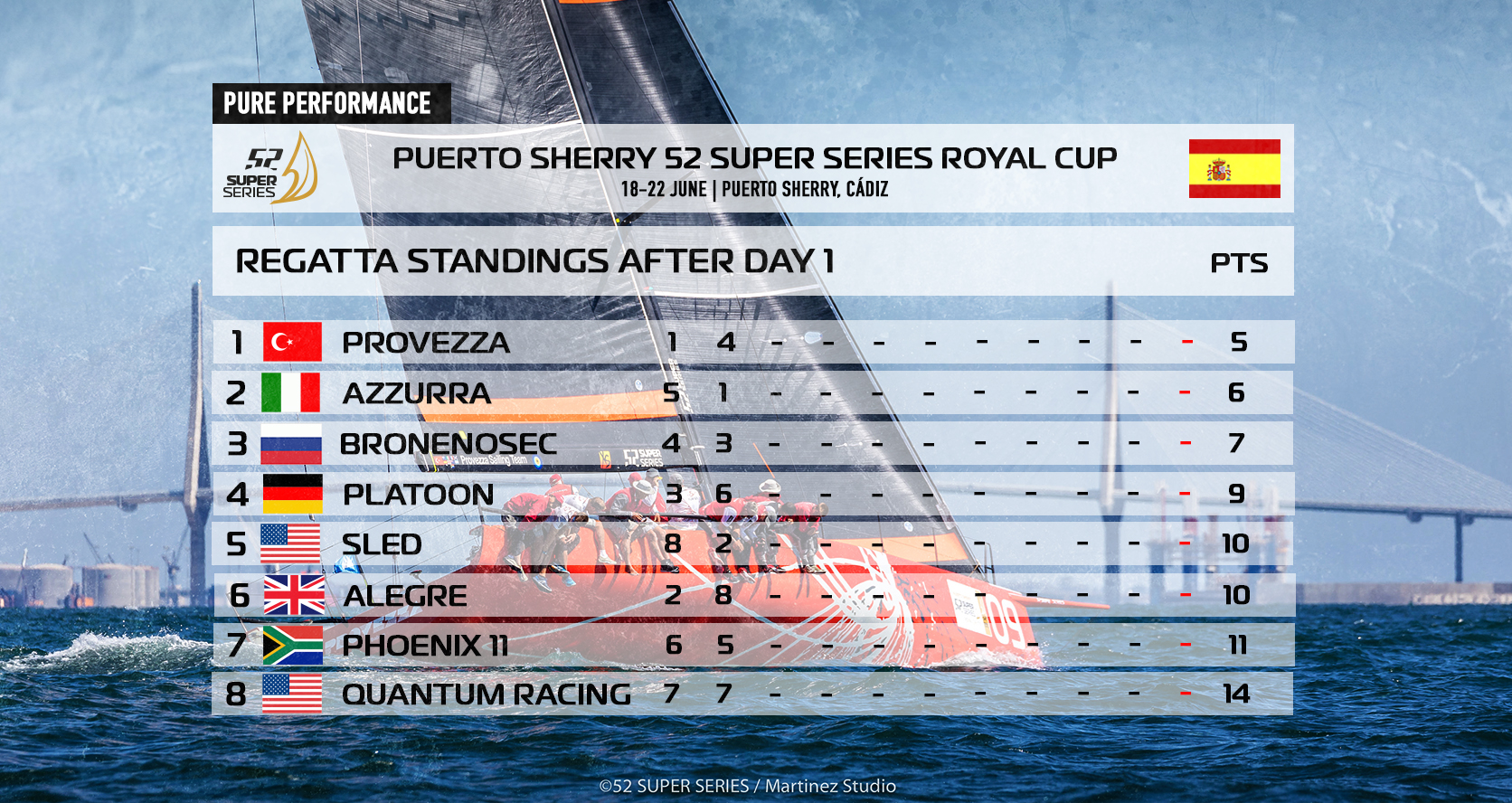