Local knowledge and a protracted spell of training late last year and before this season’s curtain raiser played its part as Phoenix completed a textbook first race that they won comfortably. Then, after a less than perfect start to the second contest, Phoenix battled from the bottom third of the fleet to deliver a valuable third place finish. Plattner’s crew lead the regatta by two points from the 2019 champions Azzurra who returned a fourth and a second, a solid debut day for new tactician Michele Paoletti.

In the south westerly breeze, which picked up to 16kts for the second start and averaged 10-13 kts for the day, conditions were not easy to read – consistency proving particularly elusive. Phoenix 11, the newer of the two Plattner family TP52s, were undoubtedly the class act delivering for the home support.

Along with veteran Plattner on the tiller, the day’s leading crew has a potent mix of local South African sailors on board such as main trimmer Paul Willcox, navigator Shane Elliott and grinder Shaun Pammenter, working with America’s Cup winner Peter Holmberg, who joined the crew this season as tactician and the hugely experienced Andy Horton also adding to the afterguard strengths.

Phoenix 11 stuck to their pre race strategy, starting smartly off the pin end of the start line to establish an early lead that allowed them to own the left, inshore side of the first upwind.

Building their margin to over 90 metres, they could keep Bronenosec and Sled in check to the finish line. Bronenosec, with double Olympic medalist Jonathan McKee calling tactics for helm Morgan Larson, finished second with winners Sled in third. Sled have Murray Jones steering. World Champions and 2019 runners up for the season Platoon were over the start line and had to re-cross and finished ninth.

While Quantum Racing had the best start to the second race they had to take a penalty on the first beat and then, as others did today, had to slow to remove kelp from their foils, resulting in an eighth place.

Andy Soriano’s Alegre, which has Ado Stead and Nic Asher as afterguard, were able to capitalise from their own solid start to lead all the way round the second course, emulating the gun to gun win of Phoenix 11.

“It is fun to sail here. It was Tina and my idea to bring everyone here and who would have thought we would have a day like this? This is perfect sailing, Table Mountain clear and fog outside, you can’t get much better?”

Of the racing he added:

“You always have to go to the left, everybody knows it. And so we had to fight for the shore. First race we had a perfect start and could squeeze out Provezza and that gave us the lead. Second race we were squeezed out and could not quite make it and so we had to fight back and we had to come from last to fourth on the beat and work hard for third. We had luck on the downwind to pass Sled for a good third. So the third was much more hard work than first!”

Main trimmer Paul Willcox reflected on the local excitement of having this regatta on their own home waters:

“I have been so excited to have the fleet come here ever since we talked about it a couple of years ago. You see the pictures and it is awesome to have it happening here. The Volvo comes here because we are this part of the world but to have these guys want to come and race here. It is just awesome.”

Of the local knowledge and the resulting game plan, Willcox revealed:

“We have spent a lot of time recently trying to better understand the bay a bit more. There is a fair amount of sailing goes on here but not at this intense level. There are a lot of smart people on these boats and so trying to outsmart them is not easy. So having a little bit of understanding of the place, a bit of local knowledge on board definitely helped.”

He paid tribute to the veteran owner-driver who sailed a great opening day:

“Hasso has been around a long time and there are not many people, especially owner-drivers, who steer a boat as fast as he does, especially when you get him on a day like today, off the blocks.

Even before we started, Hasso sat us down and said look – ‘sailing is just so much fun’. When you hear someone like Hasso who has put so much into sailing, he has brought these boats here and it a massive thing for South Africa, it is massive thing for everyone in our country to be exposed to this, but to hear him today just say, ‘sailing is just so much fun’ is just awesome. That is what you want. It is good for us, for the sport, for everyone.”

If it was a baptism of fire for Azzurra’s new tactian Michele Paoletti, the Italian 2000 Olympian did not let it show:

“It has been an unbelievable day for me. We have two really good races, one fourth and one second. It’s super to sail with this boat, and especially with this team. I think everybody has more or less the same strategy, the shore was the favourite, but the trouble is making the plan the reality. I was of course a little bit nervous this morning. It’s a different boat, I’m not an expert in the TP52, but the team keep me in my comfort zone, so in the end we had a good day.” 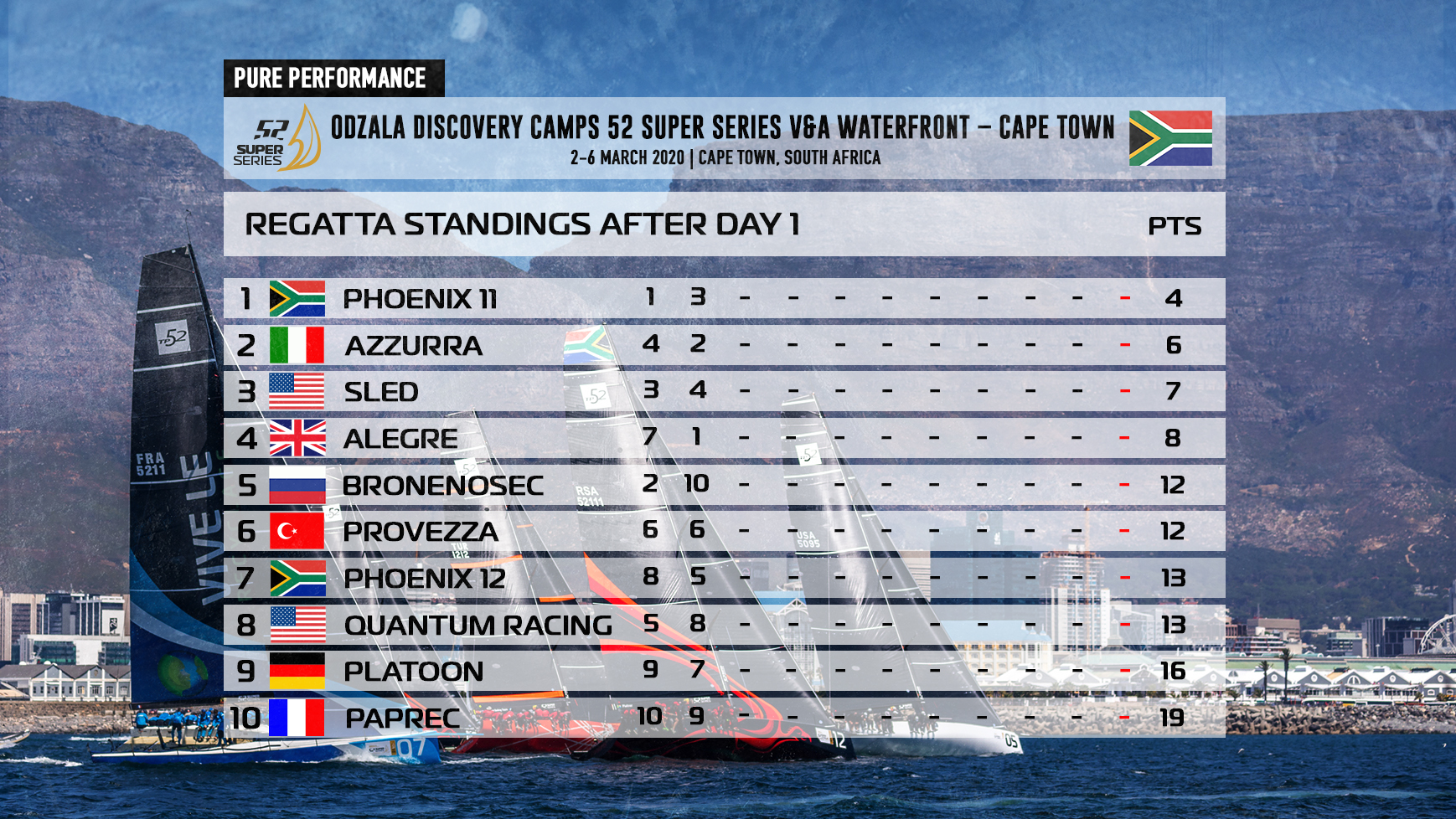