(Tuesday 7th March, Miami) – Just as they led after the first day of racing in Key West in January, Harm Müller-Spreer’s Platoon crew top the early leaderboard at the 52 SUPER SERIES Miami Royal Cup for after a dramatic first day of TP52 racing in brisk SE’ly winds and big, disorderly waves off Miami Beach.

Platoon’s victory in the second race, gained in the closing stages of a fast final run, credits them with the overall lead on tie break from the Roemmers family’s Azzurra, which posted two consistent second places.

“It was a really good start for us. We had good speed and we made some nice comebacks and in that last race on the last downwind it was down to just a few metres, so that was good. It was really great racing. But of course tomorrow is all different, new situations and new challenges, but it is good to start well.” owner-helm Müller-Spreer smiled on the dock of the Miami Beach Marina where the 52 SUPER SERIES fleet is hosted.

The 16-20kts winds and the unruly swell kicked up by the strong winds of the last few days punished small errors and placed a real premium on well-coordinated crew work. Azzurra in second place lead Quantum Racing who are one point behind in third. With Bora Gulari steering his first 52 SUPER SERIES races Quantum Racing won the first race but did not get the start they wanted in the second contest, taking fourth. 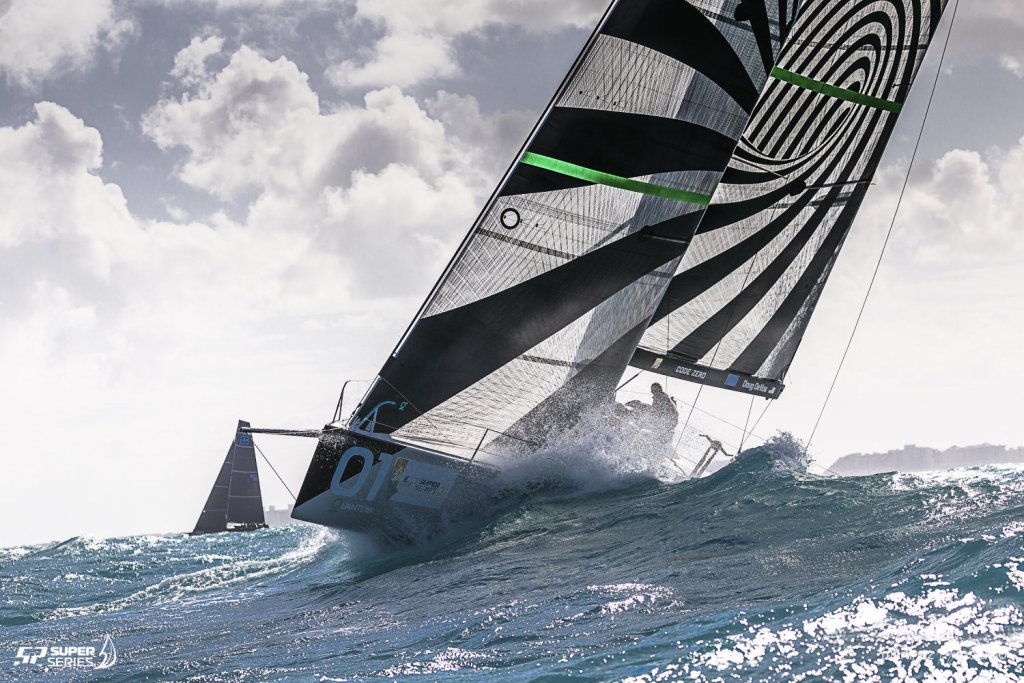 But the toughest challenge at this second regatta of the 52 SUPER SERIES is that facing the Gladiator crew. Their new boat was hit by Sled during the second beat of Race 2, only the second race for Tony Langley’s team with their latest Gladiator, suffering a significant gash to their port topsides which eliminates the boat from further competition at the regatta.

The shore team and crew now aim to re-dress and step the mast on their previous Gladiator, which they aim to bring from West Palm Beach which is some 70 miles away, aiming to be ready for racing on Thursday. Sled suffered damage to the forefoot of their bow but hope to be back in action Wednesday. 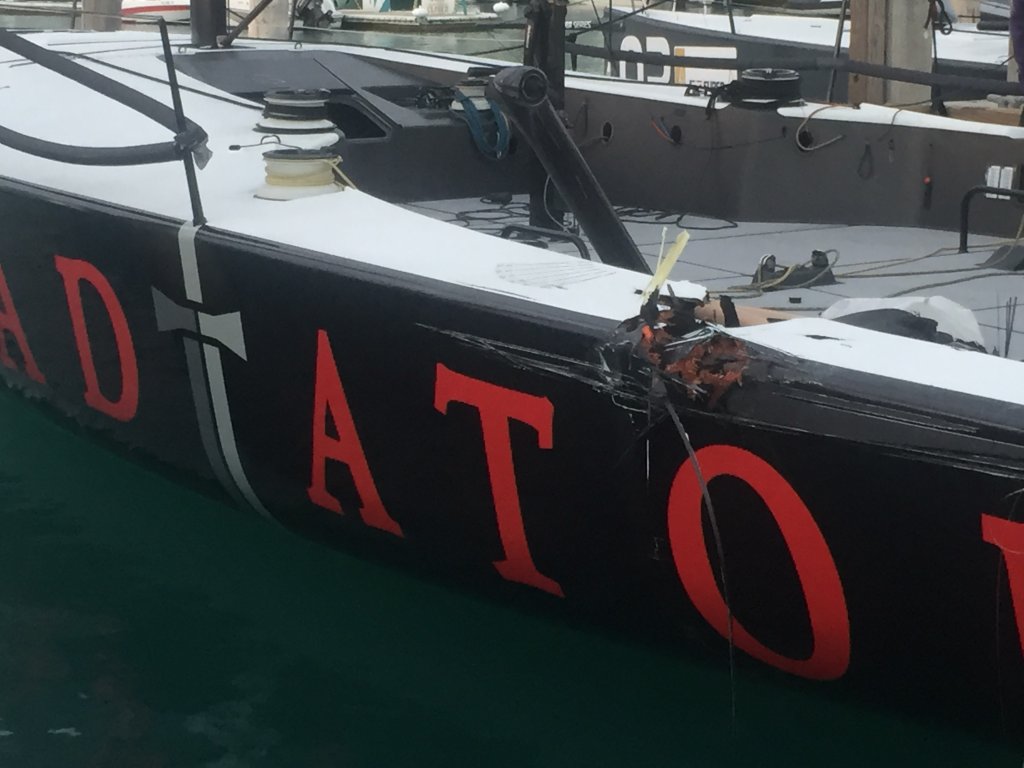 Race 1: Gulari Shows His Mettle As Quantum Racing Opens With A Win
There may have been a new hand on the helm, but Quantum Racing carried forward the momentum from their impressive 2017 52 SUPER SERIES opening win at Quantum Key West Race Week six weeks ago.

Bora Gulari, the team’s newest addition, moved from the strategist role to the helm for this event and showed that all his time sailing foiling moths and Olympic cataramans has prepared him well for driving these 52-foot thoroughbreds in some challenging conditions off Miami Beach.

Quantum Racing was among a handful of boats, including Harm Müller-Spreer’s Platoon and Tony Langley’s new Gladiator, which controlled the front row off the starting line.
Azzurra, with Guillermo Parada at the helm and Vasco Vascotto calling tactics, didn’t have quite the same freedom early in that first leg, but made the critical call to hit the left side on the top third of beat and so squeaked past Quantum Racing around the first mark.

Those two boats battled nip and tuck down the first run with Azzurra holding the lead and choosing the left side of the next leg. It was the right which paid better for Quantum Racing which was able to take over the lead when the boats converged again midway up the second beat.

Azzurra pushed Quantum Racing hard on the final run, closing to within a boat length, but the American team held on for the win. Platoon was third with Rán Racing fourth and Provezza rounding out the top five. 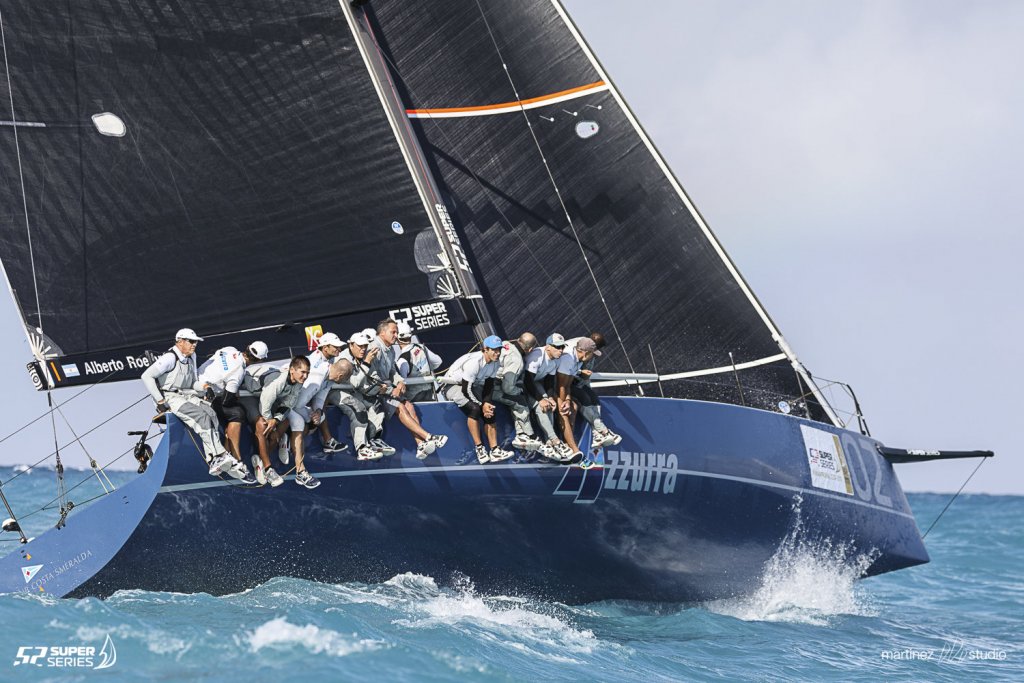 From a four way final sprint to the finish line, the outcome of the second race was in the balance until the final metres. Platoon edged out Azzurra by only four second and were only six seconds ahead of Provezza.

“[There were] some really big shifts and if you missed it you were out the back. In that second race, first beat, at times we looked like we were in last place. Sometimes we were in first place. It was quite shifty. We learned in the first race we really needed to attack the shifts and be a little more aggressive. We did that in that second race and it seemed to pay off. The waves made the crew work a challenge. You can definitely get thrown around and get your timing off because of the waves. So you play it a little conservatively at times, at least we did. The last race, it was close. On the final run we were pinned and we couldn’t jibe. Azzurra pinned us out all the way to the layline. Then they jibed away and we all of the sudden got a little header, so we kept going and extended away from them. That seemed to help us a little bit on the final jibe in. We were a minute or so separated [from Azzurra and Provezza] and they had to do an extra jibe and we were able to sail straight through the finish. It was close racing.”

“I think we still made a couple of small mistakes. They are little, stupid mistakes but in the end they are what cost us a point and the lead. But we have to be happy. In the second race we were better, but still we gybed twenty second too late and so lost the chance to win that race. And so, overall, we have to be happy with two second and a share of the lead with Platoon. But on the other we need to clean up our way of sailing and not lose these kind of points. The level is so high every point is so important. The breeze was oscillating a lot. You work to what you think is the average for the day, still I think the right was generally better, with current and other things. It was exciting and I feel we positioned the boat quite nicely.

I am getting older and so don’t remember too much about different venues. I remember little things but I try to go out each day with a clear mind. I think we have sailed a lot here with the wind and 90 and 100 degrees but not so much 120 which we saw today. I clean all past from my head and just work with what I see and I go on the water with a plan, knowing how I want to sail.”