Azzurra won the 2015 TP52 World Championship with a race to spare, finishing 14 points clear of second placed Platoon while only one point separated third from fifth, Provezza taking third step on the podium only by virtue of a tie break with both Alegre and Rán Racing

As the final points table confirms racing was incredibly close and tight for the world title of the world’s top grand prix monohull class. Azzurra conclusively proved the most consistent, keeping their scoreline in single figures throughout the five days, seventh being their worst score across the 10 race series on the Bay of Palma.

52 SUPER SERIES champions and 2014 World Champions Quantum Racing slid off the podium with an unexpected 12th in the final race, biggest victims of a big, heading windshift down the final run to the finish line.

The American flagged team seemed to have improved progressively through the regatta which was the first time in four years that skipper-helm Ed Baird had raced with tactician Adrian Stead, and the first regatta of the three 52 SUPER SERIES regattas so far that Baird has steered. But the final leg of the final race provided a cruel blow. Quantum Racing may have finished sixth but –remarkably – were only two points shy of third.

In winning his first TP52 world title Azzurra’s tactician Vasco Vascotto clocked up his 25th major world sailing championship title. Charismatic Vascotto started with his first world title in the quarter ton class with Jonathan VI in Chioggia by Venice in 1992. Among his subsequent titles are the J24, Mumm 30, Melges 32, Farr 40 and the Maxis. Typically defensive about the milestone, he paid a rich tribute to the whole Azzurra family team and to their sail designer Juan Garay who missed the regatta because of a family bereavement. Skipper Guillermo Parada dedicated the world title to Garay who had to fly home suddenly.

I am obviously proud of what I have done in the past but today it is right to focus on this team. I am happy to have somehow helped the boat this result. But this is what we are celebrating today. Not 25! Our team has worked so hard over the last two years, not just the sailing team but the shore crew, and thanks to the Roemmers family and the Yacht Club Costa Smeralda. We have been through some tough days together as a team in the last two years. We have worked hard this season to solve some of the mistakes we made these last two seasons.
We changed some things with the preparation of the boat. Me? I am still the same, a little older but as Pasquale Gondolfi said to become old is not a bad thing, it is also a good thing. I think about things more and the speed is helping. When the boat has good speed it makes the tactician a little better. Last year we were not so fast and so the tactician was not so good.
Vasco Vascotto, tactician, Azzurra

The return of the TP52 Class to Puerto Portals for the first time in seven years proved a popular one. On shore the atmosphere was second to none, the infrastructure fantastic and the sailors enjoy the compact, chic, upmarket regatta site right at the heart of the marina. And the Bay of Palma delivered ten good races on a track which was usually perfectly set on a neutral axis between the two breezes, both sides of the course paying on different occasions. That Azzurra is based out of Portals marina only added to their feelings of comfort and confidence.

Indeed Provezza won the first race of the final day, battling nicely from the right side of the course in very light 5-7kts sea breeze, pipping Alegre on the finish line after leading early on. Azzurra made a key gain at the windward mark when skipper-helm Parada threaded Azzurra through the fast approaching line up of starboard tackers to round fifth. In so doing Quantum Racing, also approaching on port, had to duck four sterns. And although Baird and the Quantum Racing team recovered, finishing behind Azzurra ensured that the emblematic team of the Yacht Club Costa Smeralda won the championship with a race to spare.

And on the final start Harm Müller-Spreer Platoon team made a facsimile of their first race start, off the pin end of the line and going left. They won the first race gun to gun and won the last race gun to gun, gaining their first podium of the season with three race wins in their scoreline, and one 12th. Harm Müller-Spreer won the Zenith watch as the top owner-driver.

Three wins – including two in one day – were the foundation of Provezza’s third but they, typical for most of the fleet, had a ten and 11 finish in their final tally.

In the end Ergin Imre’s Provezza (TUR), Andy Soriano’s Alegre (GBR) and Niklas Zennström’s Rán Racing (SWE) all finished tied up on 56 points, tie breaks declaring them third, fourth and fifth respectively. But Quantum Racing landed up with 57 and Sled 58.

This is just great racing, it is so incredibly close with any one of ten boats able to win races and regattas. This is the TP52 52 Class at its best yet.
Niklas Zennström, owner, Rán Racing and TP52 Class President

In the overall 52 SUPER SERIES standings after three regattas Azzurra stand 34 points clear of Takashi Okura’s Sled now up to second place with Quantum Racing in third. Bronenosec slipped from second to fourth. 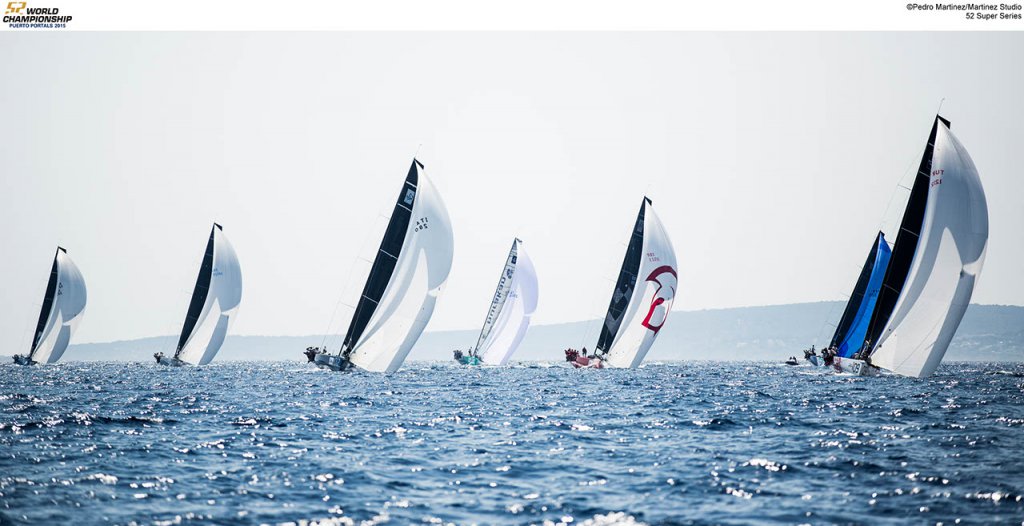 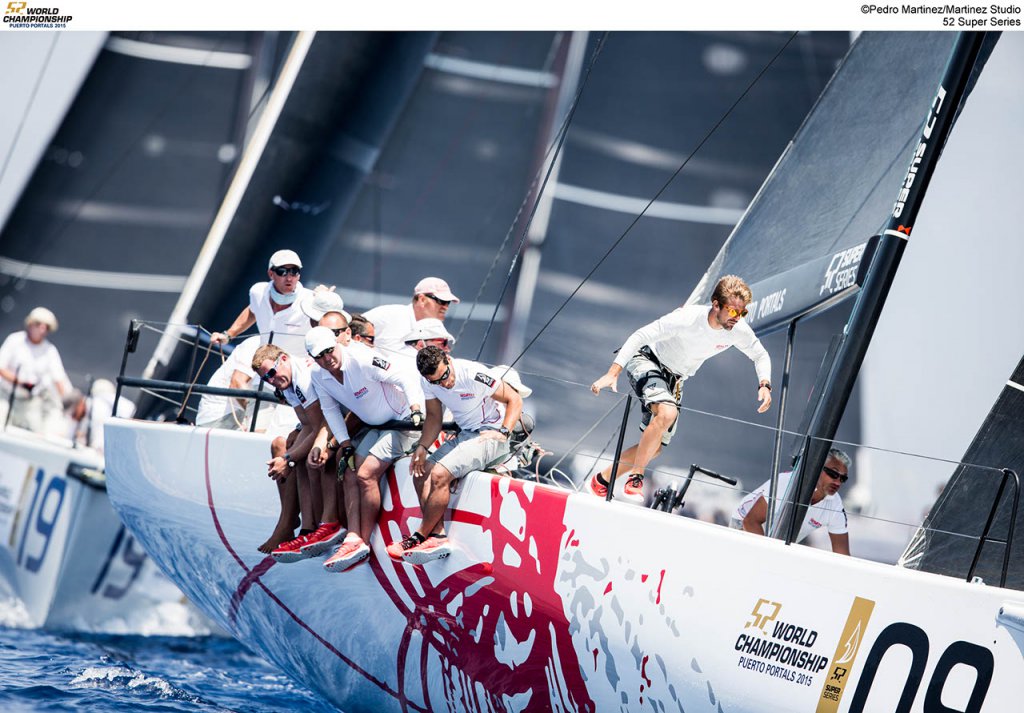 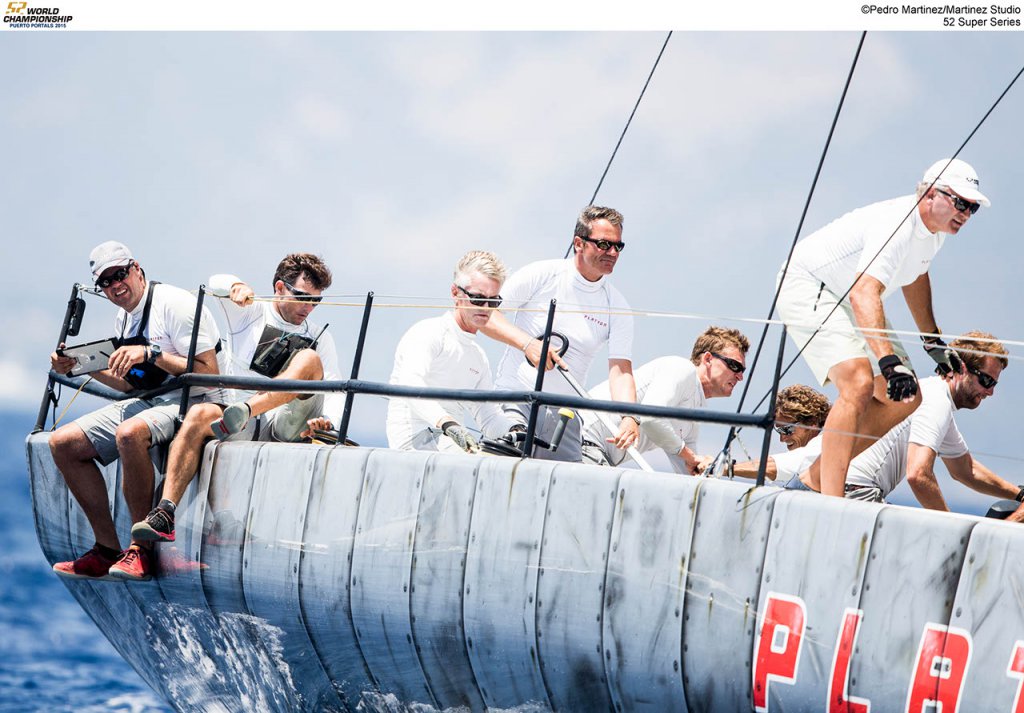 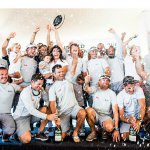 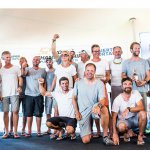 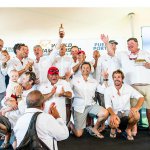 Guillermo Parada (ARG) skipper-helm Azzurra (ITA):  “ It has been a long time that we have been waiting for this moment. The last time we won a World Championship (as Matador) was here in Palma in 2009 so it was time for us to do it properly again. We were one point short two times so this time it feels really, really, sweet. We have had a wonderful week and I think as a team we have been working very good, not only the ones on the boat, the shore team, the sail makers and everyone contributes.

I cannot describe how quickly these moments pass. So we feel really, really happy and we have to make sure we enjoy this moment because there are still two more regattas for the rest  of the season that are going to be really, really tough so when you have a win like this you need to make sure you celebrate it properly.

I think we stayed consistent for the week. I haven’t checked the results yet but our worst position was seventh on the first day and I think we were the only boat with single digits [all the way through]. Slowly but surely we were making a big advances on our competitors and we were trying to make sure we had a good average for every day and having an average of better than fourth for a regatta with 12 boats is obviously going to be a winning combination and for sure that made a difference.

It was a good week in terms of confidence and the boat was going well, the crew did a fantastic job. We didn’t have any problem with any manoeuvre in the week so we had a very high standard.
I think that many times you do things how you always do and this week we had fifty good jibes and tacks and the whole crew did a fantastic job. It was the whole team working as a good package and I think that was the best combination of the fleet this week.

We love it here, the boat stays here 100 metres away so we like this place, we always feel at home here, Valencia and here are the places where we feel the most comfortable and I think it shows on the water racing.

It is a very good achievement beating second place by 14 points. This is the fourth regatta with this boat and the third we have won with this boat and I think that’s very good for the season so far. It’s a very, very, sweet moment but as  I said before it is not always like this.
We have a lot of very good sailors around us here and they will chase sometimes. So we need to make sure we stay as close as possible and make it last until the end of the season and I as I said we need to make sure we celebrate it properly today.

We have been battling against Quantum Racing for a lot of years and we know that the only way to stay ahead of them is being perfect or very close to perfect so that is the only way it may look from outside that we have dominated but it was close.

Today was a very demanding day, it was a light and steady breeze to come from the start of the third one with a black flag. The tension was very high but we were able to execute our plan to start to the right of them and control them from the right. We expected the right to be strong but we ended up going left with them, but we made sure we were always to the right of them so we were able to control them and it worked but as I said we need to keep pushing and making sure.”

Harm Müller Spreer (GER) owner-driver Platoon (GER): “That’s brilliant, unexpected a little bit but it was really tough week and a really close game all the way down to the wire but we are really happy.

We tried to win races. That was the difference for us. That worked out a few times and we didn’t look at the scoreboard, we tried to focus on the boat speed and boat handling all the time in every single race and we are concentrating on every single race not on the whole event.
Before the last race we said “okay what are we going to do?” and we tried to win the race and we did so that’s it.
Our team is tremendous, a really good team. I started with this team this Spring and I did so many things different than the last TP52 campaign. We have a few different guys on the boat and I am steering the boat myself. I kept it like this and friendship with great professionals combine into a good team.”