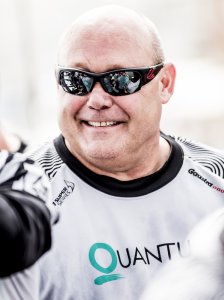 The 52 SUPER SERIES family lost a very dear friend, a long time supporter and one of the circuit’s biggest fans when Mark Koetje lost his long, tenacious battle with cancer on Saturday.

Surrounded by his loving family, ‘Kooch’ passed quietly at his home. For the last two years he fought like a true warrior, often driven by the goal of returning to Europe to share the warmth and camaraderie of the 52 SUPER SERIES that he loved, perhaps enjoying another regatta win with the Quantum Racing family, for whom he was the heart and soul.

Mark was a larger than life character who exuded good vibrations, he wore his passions on his sleeve. His commitment to the TP52 class, to the circuit, and to Quantum Racing – whose colours he wore proudly since the team’s first beginnings – was unstinting.

When ‘his’ team were winning, his megawatt smile was the widest of all, and when it wasn’t he remained upbeat, positive and always ready with a few well chosen words. He was a true sportsman, always among the first to congratulate a winning crew or to deliver a quiet message of consolation to a team that had not had a good event.

As a close friend and confidant of circuit co-founder and stakeholder Doug DeVos, Mark Koetje served on the 52 SUPER SERIES board with vision and unstinting, pragmatic enthusiasm. He shouldered his responsibilities to the circuit and the Quantum team lightly but diligently. That said there is no doubt he was happiest on the water, driving the Quantum Racing chase boat.

He was once asked “Where do you get the most satisfaction from your job, from executive level down to driving the chase boat? Where are you happiest?”

“Winning” he replied, “We like to say we’ve never lost a race from the coach boat!”

Sail on Kooch, we will miss you.