Hallmarks on the Cup?

They have done it before and will doubtless do it again before this Barclays 52 SUPER SERIES is out, but Quantum Racing today on the Bay of Palma produced a timely reminder of their champions’ hallmarks when they dug their way out from an early fifth place to rescue a valuable second around a windward-leeward course which others might have regarded as lacking in such recovery opportunities.

Quantum Racing’s coach and project manager Ed Reynolds even described the lane of breeze that they rode across to the right of the course, on the second beat of Race 7 of the Copa del Rey MAPFRE, as a private benefit as they broke away from the conventional thinking. But their move was enough to bring them back on terms with Brazil’s Phoenix at the final turning mark of the day, where they stole ahead to restore their consistent record, adding a fourth second place from the seven starts so far.

As is often the case on the leftmost course at this regatta the key battle was for the left side of the track and the ability to jump off the pin end of the start line gave a useful initial gain.

In the first race of the day Ed Baird and the Quantum Racing afterguard set the benchmark and after just a few minutes of the first windward leg, the 2013 52 SUPER SERIES champions were already 20 metres or so ahead. While Azzurra managed to get through Rán Racing to take second place, Quantum Racing’s win was never really in doubt.

Next time Zennström’s crew matched Quantum Racing’s start for timing and speed off the line, and they were also able to build a nice, comfortable lead before the windward mark. Indeed Quantum Racing were squeezed away from the preferred lane here and found themselves in the traffic. Double Olympic medallist Santi Lange read the breeze well and had Phoenix rounding the first turn just on Rán Racing’s tail. The runs proved mainly processional with few opportunities to break away and make gains. And when Phoenix and Gladiator took their duel for second to the left of the course, second time up, Quantum Racing broke to the middle right where they found this beneficial lane of breeze.

With seven of the eleven schedule races now sailed, Quantum Racing lead by six points ahead of Rán Racing who have now won three races but count a seventh and sixth in their aggregate, whilst Azzurra’s fifth in Race 7 means they are now nine points off the lead and they have Gladiator poised two points behind them. 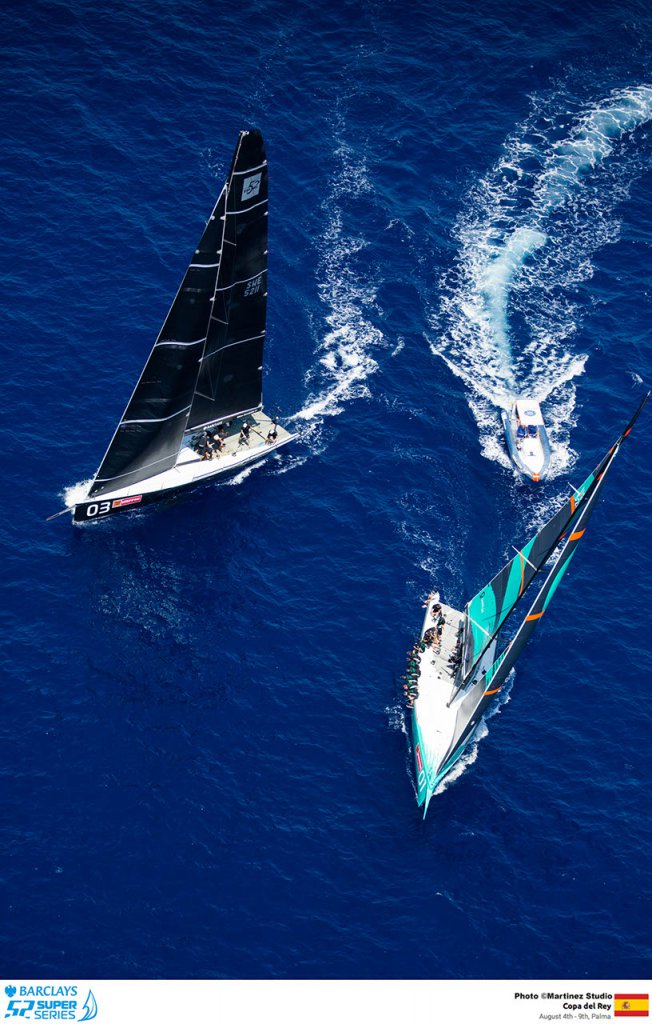 They (his crew) thought they were a little too conservative on the first beat, the second beat they just got into a special lane and it was just amazing. Every one of these regattas is like this. We came out really strong on the first day and everyone was like: ‘Quantum are going to walk away with this’…and we thought ‘no that is just not going to happen we will have our time at the back of the fleet’ and we have a couple of times here. I think we are sailing as well as we can right now, the guys keep control of everything they can and I think this will be a great event. And in saying that yesterday we got all that we wanted, all that we talked about, we got the start we wanted, but it was just wrong. One of the things in this fleet that people perhaps don’t appreciate unless they see it up close, is that we did not sail that bad and we ended up where we were. Every mistake you make is pounced upon, and that is about the calibre of the sailors out there.
Ed Reynolds (USA) Quantum Racing (USA)

A win is very important to us. We possibly let one place slip over the day but we are just about hanging on to Quantum Racing. We have had three wins at this regatta and so if we can just be a little more consistent when we are in the middle of the pack, we sort of feel that is the next step for us. It was impressive to see Quantum recover in the second race though. A fifth then would have tightened this regatta right up but they sailed brilliantly and are fast. That is the ability, to claw your way out. Overall here and for the series it is still reasonably close.
Steve Hayles GBR navigator Rán Racing (SWE)