Just when it seemed like Quantum Racing had built themselves an unstoppable winning momentum in Ibiza, the 20 mile coastal race to Tagomago Island for the ZENITH Royal Cup Marina Ibiza proved a salutary reminder that risks on these coastal passages are often the most difficult to manage.

Quantum Racing made the wrong choice off the start line and despite having the best start in the fleet, they missed out on the early advantage on the right, inshore side of the initial opening short windward leg. Azzurra and Gladiator read it better and were first and second around the first turn, with Quantum Racing rounding fifth.

But it was further down the track in a really problematic transition zone between two opposing breezes, as the fleet approached the island turn which served up the opportunities for losses, and for gains.

It was here that Eduardo de Souza Ramos’ Phoenix wriggled through the light winds areas to break into the best breeze to open a lead which proved unassailable. Try as they might there was no workable opportunity for Ed Baird and the Quantum Racing crew to get back into the podium places.

So, while Azzurra held on well to a well earned second, Quantum Racing could only make sixth leaving the crew frustrated and glum faced as they docked back in the Marina Ibiza.

Let’s put it this way, we will be glad to be back to the closed course, manageable variables of the windward-leeward track tomorrow.

Sometimes these coastal races just rise up and bite you and it was just one of those kind of days. 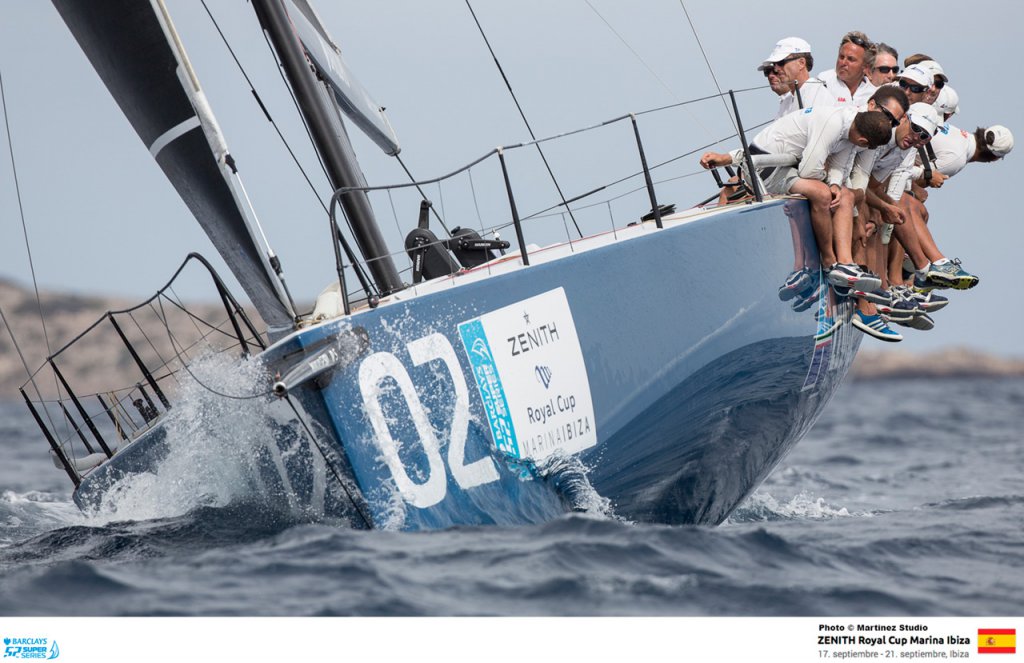 Their overall lead in the Barclays 52 SUPER SERIES is trimmed very slightly with two days of the season left, likely to be four or five more races, but the key change today was Azzurra vaulting back up to second, three points ahead of Rán Racing on the overall standings for the season.

It was Phoenix which recognised an opportunity and got themselves into a position to take advantage. They were seventh around the windward mark, gained a couple of places on the approach to the anti-clockwise turn around the high, rocky islet, but they had the advantage of seeing where the leaders were planted, trying to break into the established SW’ly breeze. Phoenix stuck close in to the shore, under the high cliffs and were able to keep their spinnaker drawing almost until they punched into the stronger breeze. And within minutes they went from struggling in one or two knots of wind, to a fulsome 12 or 13kts, fully stretched upwind.

While Gladiator lead to the island they had to settle for fourth place behind Phoenix, Azzurra and Provezza.

On the leaders table for the ZENITH Royal Cup Marina Ibiza Quantum Racing now have a margin of four points overall ahead of Azzurra with Niklas Zennström’s Rán Racing now six points behind in third.

We are very very happy to have always stayed in the top two of that race. It was very difficult, very very tricky and so we are pleased to have gained some points on Rán and on Sled and on Quantum and now we are a little closer for the last two days for Ibiza. The transition was expected but not for such a long time. At a certain point you were thinking maybe the old wind was not there any more, but it was just moving back to the west a little. The guys behind were trying options, somebody goes left, somebody goes right and you cannot cover them all. You need to take your decisions. And our guys did a fantastic job, hoisting the right sails all the time and staying relaxed. It was a good race. More than that we are happy because we worked hard to be able to improve our performance here. I think through the last three or four days we have been sailing faster and we are proud of that.
Vasco Vascotto (ITA) tactician Azzurra (ITA)

It was a tough, tough day for us. We are much more comfortable closed course racing because we are better able to control what is happening on the race course and that is the strength of our team. These races sometimes you are the beneficiary and sometimes you are not. I don’t think you will see a lot of crying on our boat though. These guys are disappointed but they realise that when you do these coastal races that kind of thing can happen. It did not work out for them.
Ed Reynolds (USA) project director Quantum Racing (USA)

We were very lucky. On the way back we had the boat nearest the coast and just took the wind before the other boats and we passed from fourth to first. Then it was just a question of covering Azzurra and Gladiator to the finish. But it is super to win, a great feeling for this team. With the level of the fleet that we have here, to win a race is like winning a world championship. It is very, very nice. We like Ibiza very much.
Eduardo de Souza Ramos (BRA) owner-driver Phoenix (BRA)