A successful, productive training week on the waters off Valencia’s Malvarrosa beach saw five TP52s preparing for the upcoming 2016 52 SUPER SERIES raise their game to the point that racing during the five regatta series is fully expected to be closer than ever.

Three days of speed tuning were followed by informal racing on Friday, Saturday and Sunday – facilitated by the Saint Petersburg Yacht Club, home club of Bronenosec. Although honours were reported to be quite even across the races – no formal results are published – consensus agrees on two clear points. 52 SUPER SERIES champions Azzurra were still consistently the best team there, and the Vrolijk designs – which have been modified through the winter – are expected to be closer in upwind performance to the Botin Partners designs such as Azzurra and Quantum Racing. 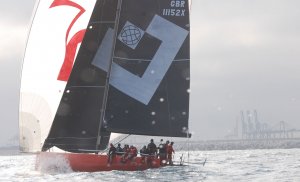 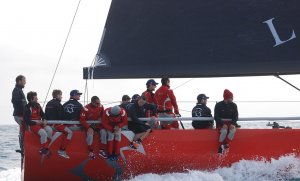 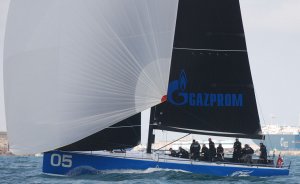 Between the Friday and Sunday eight races were sailed in a range of conditions and Azzurra – which sailed with her full race crew – is reported to have won more races. By all accounts Tony Langley’s Gladiator, a Vrolijk design which had America’s Cup winner Ed Baird on board to provide some outside input for this week only, has made visible speed gains and the speed tests reports of various competitors suggest the two quickest boats were Azzurra and Gladiator.

In their quest to reduce a small deficit in upwind vmg or possibly better said to create a wider range of apparent wind angles in which to match the Botin Partners designs upwind, some of the Vrolijk boats are reported to have new or modified keel fins, moved their rudders slightly forward and some have reduced blade area to reduce some of the drag which the modifications added. Ergin Imre’s Provezza has a new Southern Spars rig which was set up during the training week. Quite a few of the rigs have been beefed up in the lower part during the winter, replacing lead trim ballast for laminate and so adjusting bending stiffness to the ever increasing loads that the trimmers like to induce.

In general now we can live in skinnier (tighter, higher) lanes upwind than we could before and I don’t think we have given away much downwind.
Confirmed Simon Fry, trimmer on the Vrolik designed Provezza,

It was good to get the chance to go out this early in the season and knock lumps out of each other, to have some hard racing under our belts as that is what will make the difference when the season starts in May. It was good to be up against Azzurra, which maybe is not really that much faster than us all but is just better at fleet management and going in the right direction. But for sure this season it is going to be much closer through the fleet.
Fry concludes.

It has to be said that all of the boats improved and that every day is getting harder to get a speed edge on anyone , so we anticipate a higher level of competition for this season. Now it`s time to download all the obtained data and make decisions about the equipment and settings to be used during the 52 SUPER SERIES. Next step is Palma Vela , where we expect a minimum of 8 boats , and will be more into racing mode rather than testing , so it will be interesting to see what has the rest of the fleet been doing. We feel we are in a good position and we are making sure we arrive there in the best possible shape.We are all looking forward to it.
Guillermo Parada, skipper helm, Azzurra

Gaastra Palma Vela, the Palma regatta which has become a vital tune up event prior to the 52 SUPER SERIES now has nine TP52 entered, the most competitive fleet ever assembled pre-season.