As the Bay of Palma delivered typically glamorous sea breeze conditions to open the 33rd Copa del Rey, the third regatta of the Barclays 52 SUPER SERIES, Doug DeVos’ Quantum Racing proved best able to maintain the highest level of consistency on a race area which places such a high premium on winning and using the key left flank of the upwind track.

With Ed Baird driving two crisp, clean starts Quantum Racing scored a second and a first to lead the seven boat fleet by five points. Reflecting the real mixed fortunes which seemed to prevail otherwise, Niklas Zennström’s Rán Racing won the first race but then dropped to a seventh in the second windward-leeward but still hold second place overall on eight points, sharing the same points aggregate as Azzurra who scored 3,5 for the day.

In the fundamental battle for the preferred left side of the first upwind, it goes almost without saying that the starts were absolutely key and Quantum Racing’s were good enough both times that they were able to twice lead around the first windward turns.

Rán Racing were able to slide down inside them on the first run to earn the prime choice of leeward gate mark. From there Zennström’s crew were able to extend to win comfortably from Quantum Racing and Azzurra.

Ever the perfectionist Quantum Racing’s Terry Hutchinson may have come ashore to the Real Club Nautica de Palma mildly perturbed, feeling that he had rather let Rán Racing off the hook in the first race, but he was nonetheless pleased to have come away with a pair of good results to start Quantum Racing’s defence of the Copa del Rey title.

I am kicking myself a little bit for the first race. We had an opportunity about three minutes into the leg to take a step up to Rán Racing and pound them and we didn’t. The leg played out with a little right shift on the way out to the port tack lay line and it played a little havoc for us. And Rán were just in that 13kts windspeed where they go quite nicely downwind and I got mad at myself for not being more proactive down that first run, getting Ed down to put the squash on them, Michele was harder than I was in enforcing, but we bounced back and had a good second race.

But, you know, it is a long regatta. Nine races to go from here.
Terry Hutchinson, tactician, Quantum Racing 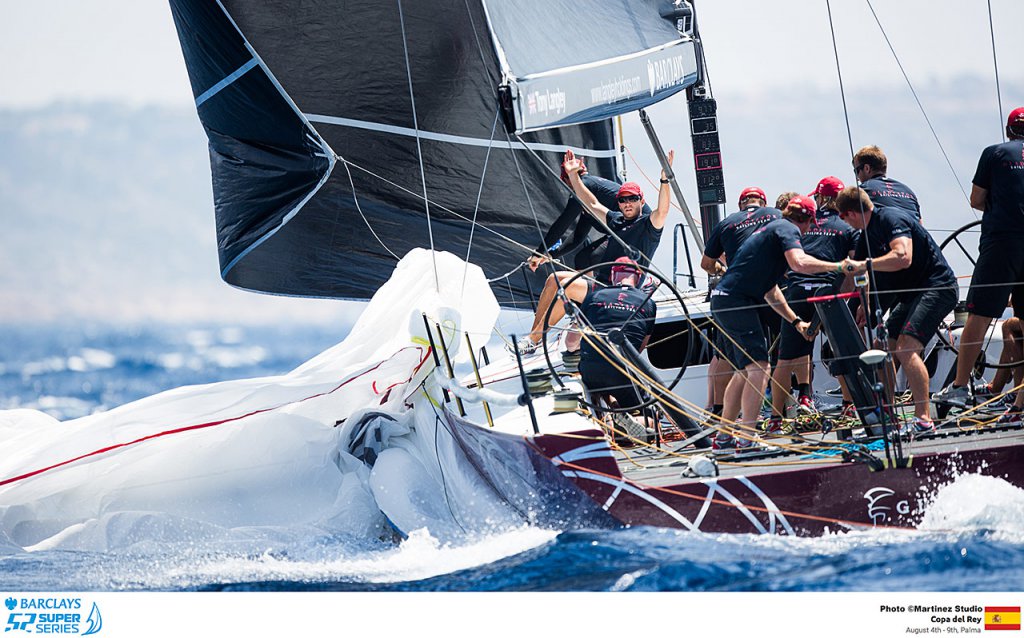 Tony Langley’s Gladiator messed up their kite drop at the leeward gate and paid a heavy price when they trawled it behind them, but to their credit they were straight back on to the horse for the second race. They absolutely nailed the start on the pin end of the line. They had to accede to Quantum Racing’s slight speed edge but held on for a good second place across the Race 2 finish line. In contrast this time it was Rán Racing which was not so good off the start line and that put the Race 1 winners on the back foot round the first circuit. They had worked up to fourth or fifth whenthey had to take a penalty for infringing Paprec which dropped them back to a seventh placed finish.

Quantum Racing lead the regatta by five points but there are only two points separating second from seventh, showing just how close racing is in the regatta’s premier class.

I think the word starting is the most appropriate today because Ed, Michele and Greg (Baird, helm, Ivaldi navigator and Gendell bowman) executed some really, really nice starts. I am kicking myself a little bit for the first race. We had an opportunity about three minutes into the leg to take a step up to Rán Racing and pound them and we didn’t. The leg played out with a little right shift on the way out to the port tack lay line and it played a little havoc for us. And Rán were just in that 13kts windspeed where they go quite nicely downwind and I got mad at myself for not being more proactive down that first run, getting Ed down to put the squash on them, Michele was harder than I was in enforcing, but we bounced back and had a good second race. But, you know, it is a long regatta. Nine races to go from here. As one sided as the track is out there, there are still a lot of subtleties. Hats off to Rán Racing for winning the first race. But then a good bounce back from Quantum in the second race. But Tony Langley and the boys on Gladiator sailed a really good second race. They did really nice work getting the jump on us off the start line, but we slowly got the boat up to speed and eked our way out from underneath them. And they put their bow down and reached through us but that shows how strong the left. All in all a good day, a good start, wouldn’t trade it. And some things we have to work on as well.
Terry Hutchinson USA tactician Quantum Racing (USA)

We had a lovely first race, knowing the left was quite strong. We were fighting for the pin with Quantum Racing. We knew we could not get it and managed to set up to windward of them and basically lead them round and then go round on their transom with Azzurra right behind us. We sailed a very good run and managed to sail deep and get inside Quantum to get the best mark at the gate. We felt the left was strong, the gate was square. I think we managed to work the depth from their leeward quarter wave and get down inside them which meant they could get their gybe in without infringing us. Once we got the right mark we felt we were in a reasonably strong position. We took the first chance to get up and just tick them off and then from there it was comfortable. The second race we did get ourselves back into it on the second run in fourth or fifth, but the Paprec guys behind caught some breeze and sailed right up to us. When we gybed we infringed them. We had to go then or be seventh. We did not make it stick. It was disappointing not to get a fourth or fifth. It was a brilliant first race, but the second race – well, it is tight – we all know the race course, everyone wants the left and it is how much you want to be in there, pitching for a start that will win you the race. And yet you get it slightly wrong and you are sixth or seventh off the line.
From here it is more of the same. We keep learning. We know we are going well upwind and downwind. And our starting philosophy if we can get a good start being away from the others then we do that, but we want to be in there fighting for what start will potentially win the race. That is our philosophy and we are just going to keep working at it.
Adrian Stead (GBR) tactician Rán Racing (SWE)

It was a pretty positive day for us. Palma is tricky because everyone knows to go left. But often a lot of ways to win the left is from the right if you have a speed to live in the lane. It was a classic Palma day with the wind at 210 on the start line and 180 at the windward mark. We all know the left shift is there. It is just a question of setting up off the line and being able to live on starboard off the line long enough to get a taste of it. We had a terrible start in the first race. We had an easy foul with Gladiator but I could not get the tape off the protest flag on time, so they got away. But in the second race we were able to live in the lane to the right first beat second race and that set us up enough to get our elbows out on the faster boats. So a 5,4 for the day…we’ll take it.
Tony Rey (USA) tactician Provezza (TUR)