(Friday 19th May, Scarlino) – The most consistent TP52 crew so far this season, Harm Müller-Spreer’s Platoon team have given themselves a fighting chance of lifting the Rolex TP52 World Championship title for the first time after returning a strong pair of scores on the penultimate day of competition.

After scoring no worse than third from the first three racing days, Platoon’s nine points aggregate may represent their weakest day so far, but their hallmark ability to keep things simple, work hard, concentrate on achieving clear lanes of breeze and so always make steady gains through each race again held true. 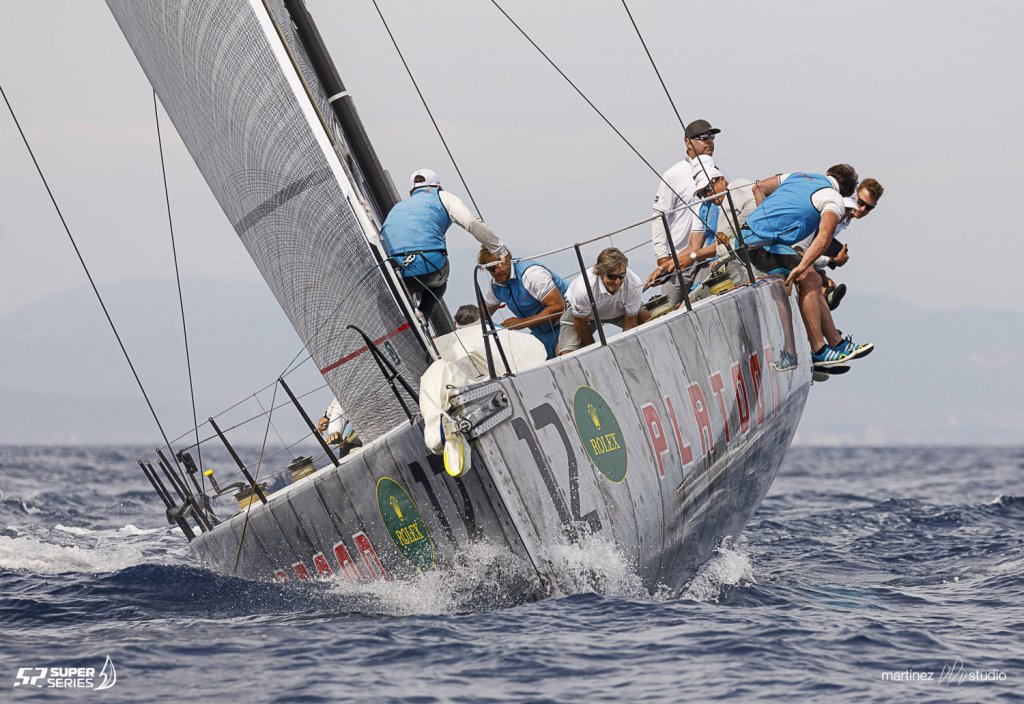 Platoon lies two points clear of Quantum Racing at the top of the standings.

The German-flagged team lead the current 2016 world champions Quantum Racing by two points, ensuring a thrilling title showdown between the two Quantum Sails powered crews to be decided over two final races, Saturday, when breezes are forecast to be the strongest of the week, 17-21kts according to this evening’s forecasts. 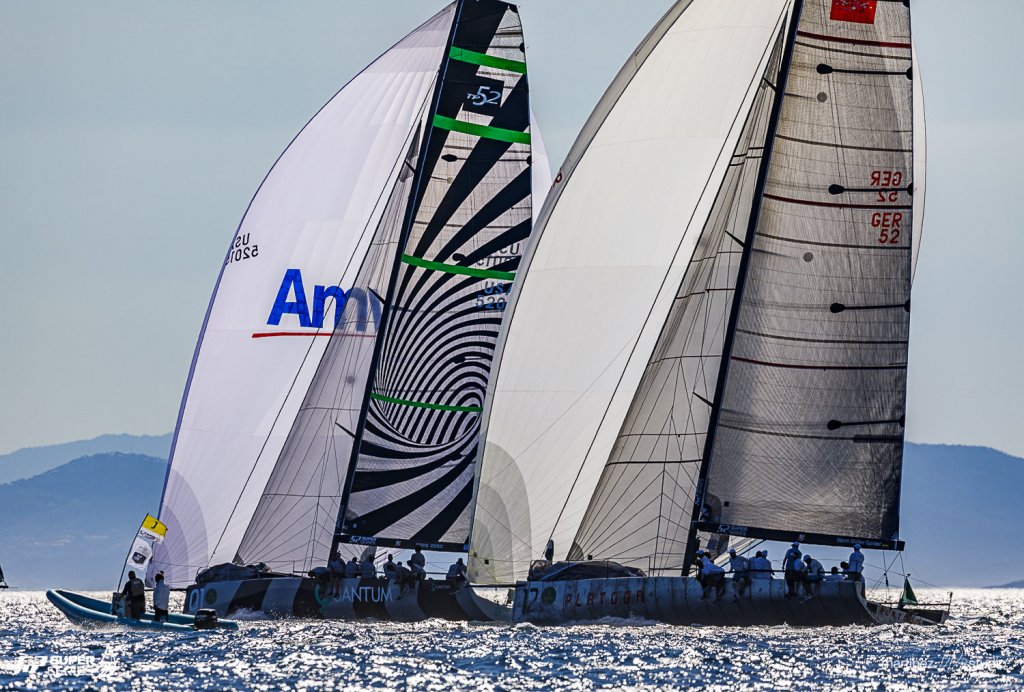 The thrilling regatta finale will be decided over two races on Saturday.

In the first race of the day, Race 6 of the championship, Platoon recovered from tenth to sixth, one place ahead of nearest rivals Quantum Racing. Similarly in the second contest – sailed in a modest S’ly breeze – John Kostecki and Jordi Calafat engineered another ascent through from a seemingly difficult and slightly distant fifth at the first windward turn to finish third, chasing their second placed title rivals, Quantum Racing, across the finish line.

“John is doing a great job in how he positions us making sure we can sail in clear air. He has a great feel for it, but we have a great team that is really working hard. For example, we actually only have quite a small shore team – by the standards of other, bigger teams – but we work hard,” explains Spanish round the world ace, Pepe Ribes, boat captain, crew boss and pitman.

“We will not change anything for the last day. The forecast for us is great, just what we would like. We would love to win the world title, of course, why not? But our goal is to win the season.”

“We haven’t had great starts but we’ve been able to sail through the fleet quite nicely, which is always a good feeling. Tomorrow, it’s going to be all on. We’re only two points ahead which is basically nothing, so it’s going to be a good battle!”

Just as within an equivalent F1 team, inside the Quantum Sails race teams camps, there will be no change in the free and open sharing of information between the different crews, which share an overall coach and performance analyst in James Lyne. It will be business as usual, and may the best team win.

Five time holders of the world title and current 52 SUPER SERIES champions, Quantum Racing – here under tactician Terry Hutchinson – have the hard wired winning mentality. Harm Müller-Spreer’s team are the form team of the moment. They wavered in Miami when they led into the last day in March, but conditions were lighter than are expected for the super Saturday showdown.

Andy Soriano’s Alegre is on course for a second consecutive podium in Scarlino after their second last year. A new mast, fitted since Miami, has added a click of extra power and Andy Horton has proven a steadying, motivating influence as tactician. But their cushion over Azzurra is – like that between the top two protagonists – only two points. 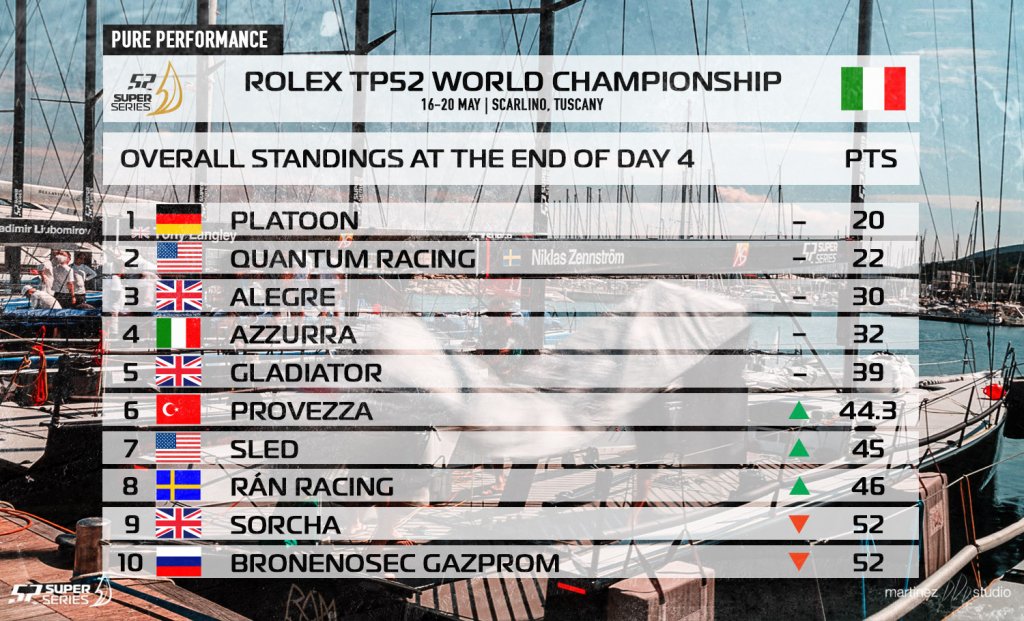 “The forecast for tomorrow is around 17 knots as it stands now, which we’re okay with. We don’t really like the chop in light air, so anything under 10 knots and choppy we really seem to struggle, so the windier the merrier as far as we’re concerned.”

“The starts are so competitive, you’re always weighing up the risk of going for the gun start, or going slightly conservative, maybe you won’t be first but you’ll be okay. Every team is weighing up that same option and the starts are just super competitive everyone’s doing a really good job. We didn’t get off the start line for the second race and you’re on the back foot. You’re waiting for other boats to make mistakes for you to catch them, and they didn’t. It’s the teams who are doing the complete package a little bit better, who’ve been getting off the line and getting clear air the first half of the first beat who are the consistent ones!”

“It’s less about how tricky the venue is, and a lot more about how good the fleet is. Anyone can win a race here, and we’ve seen a lot of teams lead at the weather mark. I’m just excited we’ve been able to pull a couple [of wins] out. Especially that one, where we were able to get around the weather mark with a close lead and then defend it for the rest of the race! So it wasn’t that tricky of a day, it was just about the quality of the fleet. The boat feels good. We’re still learning a lot about it. But when we do the right things, the boat treats us well. That’s certainly a feature of this platform.”

“We’re just continuing to sail the best races that we can, and see how things play out. Tomorrow, hopefully we’ll do our best and kick some butt.”

Tell us a bit about your helming style.

“You’ve got to be able to keep yourself focussed on a couple of little inputs. Fight the urge to look around, just ask every now and then what’s happening around you but I feel like if I just glance away from the tiller… my standard speed loop is medium jib telltales, true wind angle, target boat speed. Lock in on the heel, and get a little feedback from the rudder and it’s just kind of that same loop over and over and over and over, and ask how we’re going and if that’s alright, and get some feedback on that and that’s what it’s like to be the helmsman, at least that’s what I’m trying to be like.”

How’s the dynamic with you and Terry?

“It’s really good, I really feel like I’m getting to learn so much and he’s going out of his way to try to teach me, which is really nice. I kind of taught myself how to sail and I’ve now had quite a few mentors, and this is just amazing, the learning is just incredible.

I’m definitely learning a lot on the analysis side and how to do things on a grand-prix level. It’s really helpful, just to be able to see what’s out there and hand-on, I can critique myself with the numbers, I get told if I’m not doing well, it’s all good!”

Tomorrow, are you focussed on Platoon?

“I don’t look. Until I’m told to take a peek. I really just go try to race the fleet, head down and charge. I’m trying to make the boat foil, but I haven’t been able to pull that off yet!”