(Friday 21st June, Puerto Sherry) – Bronenosec, the newest boat in the fleet steered by the youngest helmsman, goes into Saturday’s final reckoning for the Puerto Sherry 52 SUPER SERIES Royal Cup with a one point lead over the 2017 circuit champions Azzurra. Vladimir Liubomirov’s Russian-flagged team proved fast in the moderate sea breeze conditions, and, with 2016 Olympic champion Sime Fantela on the helm with Morgan Larson calling tactics, they were able to convert slender chances into crucial points gains.

The penultimate day of the second regatta of the 2019 season brought great conditions on the waters off Puerto Sherry. The sea breeze blew between 12 and 15 knots for the two races sailed. As if to underline just how high the standard is all the way through the eight-boat fleet – after Andy Soriano’s Alegre won the first race of the day, Race 7, and Tina Plattner and the team on Phoenix 11 triumphed in the second windward-leeward, Race 8 – now seven different boats have won races during the four days of racing so far.

And the results rollercoaster continued today. The very challenging breezes that are hard to read and to predict, the timing of the windshifts are compounded by the extremely even fleet. From a second row start it is nigh on impossible to gain more than a place or two.

The exception today seemed to be Bronenosec who hauled themselves right back into contention for the historic Royal Cup when they improved from fifth to third during the second half of the second race.

Those hard earned gains, scored through precision sailing, astute low risk tactics and a keen eye for a developing opportunity are all of what ensure the blue-hulled Bronenosec will enjoy a showdown against their friends and rivals on Azzurra for one of the class’s sought after pieces of silverware.

“I worked with Azzurra last year, they are really nice guys, they sail well, they are the benchmark among the teams because they have spent so many years together,” smiles Fantela. “We try to follow their lead and hopefully we have a chance to beat them this time. It’s going to be like a medal race – the usual key is to stick to your plans, be confident in it, if you see a gust from either side just go for it and be strong. I always go into regattas without expectations. I’m happy with where we are, with the work we’ve done this week so far, and its going nice, we just need to keep chipping away.”

And in the other blue corner is Azzurra who also have a current Olympic champion in a key role, 2016 gold medal winning Nacra 17 helm Santi Lange who joined Azzurra just over a year ago. He is loving the challenge of racing at this difficult venue where he finished third in the 2003 Tornado world championships, the same year Fantela – an ex Optimist World Champion – was crowned World Youth Champion for the first of three times. After winning Thursday’s second race, Azzurra followed up with a second in the first race today to lead the regatta. But the wheels suddenly came off with an all too easily gained eighth place, which relegated them to second, one point behind Bronenosec going into the last day.

“With Santi, it’s a longtime friendship. We sailed in Snipes together, then we went to the Sydney Olympics together in the Tornado, he was my first coach so I’ve known him since forever. You can understand the relationship we have, it’s easy, we can talk openly, and no one gets upset, and its quite fun.”

“You can see the positions here are so up and down. We got a second in the first race, and an eighth in the second one, and the whole fleet is like that, so it is quite open. We are really close on points, everyone is in a bunch, so we’ll see tomorrow what happens! We’re expecting a little less breeze than today so we’ll see what we get.

We are setting up the atmosphere on board; its quite different from last season. Every time you change the people on board it takes time to settle up, and we paid for that last season. this season we are generating a much more comfortable feel, more confident in ourselves, and we know we can do well if we sail well, so we’re focusing on that.”

So too it was a patchy day for Ergin Imre’s Provezza who paired a third to a sixth to lie third. Just four points off the lead, the red-hulled Vrolijk design has every chance of going one better than their second place in Menorca last month. 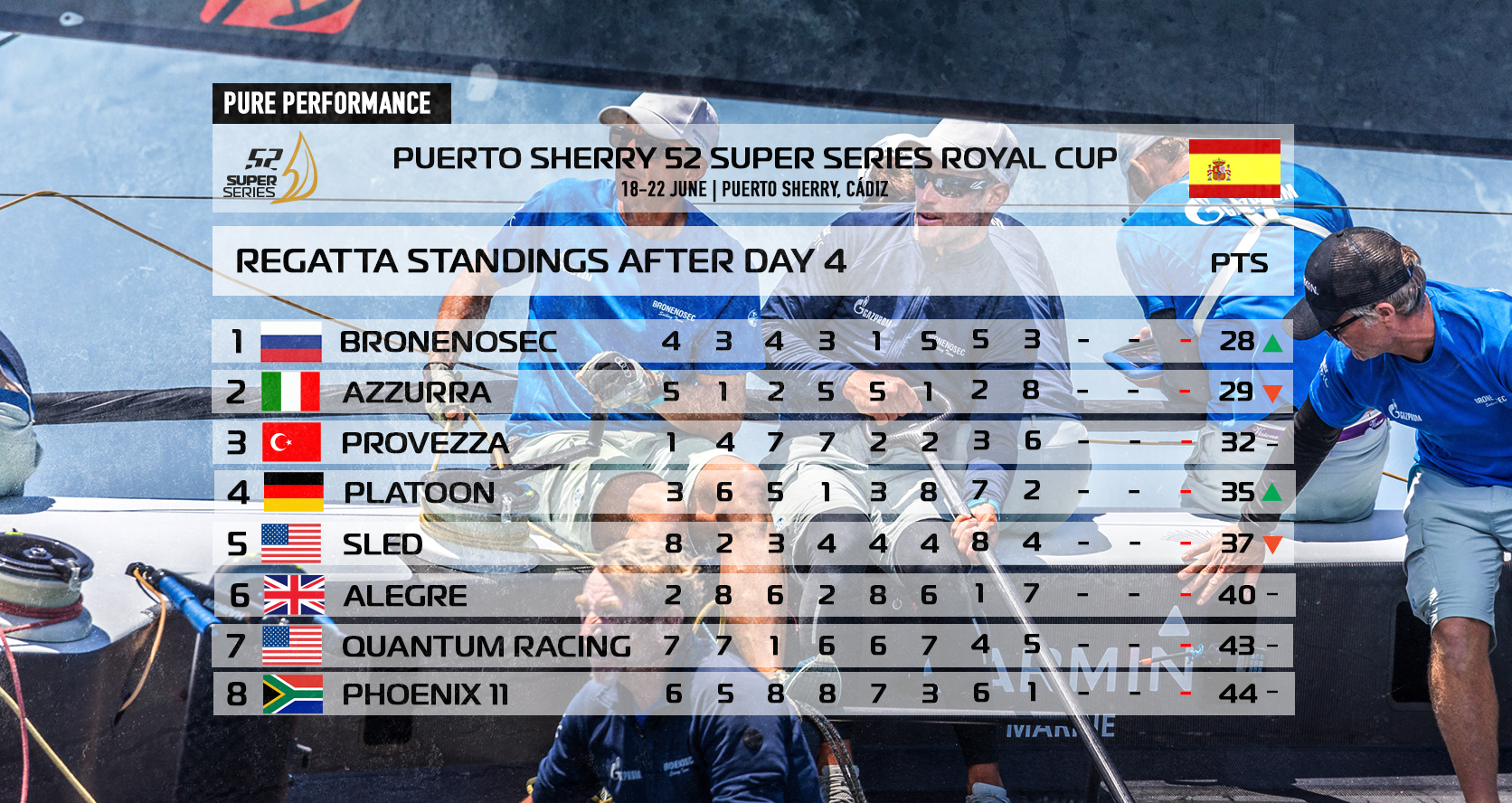