Propelled by their anger and disappointment at a performance in Capri last month which fell short of their best, Quantum Racing bounced back to win the AUDI TP52 WORLD CHAMPIONSHIP title from a very intense five race event on the beautiful waters of the Costa Smeralda, Sardinia.

The five day event lost two to very light winds but the five race series – two coastal races and three windward leewards – still felt like a marathon for many of the nine teams from seven different nations.

The waiting on the water was often as mentally taxing as some of the racing, not least today when the fleet drifted around for five hours waiting for a racing breeze to materialise. The hanging around, full of intent, was to no avail as there was no racing today.

Quantum Racing win the title for the fourth time, following up from 2008 in Lanzarote, 2010 in Valencia and 2011, also in Porto Cervo. Tactician Terry Hutchinson grinned:

The bounceback is fuelled as much by anger and rage!
Terry Hutchinson, tactician, Quantum Racing

The defending 52 SUPER SERIES champions, who also won the US 52 SUPER SERIES in their native USA earlier this season scored consistently well across the two coastal races and the windward leewards finishing no lower than third. They won the 31 miles coastal race and one windward leeward in their 1,2,2,3,2 scoreline to finish two points up on the fast emerging Brazilian team of Eduardo de Souza Ramos which has Santi Lange as tactician.

The new crew which only came together when the boat was launched in April, won twice on Friday’s windward-leeward course to finish one point ahead of Rán Racing, Niklas Zennström’s 2013 World Champions.

Double Olympian De Souza Ramos won the Owner-Driver award, leading a team which spans the age and experience range including Brazil’s 49er Olympic sailors, Volvo Round the World sailors and crew who have sailed with the owner in his previous Soto 40, Farr 40, Melges 24 and 32 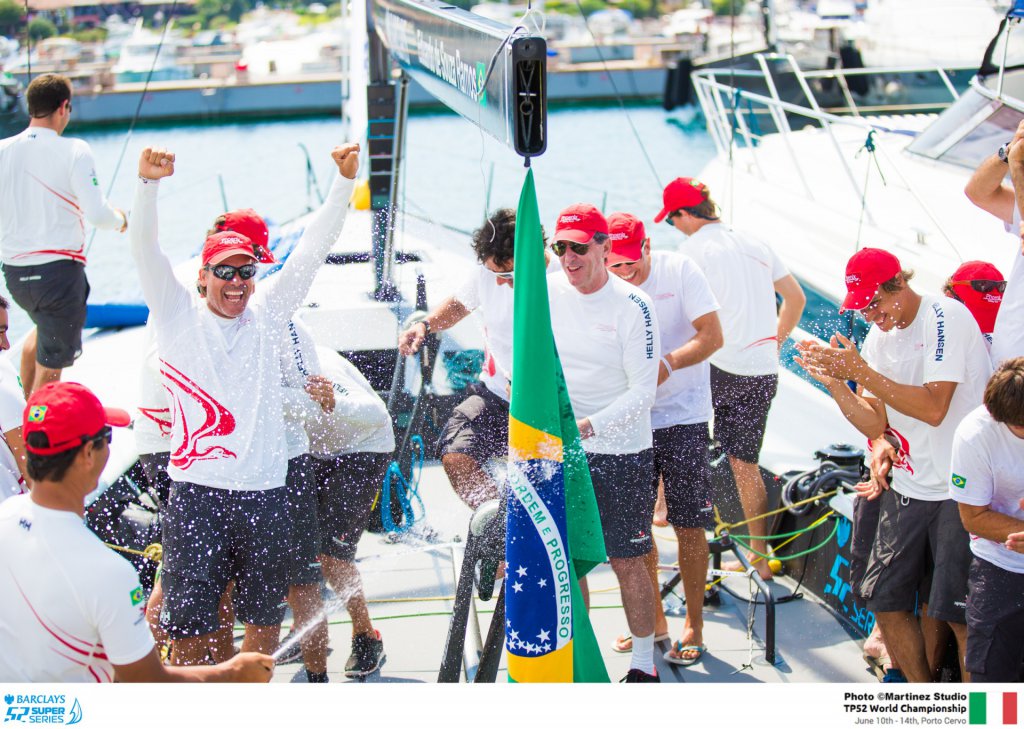 After the pressure of waiting in a transition zone, a calm, no go area where the confluence of the different winds kept the teams starved of breeze and on tenterhooks in the hot sunshine, thunderclouds building overhead just before racing was canned, back on the dock at the Yacht Club Costa Smeralda, with the beads of sweat still formed on his brow Hutchinson raked his hat back , scratched his head and revealed his relief:

These are without question the hardest days because you are waiting around, and know the severity of a bad race. The conditions are going to be challenging at best. And so I think that if you give out a game ball so to speak, you would give it to the race committee for their patience and perseverance and seeing the day all the way through. And at the same time through the course of the regatta never really running any marginal races. It was a great contest. And in the end we are just happy – probably more relieved than anything – that we sailed a good regatta.
The bounceback after Capri is what we are probably going to be most proud of.
Terry Hutchinson, tactician, Quantum Racing

In the end there was just three points between the top three teams, local favourites Azzurra who won in Capri slumped to a fourth place on their own home waters, carrying two fifths and a weighty seventh. Now they will be looking to match this Quantum Racing bounceback at the third regatta of the BARCLAYS 52 SUPER SERIES, Palma’s jewel in the Mediterranean Copa del Rey in early August.

With their win here and third in Capri, Quantum Racing lead the BARCLAYS 52 SUPER SERIES by three points ahead of Rán Racing who in turn are one point up on Azzurra.

These are without question the hardest days because you are waiting around, and know the severity of a bad race. The conditions are going to be challenging at best. And so I think that if you give out a game ball so to speak, you would give it to the race committee for their patience and perseverance and seeing the day all the way through. And at the same time through the course of the regatta never really running any marginal races. It was a great contest. And in the end we are just happy – probably more relieved than anything – that we sailed a good regatta. The bounceback after Capri is what we are probably going to be most proud of. We had a good, honest debrief and made some refinements to our gear.
We sailed a very traditional regatta in Capri, how we normally sail. And another boat sailed exactly the same way. And us and Vesper sailed very much the same regatta, but they were a click faster, and the domino effect of that played out through the course of the regatta. A lot of us on the boat had come off other regattas and so the energy level was low. We need to be up all the time for the racing and that was different. We probably cornered ourselves a little too far with our downwind gear and we have come back from that, more in line with what we know.
It has been a long regatta for five races, a really long regatta. But these marathons so to speak are grind fests. Every day we go out to prove something to ourselves. And that energy carries over to how we do our day, and how we manage ourselves, the crispness of what we do if you like, that was lacking the most in Capri.But now, it is goosebumps time. It is all good again. A great day.”
Terry Hutchinson (USA) tactician Quantum Racing (USA)

It feels really good. We are a new team, as I am always saying, but to be second here at a regatta like this is a very good result for the whole team. It is outstanding. I never knew how well we could do because we are such a new team with a new team. You always wish, you always hope, you always dream about it, but never know. I think trying to build confidence in the team has been important, try to keep the young guys in the team feel they are important in the process and have them involved in all the decisions, and taking responsibilities in their areas and so trying to build a team who can be tranquilo all the time but at the same time we have some very good sailors on board.
Santi Lange (ARG) tactician Phoenix (BRA)

It is frustrating to finish like this. You start off looking to sailing three races in the Mistral at the end of the week and it goes out like this. It is close with Quantum Racing just three points ahead going into today but in the end it was not to be. But you know what? Across the week it has been very close racing, fantastic. But it is unfortunate to lose two days here. We came here to win but in the end Quantum Racing sailed really well. Yesterday we were one metre over the line and that cost us some points. But we went in to this morning knowing we had a good chance but we really needed the races. We are happy with the way we are sailing. It does not show on the results perhaps but we are in second place on the BARCLAYS 52 SUPER SERIES standings just three points off the lead, we are feeling good. We lost out being over the line but on the other hand we did not have any high scores.
Niklas Zennström (SWE) owner-driver Rán Racing (SWE)