(Monday 15th May, Scarlino) – The current overall leaders of the 52 SUPER SERIES, the Roemmers family’s Italian-flagged Azzurra, laid down a marker for the Rolex TP52 World Championship when they led all the way around the course for today’s practice race off Scarlino, Tuscany.

Though the proud Latin team bowed to their usual superstition in bypassing the practice race finish line, the confidence of the crew that won the last regatta in Miami – in March – was suitably bolstered. 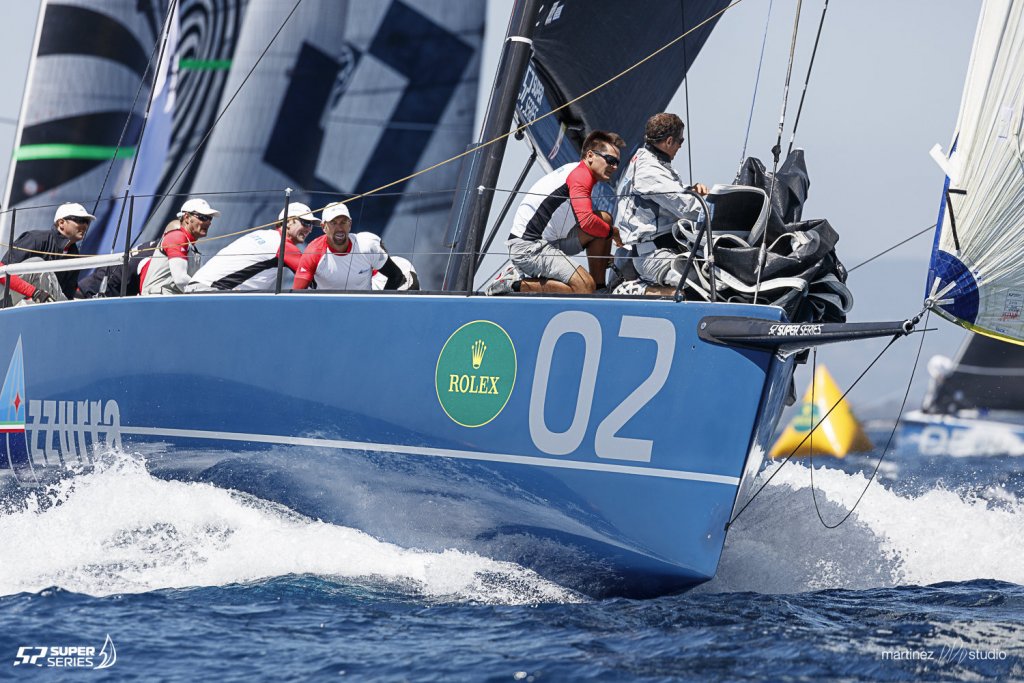 The reliable thermal breeze provided near perfect conditions for the final tune up dress rehearsal before the world championship starts Tuesday, in 12-14kts of SW’ly breeze. Azzurra’s Vasco Vascotto was first to key into the phase of the windshift pattern, and Azzurra squirted ahead early on showing good speed around the race course.

Bora Gulari, steering defending world champions, Quantum Racing, took the first gun, while Andy Soriano’s Alegre – which now has Andy Horton on as tactician – proved they may be in shape to repeat their second place in Scarlino last year, finishing second today. 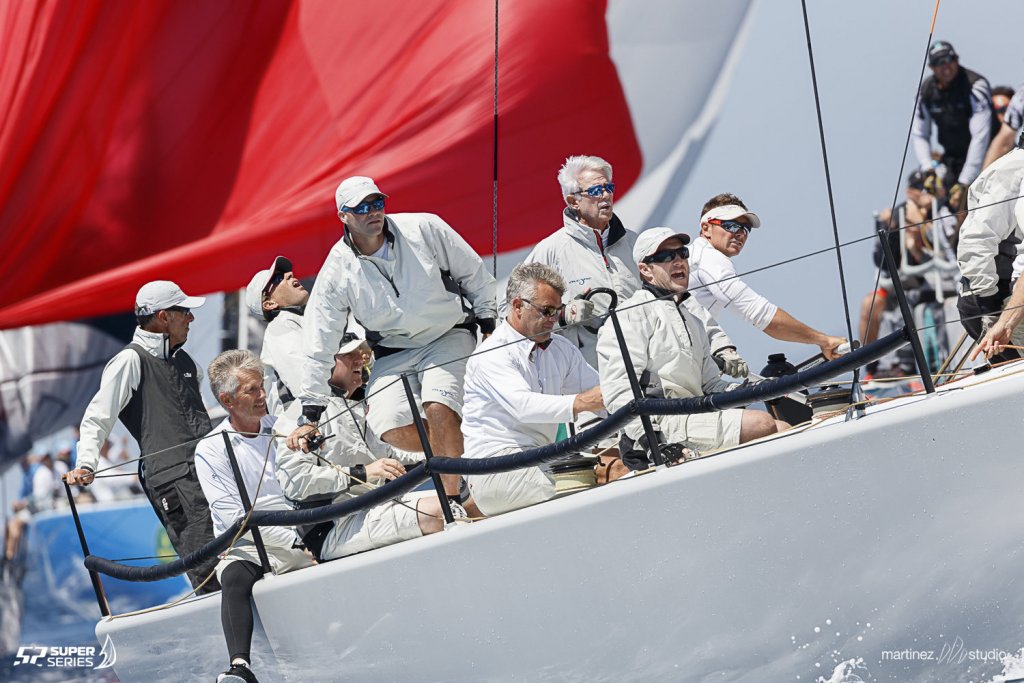 On the circuit’s second successive visit to the chic, purpose-built Tuscan marina resort, the waters off Scarlino seem set to offer a welcome range of varied conditions for the 10-boat TP52 fleet. The forecasts are promising. The winds are often influenced by the island of Elba, which lies six to ten miles to the SWW depending on the positioning and orientation of the race track, and also by the high land at the back of the Piombino promontory more to the north.

Tacticians, strategists and navigators describe this scenic NE corner of the Tyrrhenian Sea as one of the most challenging race courses to read anywhere on the circuit, perhaps ranked for difficulty along with Menorca, where Quantum Racing won the 2016 TP52 world title.
James Lyne, uber-coach to the Quantum Sails teams, Quantum Racing, Platoon and Gladiator unpicks the key elements of the race course and what is likely to be seen.

“There are two breezes here that compete with each other, one from the south west and one from the north west; coming round into the bay on different sides. So there are different race tracks with different, quite large geographical bends to the wind. And so when you sail up the track there are persistent shifts. It is all about working that out, how far do you go into it and what is the real layline? It is interesting.”

“But in saying that, tomorrow’s opening races look set to be in a gusty, offshore north easterly, up to 15 to 20kts. Then during the week we should see two scenarios of south westerly and north westerly winds.”

Teams have had a full five days of valuable training, including today. For the world champions Quantum Racing, that has included intensive starting practice for new helm Gulari.

“Initially that has been about working to improve acceleration off the line, but then, as other boats have come out to practice, more boat-on-boat stuff, but we are in better shape.” Coach Lyne reveals.

Fresh from repairs post Miami, Tony Langley’s Gladiator has proven quick during practice, more often than not among the top three during informal tests.

“The truth is, we still have a bit to go before we can be thinking about winning an event but we are making good progress. It will take time but now as you start to climb up the fleet a little bit, which we hope we are, now we have to know when to put the elbows out and when to fight hard for the tight spots. But the boat feels good and fast.” Ed Baird, Gladiator’s tactician comments, “The shore team and the team at Persico did a great job to get us here. We have been out every day that the rest of the group have been out and there have been no issues. The boat feels great. It has moments when it is really happy. Once we are fully pressed up in 10-11kts with everyone hiking, it is happy. It is very similar to Quantum. The nice thing for Tony is that it is a more forgiving boat, easier to find the right angles and keep the speeds up.” 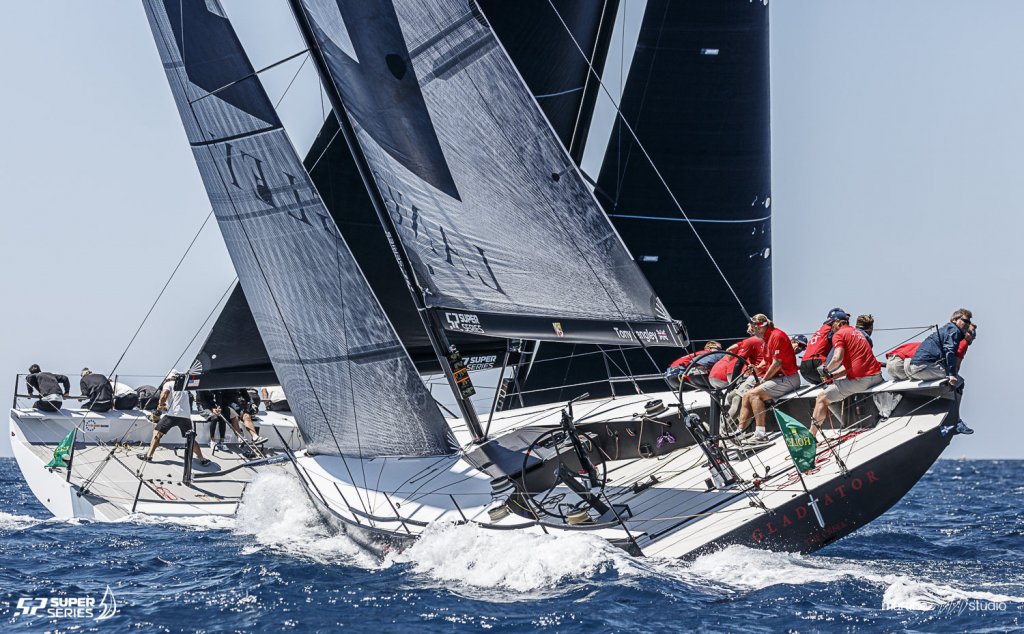 Gladiator, back in action.

The reality is that any one of six or seven teams could legitimately lay claim to the world title, margins between winning and a lower order finish are pared back to small errors here or there. Ergin Imre’s Provezza have been consistent this season and could spring a surprise; Soriano’s Alegre have always opened well in Europe, and Vladimir Liubomirov’s Bronenosec have all the hardware and personnel required to win.

Nic Asher, tactician on Peter Harrison’s Sorcha, guided Alegre to second here last year, and feels the cohesive, tight-knit Sorcha crew have made significant progress already this season. Supported now by double Olympic 470 silver medallist, Joe Glanfield, as strategist, Sorcha have upped their game. With such a high premium on starting, owner-driver Harrison, and some of the crew have been practicing close-quarters handling and getting off the start line on a pair of J/70s match racing out of Cowes.

“We have had good training, moving through all the things we wanted to work on after Miami, like the pre start, and down speed boat handling, these are things we have been working to get used to with. We are sailing well. I have a good idea what goes on here with the winds. You have to be decisive. I like it here. It is very chilled, the containers are close to the boats, the marina is nice and friendly, it is easy to get away for a bike ride in the beautiful countryside.” Asher said. 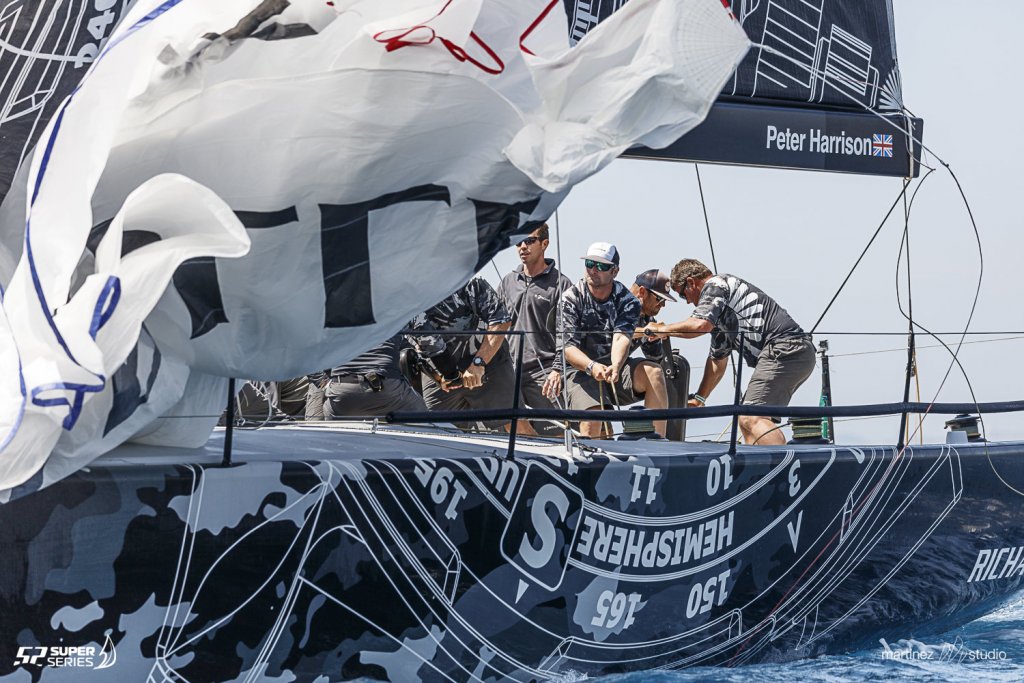 Sorcha enjoying their time on the water.

The Sorcha team are buoyed by a sail – and a bike ride – with cyclist Mark Cavendish, who lives locally.

“He came for a sail the other day, and we all went for a bike ride with him the other day. That was incredible. It was hard work on a 50k loop. We came out of one town on a bit of an incline, Andy Clarke being a bit boisterous speeded off. Cav went after him with one foot unclipped, pedalling with one leg and went straight past him. It was quite funny!”

Racing is due to start tomorrow at 1300hrs local time. Two windward-leeward races are planned. Live commentary and boat tracking via the Virtual Eye is available Tuesday and Wednesday. 52 SUPER SERIES TV goes live THURSDAY, FRIDAY, SATURDAY with live action streamed from the race course supported by tracking, commentary and analysis, starting from 15-minutes before racing starts each day. Here’s how you can follow the 52 SUPER SERIES.