Another Cascais Cracker on the Cards?

(Friday 12th July, Cascais) – Without fear of contradiction, the Rolex TP52 World Championship last year in Cascais, Portugal was the best regatta yet in the history of the 52 SUPER SERIES. It blew every day. The action was spectacular and the competition was super close. Quantum Racing won the world championship en route to securing the 2018 52 SUPER SERIES title.

The 52 SUPER SERIES is in Cascais for another wet and windy romance with the Atlantic – 🙏 praying for a repeat performance of last year's incredible TP52 World Championship! Racing starts Tuesday!

As the 52 SUPER SERIES heads back to the favoured Portuguese sailing destination, which lies just 35 minutes from the centre of Lisbon, there is considerable anticipation among the teams who are preparing to compete in the third regatta of the five that constitute this season.

To date, two different teams have won, Harm Muller-Spreer’s Platoon at the curtain raiser in Menorca and Ergin Imre’s Provezza in Puerto Sherry, Andalucia. Could there be a third different winner in Cascais?

To date Quantum Racing have won in Cascais twice – the world title last year, and in 2015 they secured the overall circuit title there – and Azzurra once in 2016. But the American-flagged tenants of both top 2018 titles – the TP52 World Championship and the series – go to Cascais on the back of what probably ranks as their poorest regatta finish since the start of the 52 SUPER SERIES in 2012. Seventh in Puerto Sherry was what team director Ed Reynolds describes as “a bit of a perfect storm scenario.”

“It exposed a lot of little details. We were plenty fast. We do not have any issues there. But what Terry (Hutchinson, title winning tactician) more or less invented was not trying to control everybody but just starting well and in a ten or 12 boat fleet to make sure that at three or four minutes to the windward mark you were in the top five, then take the opportunities to work up to a third if it came, and if not work to hold on to your fifth. But Puerto Sherry you could not be conservative. From memory, for example, a number of boats which won races were flushed out to a side after not so good starts.”

“But I think we go to Cascais with a lot of confidence. We were getting better in Puerto Sherry. But historically Cascais has proven a challenging venue. The conditions there really place a premium on execution, on boat handling and we are good at that. Things have to happen right, like getting off the start line and making the right approach to the windward mark, have to be just right.”

Correspondingly throughout the course of 52 SUPER SERIES history, no owner-driver has won in Cascais, it has always been pro drivers that have won. That is not just about the prevailing strong wind and waves, often there can be awkward leftover swell, crossed with choppy seas and an unstable breeze.

“It’s hard to say you don’t feel comfortable with Ed Baird on the helm in Cascais!” Reynolds smiles. And one key change for Cascais will be the return of super coach James Lyne for the regatta.

But just as Quantum Racing are right at home at a venue that has been good for them in the past, it is the same feeling for most of the top teams. They all love the breeze and the waves.

Azzurra are still searching for their first regatta win since Menorca at the end of the 2017 season, but they have the strength and experience to deliver a win in Portugal and have led both of the first two regattas of the season.

“We have always done well in Cascais, a close second last time. Last year we turned a bit of a corner there after being not so good in Croatia. We are always good in the breeze. I think that comes with having been together for so long and not making any changes. This season we have been stronger across the whole wind range, we are much more all round,” says Azzurra’s strategist Cole Parada. “But as far as winning regattas go, it is all about the season title. That is what matters. We know it can go to the last race and the last day, so we are all about chipping away, making improvements rather than winning a regatta. Any win along the way is a bonus.”

The 2019 season will pass its midway point halfway through Cascais. Provezza go into this third event with a two-point lead over Platoon, while Azzurra are third five points behind the Turkish-flagged team with John Cutler driving.

“For us on Provezza right now it is important not to get ahead of ourselves,” warns trimmer Simon Fry. “We need to focus on the good points of what we have achieved at the first two regattas and just make sure we don’t put ourselves in a position where we pick up a last place.

I think both the Vrolijk boats should be competitive in Cascais – ourselves and Platoon. Last year we both had our problems in the strong breeze and waves, but we have a boat that feels completely different, which we can now push hard downwind, when last year it let go at least once, and which was sailing us rather than us sailing it,” Fry confirms.

One technical change that will be interesting will be Platoon’s choice of adding a second aft pedestal that allows the crew weight to be effective further back in the boat.

“But, look, Cascais is not an easy place to sail at all. I think Azzzurra will be strong, Quantum Racing always do well there and Platoon should be good too. Don’t forget also that Alegre were good in Cascais last year. And the other thing now is that there is much more posturing and manoeuvring against your nearest rivals. On the first beat you are nearly always keeping an eye on them,” Fry concludes.

The new Bronenosec was in contention for her first regatta title going into the last race last month in Puerto Sherry. They have changed to a new downwind trimmer, Russian Anton Sergeev, a Melges 32 world champion with a lot of TP52 experience.

“We need to be strong on the downwind trimming in Cascais. As usual we go with a lot of enthusiasm, but the level is very high, so as far as winning a regatta goes, we go with every intention but just keep our feet on the ground, taking it day by day and race by race. Who makes less mistakes will be the winner. Hopefully our new boat will have a little bit more in the breeze than everyone else,” says Alberto Barovier, project manager and bowman on the Bronenosec.

Both regattas this season have been won by Vrolijk designs – Platoon and Provezza, in light to moderate breezes. But the strong winds and seas in Cascais exposed some weaknesses. Rolf Vrolijk is confident their designs will profit in Portugal:

“I can only say that we are confident that the performance will be good. From what we have seen up to now the downwind performance in surfing conditions of our boats is still one of the best and the helms of the boats are dinghy sailors they do know how to push the boats in those conditions. Upwind a lot of the relative performance will depend on how well the trimmers will be able to keep the boats going in wavy conditions. It will all depend on trim, how you can de-power the boats and have a well-balanced boat to keep it going in those conditions, but to still have the high mode options.” 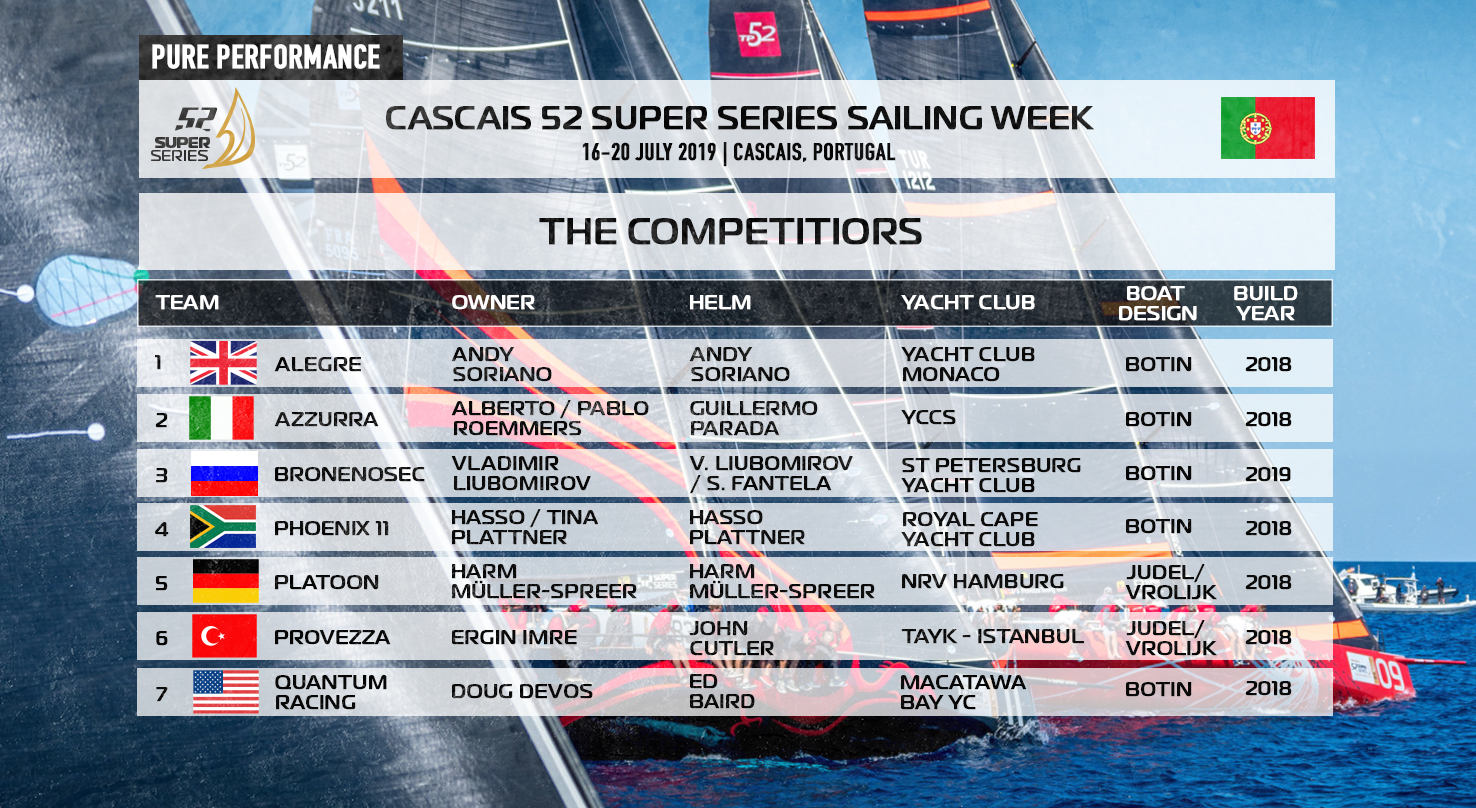