(Wednesday 25th April, 2018) – Christened in Valencia on Tuesday Andy Soriano’s new TP52, Alegre, represents a key component in the team’s drive to find a new, higher and more consistent level of performance on the 52 SUPER SERIES. Even though they had a disappointing 2017 season, badly compromised after their mast broke during the Porto Cervo, Sardinia regatta, Soriano’s passion and drive remains undimmed, as his desire to continue to keep getting better. Rather than remain down or disheartened with things last season, he rung changes and started planning for 2018, one of the first to commit to a new boat build.

The preparations for the new season are at full chat, making best use of every minute before next week’s warm up test, Mallorca’s Sail Racing PalmaVela regatta where ten TP52s, including seven new boats will compete. Alegre have been testing and training along with partners Sled, who they have formed an open book alliance with to share data and ideas as they seek to improve together.

Alegre is one of the very small group of teams that have the potential to do great things, the talent and the tools to win regattas, and finish on the podium for the season, but they just need to maintain a higher level of season-long consistency. Make no mistake, they are a very hard working team that has been striving to keep getting better. In their quest to improve starting and boat-on-boat tactics, they have undertaken several match race style sessions in smaller, fast keelboats. And, going into May’s first 52 SUPER SERIES event in Croatia, they plan to do the same again to ensure they are sharp and ready for anything.

Andy Soriano commented at the launch of the new Alegre, which was built by Chimo López and his team at Longitud Cero in Castellon, near Valencia:

“The 52 SUPER SERIES level can only get higher. But we all want to keep improving, and with new teams coming in, the competition will certainly be as intense, and probably more intense. As we have seen, the boats have all become more even, as we saw last year. I expect that this season will be very much the same. You will see different winners for different events.

We have had an awesome few days of training in Valencia. We have only really scratched the surface of the performance of the new boat so far, just learning about the heel and rudder angles, the mast and rig settings, but in general the Botin designs are very much ‘plug and play’.”

The difference between the new generation of Botin boats and the Interlodge, I think, is very much at the back of the boat: the exit. Interlodge was maybe a little stickier downwind, so there has been some work done on the transom. All in all, though, they are a big step from the 2015 boats.

On Interlodge, we were the first to move the rig back (10cm), which gives the boat a bit more helm. You can load the crew at the back quicker, it brings the keel and mast closer together; closer to the centre of gravity. And now I am sure all the new Botin boats are the same. Otherwise when you look at the new (Botin) boats they are very, very similar. It is down to the details. Some have the Jon Williams (stayinphase) winch package, and some Harken; there are different traveller lengths, some are more complex and with more adjustments, some are less complex. Sled, for example, seem to like to keep it very simple. We are on the other side of things.

I think all the appendage packages with the Botins are almost the same. We were the first to commit where other teams have been later, but I don’t think there is much difference. The masts are the biggest difference even though they all come from Southern Spars, the stiffness and the detailing is evidently different.”

The Alegre/Sled programme is already working well together, Sled working with Rod Davis and Murray Jones, and Alegre have Grant “Fuzz” Spanhake in the coach boat, all sharing information.

“We are sharing everything, data, pictures, drone footage and debrief, together. We will swap trimmers and sails. It is working well and there is a great feeling between the teams.”

Alegre have made some changes to their line up, bringing in trimming partnership Andy Hemmings and Jon Gunderson, while Noel Drennan moves to the mainsheet. North Sails’s Kevin George moves to the runners where he can get more of an overall view of the sails and rig. They will sail with 14 as they were slightly under weight at times last season. 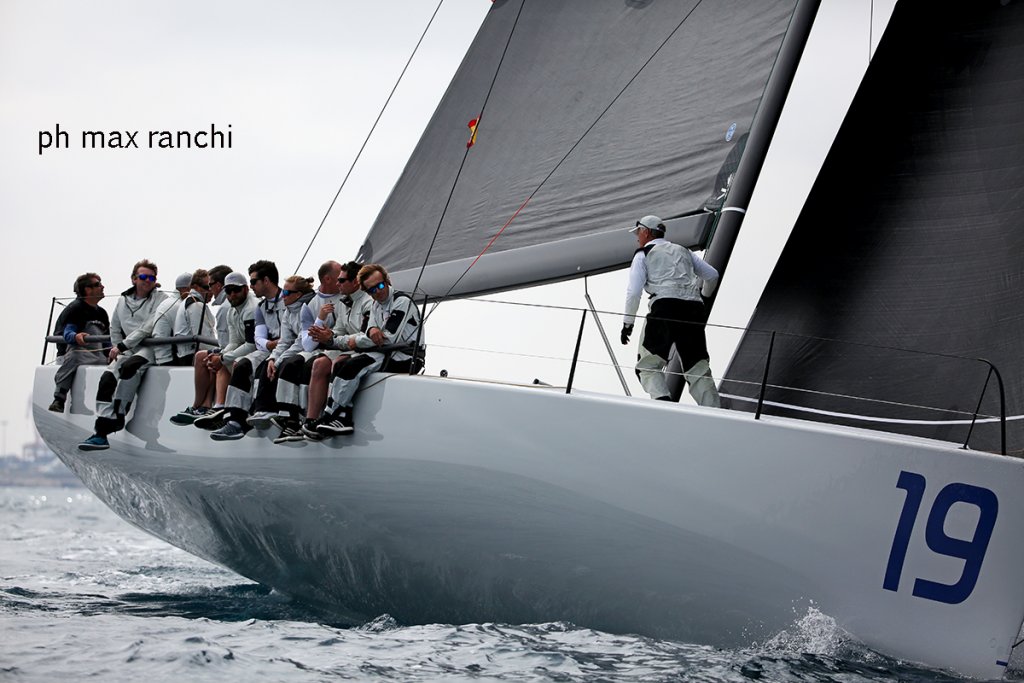 Horton evaluates last season and looks ahead to this coming series:

“I joined the programme at the worlds in Scarlino and we were good there, fourth and just missing third. Then we lost the rig in Sardinia and it was really tough from there. We never found the speed with the replacement rig, we were OK in flat water but not good when it was bumpy. We focused a lot of energy in just getting the best out of it, but in the end we really just started to focus on the new boat. We had two regattas when we were off the pace after Sardinia. We worked hard and we worked diligently to get quicker.”

As for their ideal target for 2018 he concludes:

“Best owner-driver for the season would be great and achievable. If we could get there then I think the result for the season looks after itself. Our goal is to be nothing less than competitive, to be in the top group. But Andy is relaxed about it, he is super excited about the new boat and the season ahead. He is very realistic. And we have a really nice group of guys, all genuine, nice people all excited to work together and with Sled.”

Share this article:
News Overview The 52 SUPER SERIES and Ecoworks Marine Team Up to Protect Our Seas 2020 Vision
Alegre Sled