(Friday 27th September, Porto Cervo) –   After three excellent races on the penultimate day of the season, during which both main title protagonists found themselves near the back of the fleet once and unable to recover, it is the host club’s emblematic Azzurra that will carry an 11 point advantage onto their home race arena as they seek to close out their fourth 52 SUPER SERIES championship title.

If it was a red letter day for Takashi Okura’s Sled, sailing to a second followed by two wins, to take themselves to the cusp of their first regatta title in more than five years on the 52 SUPER SERIES circuit, the heavyweight title match between Azzurra and Platoon swung two and fro during three exciting windward-leeward contests.

With Olympic champion Santi Lange calling tactics for skipper-helm Guillermo Parada, Azzurra seemed to falter in the first light wind race, finding themselves on the wrong side of the course and seemingly unable to match Platoon for speed. At the first top mark, Harm Müller-Spreer’s German-flagged world champions led and Azzurra were eighth and ninth at the first top windward mark. A strong run got them to sixth but in the busy traffic they lost two places. So Platoon immediately wrestled six points back from the 11 point cushion the jittery looking home team had taken on to the water this morning.

The breeze increased only very slightly for the second race of the day, up to 10 knots on the start line. Azzurra proved much more composed as they chased the white-hulled Sled round the track, the Okura’s mainly Kiwi core team showing impeccable execution and smart tactical calls from Adam Beashel and Murray Jones, which allowed the experienced owner to showcase his speed and skills on the helm. But while Azzurra looked much more at home – even selling Platoon a useful dummy gybe on the first run – Müller-Spreer’s team kept the pressure on the Italian-Argentine crew.

The third contest of the day was the best for breeze and a typically left-sided Porto Cervo course that saw nearly half the 10-boat fleet stacking above the layline and losing distance, creating a very busy and noisy windward mark rounding. Sled were already well clear of their action, seemingly uncatchable today, while Azzurra nailed their layline perfectly, which gave them second round the mark.

Platoon were not so fortunate, slowed significantly in the traffic at the turn, and this time – just when they needed to be pressurising the circuit leaders – it was the world champions who rounded sixth.

Losing two boats down the last run, Platoon now need a repeat of today’s first race, if they are to fulfil their ranking as the early season favourites to take the crown from 2018 champions Quantum Racing.

The only team to have won two regattas this season, Platoon, should have the maximum last gasp opportunity to restore their chances of a first season championship as three races are scheduled for the last 52 SUPER SERIES Super Saturday of the season. The forecast is for lighter breezes than today, which might yet play to the strength of Platoon who won the world championship last month in Mallorca in light, shifty sea breezes.

“At the beginning of the day we made life complicated for ourselves after a bad race in very unstable conditions, at the same time Platoon won that one, so that was a stressful moment. At the same time we stayed focused on our jobs and at the same time the breeze picked up and the races were a little bit more logical and we were able to pull together two solid races. We need to be pleased that maintained our circuit lead and with three fewer races hopefully we can do enough tomorrow,” said skipper-helm Parada.  ”We had a decent start in that first race on the second tack we had a mechanical problem on one of our tacks and so we lost a lot, we lost our position relative to Quantum and with that we lost our chance to be with the leading pack.”

“So if it is light and shifty on the last day you really need to sail your own race and pray for the best. If it is more stable then you can maybe control a little more. But 11 points is an advantage that is better to have on your side, but it is definitely not over until the last finish line. There are still options to play and so hopefully we will play them well.”

“We had a great day. Our first race we could see some pressure on the left and just hung in there until we got the left shift and fortunately came back across in good shape and got around just behind Platoon and sailed well after that. Next two races we had pretty nice starts and controlled, tacked across at the right time and the third race was pretty interesting as we got a jump and there was that massive pile up behind us at the top mark. We were clear and just watched it. We never thought we had any issues with speed, in the light and the breeze it just feels good all around.” 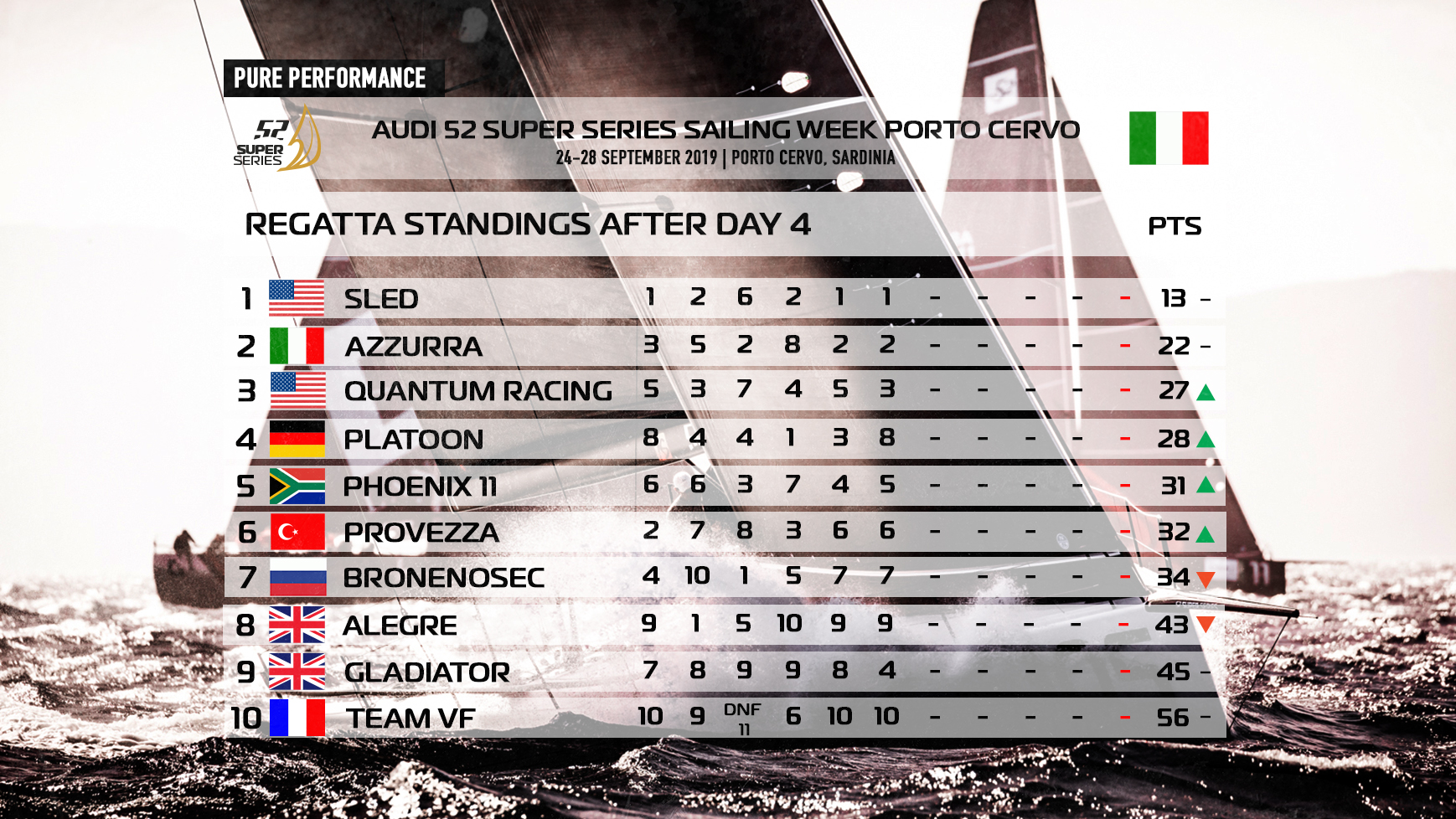 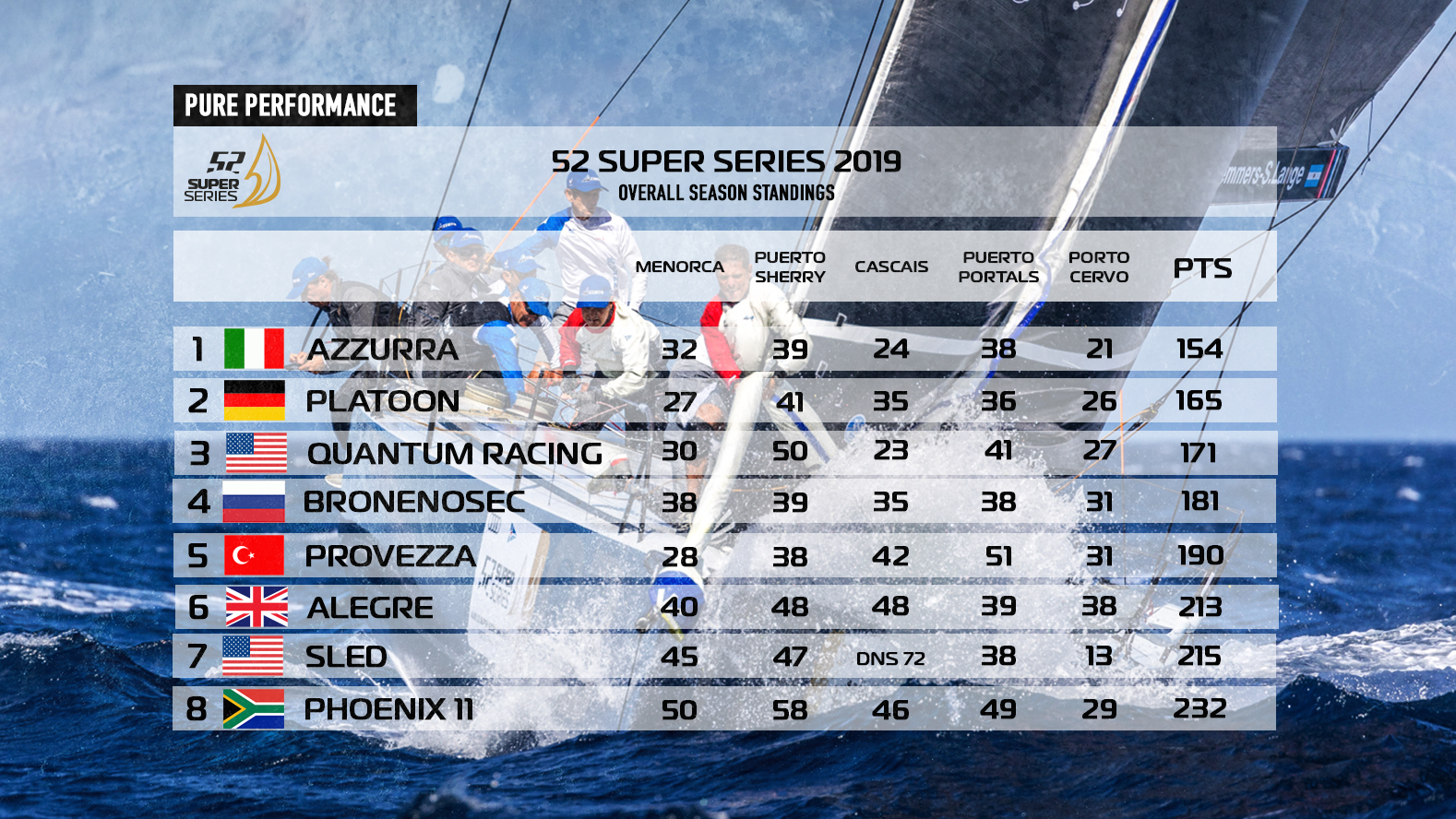