A Three-Cornered Title Bout Next Week in Mahón

(Friday 15th September, Menorca) – Next week, Menorca – one of Spain’s Balearic Islands – will see the closest and most exciting finish yet to a 52 SUPER SERIES season. For the first time since the world’s leading monohull circuit started out in 2012, there are three teams that have an almost equal chance of winning.

After five of the season’s six international regattas, spanning Key West, Miami, Scarlino (Tuscany), Porto Cervo (Sardinia) and Puerto Portals (Mallorca), Azzurra lead into the Menorca 52 SUPER SERIES Sailing Week with a lead of just three points ahead of 2017 World Champions Platoon, who in turn are only three points ahead of 2016 champions Quantum Racing. 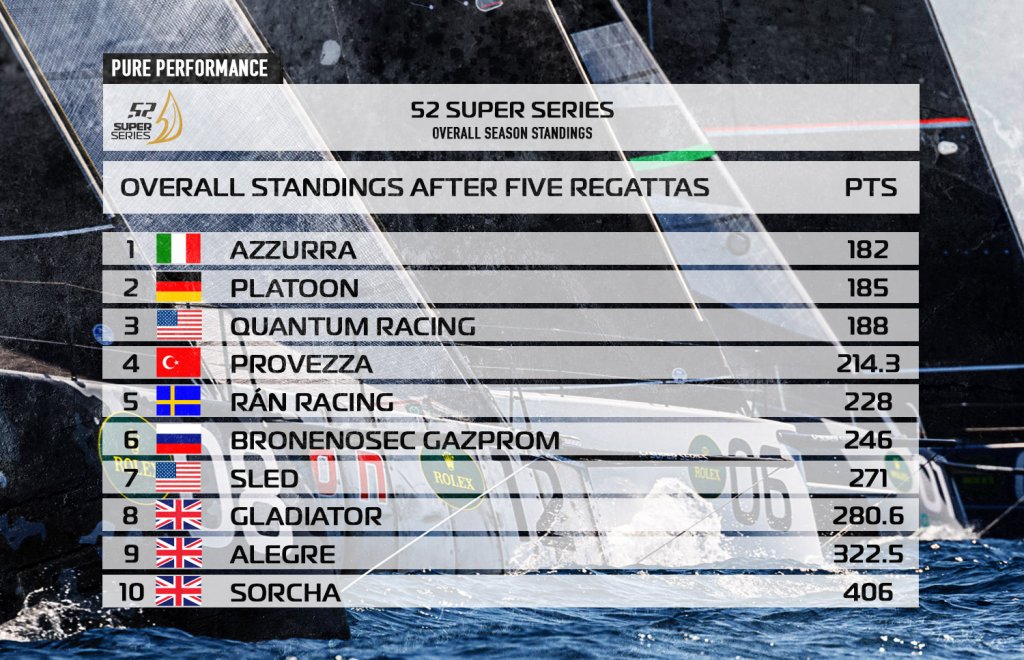 Each of the three teams represent different philosophies. The fiery, passionate Latinos, Azzurra draw their crew primarily from Italy and Argentina, and have already won the circuit twice, in the inaugural year 2012 when the 52 SUPER SERIES comprised four European events, and at the conclusion of an exciting 2015 year.

Sailing under the stars and stripes of the American flag, Quantum Racing are the hard driving, no-stone-unturned perfectionists who most acknowledge to be the circuit’s benchmark team. Under owner-driver Doug DeVos and tactician Terry Hutchinson, the Quantum Racing Team are a talent-laden crew who have won the circuit in 2013, 2014 and 2016.

But this year has seen a third team emerging to break up the dominant duopoly. Germany’s Harm Müller-Spreer is a world class helmsman who has carefully engineered a smooth-running, super-consistent international team, sailing under the German flag. Benefiting from working hand-in-hand with Quantum Racing for two years now, Müller-Spreer has the ultra-consistent, unflappable American John Kostecki on tactics supported by Spain’s America’s Cup and Olympic gold medal winner, Jordi Calafat.

Since finishing fourth in 2015 and again in 2016, the German owner-driver set out to build a team really capable of winning the 2017 circuit, and to arm the Platoon crew with the hardware to do the job.

“Look, obviously we want to win and are out to win and but really if we finish on the podium this season we will be happy. To already be World Champions of 2017 is an unexpected success and if we were to win overall that would be the icing on the cake.” Contends Müller-Spreer.

Quantum Racing’s Terry Hutchinson pulls no punches when it comes to stating what they have to do in Menorca next week, but he believes it is mostly about small refinements and improvements. In Puerto Portals, Michele Ivaldi replaced strategist Bora Gulari who was racing at the International Moth Worlds.

“We do have to start better than we did in Puerto Portals. That was our Achilles’ heel there, and so we will be working hard on that in the lead in. Michele and I have to just refine our communications a little bit more. In the first part of the week we did find ourselves in some new positions where we did not really want to be, but the in second part of the week it was working well.

And Mahón can be a challenging venue in certain conditions when there is an awkward sea state and that can be a challenge for Doug. But we have talked among ourselves and agreed that we don’t have do a whole lot of things a lot better, it is about small refinements.”

But Quantum Racing, as much as anyone will know there is no room for error. Last year when they went into the Mahón TP52 World Championship regatta with a solid points gap in second, they spent much of it on one start line error when they fell foul of a Black Flag Penalty. 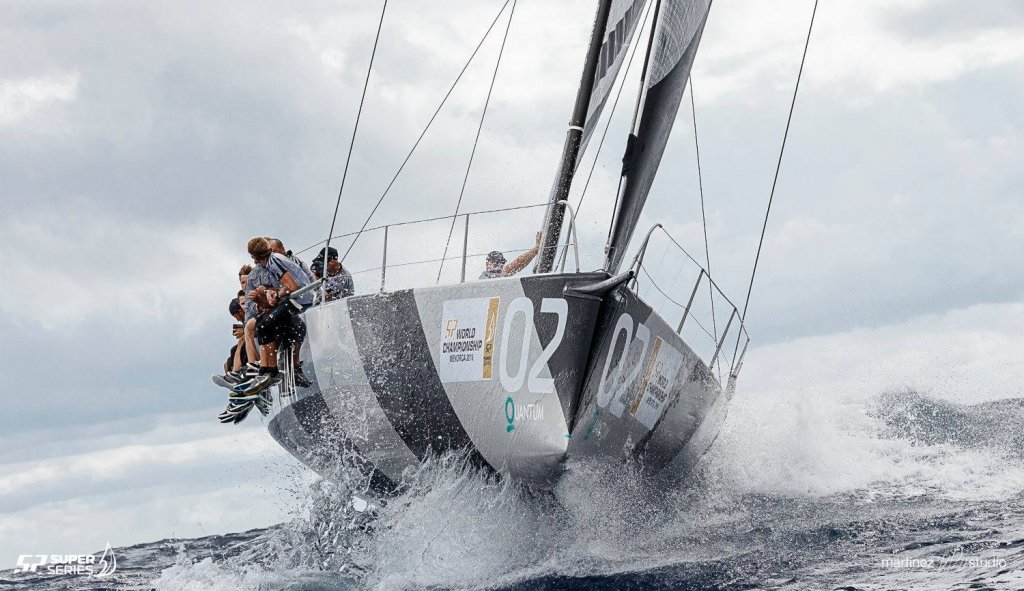 Quantum Racing racing at high speed in Mahón in 2016.

We must not get tunnel vision, focusing only on Platoon and Azzurra. I think that any team among us that races that way will falter. Without doubt if we go out to sail our best and win the regatta then I think the season win will take care of itself.”

Comparing the underlying philosophies of the three contenders, Hutchinson affirms:

“We are about no stone unturned, we are about always looking to improve, getting better each and every day. As soon as we stop improving each day, we lose.”

But it is Azzurra who hold the slenderest of margins into the Mahón “Super Finale”. Skipper-helm Guillermo Parada:

“We are looking to go there and do our own thing, to really avoid the highs and lows and sail consistently. We need to sail smart and to really double check all our decisions and measure them with care. There is no room for errors now.

We enjoyed Mahón last time. It was bumpy at times after the frontal system we had, but I think we have prepared well for everything. We have a setup for that that we are confident with, with new sails.” 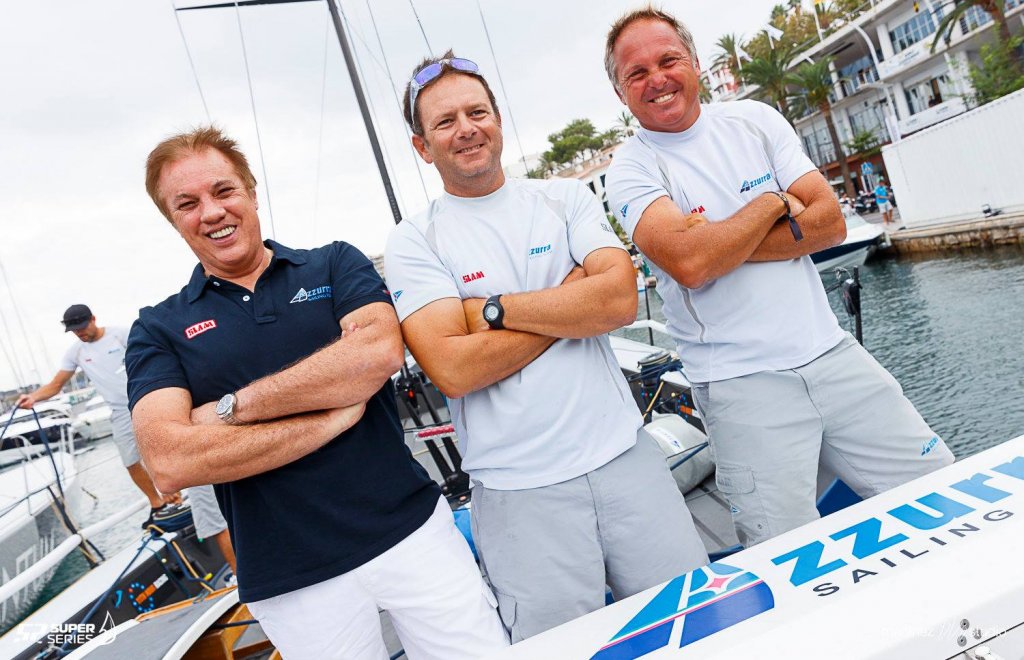 And proud Argentinian, Parada, speaks of their reputation as hot-blooded Latinos:

“We are by nature a lot more impulsive than other teams. We have to make that work in our favour and curb it some of the time. It can play against us and we let ourselves down. So we will settle down and just do our jobs. We know we are a very good, very solid team, all very good around the boat. We need to minimise the hot moments and concentrate on not making mistakes.”

Eleven TP52s will compete at the Menorca 52 SUPER SERIES Sailing Week. Already there are clear indications that there will be a number of new teams joining the circuit in 2018, some stepping in with new-build boats in the light of the recent America’s Cup news. But Ergin Imre’s Provezza team arrive in Mahón fresh from their first ever 52 SUPER SERIES regatta win and will be all out to make it two in row, even if it seems a big ask to close a 26.3pts gap to steal third place on the overall standings. But the battle for fourth is close between Provezza, 13.7 points up on fifth-placed Rán Racing and 21.7 points ahead of Bronenosec, who see the return of Italy’s Francesco Bruni to the 52 SUPER SERIES.

Racing starts with the official Practice Race on Monday 18th September, with points scoring from Tuesday onward. On the final three days of racing (from Thursday through to Saturday), live 52 SUPER SERIES TV will be broadcast direct from the water coupled with expert commentary and analysis. Shows start 15-minutes before racing, and can be enjoyed via the 52 SUPER SERIES homepage – www.52SUPERSERIES.com – or via the app. Never miss a beat. Virtual Eye boat tracking and audio commentary will be available from the start of the regatta.

On the commercial side of the 52 SUPER SERIES, the grand finale will welcome guests from all around the world. Energy Drink Partners, XS Energy, have invited 40 partners from South Korea, Japan and Europe to enjoy the 2017 52 SUPER SERIES season showdown.

And XS are also sponsoring one of the stand out social events of the season, Saturday night’s “XS Season Blowout,” the notorious 52 SUPER SERIES end of season party.