(Wednesday 11th July 2018) – The 2019 52 SUPER SERIES season promises two pivotal events on the open Atlantic as the world’s leading grand prix monohull circuit is hosted in June next year by Puerto Sherry on the increasingly popular Bay of Cadiz race area for the first time in the circuit’s eight-year history. The circuit then moves directly to Cascais, Portugal in the quest for an exciting Atlantic summer showdown.   The Atlantic facing Bay of Cadiz arena opens on to the Gulf of Cadiz and is renowned as one of Southern Europe’s best racing venues. Over recent years it has become one of the most popular training waters for leading Olympic classes and national teams because of its reliable winds and immediately accessible open waters. Puerto Sherry are hosts to the second 2019 52 SUPER SERIES event from 17-22 June.

The area was put on the global grand-prix sailing map by the 2003 ISAF World Sailing Championships and since then has hosted a number of high level international events, most recently the Finn European Championships, which provided some of the most spectacular big-wave racing images of this season so far. The reported average daily windspeed is 14-18kts and the prevailing local winds are the easterly Levante and its westerly counterpart, the Poniente.  And for family and friends who enjoy following the 52 SUPER SERIES, the beautiful, historic city of Cadiz is on the doorstep.   The 52 SUPER SERIES CEO Agustin Zulueta introduces Puerto Sherry:

“It can be a tricky race course with currents, tides and over the regatta we can expect to see different wind conditions.”

Puerto Sherry will be the second event of the season, following on from an opening in May in Menorca, a favourite destination for the class, where the passionate organisers in Mahón will welcome back the 52 SUPER SERIES for the third time.

If this 2018 season has started with back-to-back challenges in Croatia’s gentle winds, next year promises a counterpoint as the fleet stays in the Atlantic and heads to Cascais, Portugal in July where the mid-summer winds and open sea conditions are almost always some of the best in Europe.

The 2019 Rolex TP52 World Championship will return to Puerto Portals as a summer highlight for the chic, popular Balearic marina from 19-24th August.

The climax of the 2019 52 SUPER SERIES will be a return to Sardinia to the ever popular Yacht Club Costa Smeralda from the 16-21st September, where a spectacular end of season party will round off the year in appropriate style.

“We have worked hard to offer a series of venues that work well in terms of a range of different wind and sea conditions over the five-event season. So it is exciting to be going to Puerto Sherry and for the first time to be having two back-to-back Atlantic events to form the middle of our season, but this is an owners’ circuit, and we listen to their preferences – a season that does not max out the logistic and travel requirements, but still offers new challenges is good news for 2019.”

“At first sight the 2019 schedule is not that different from other years predominantly in the Med. But with two locations on the Atlantic coast and two in the path of the Mistral, potentially it will be quite a challenging year, both for boat optimisation as well as the actual competition. With most boats by then being one year old, and well sorted, there will be less distractions and no holding back from Race 1. All in all, quite a different game in 2019.” 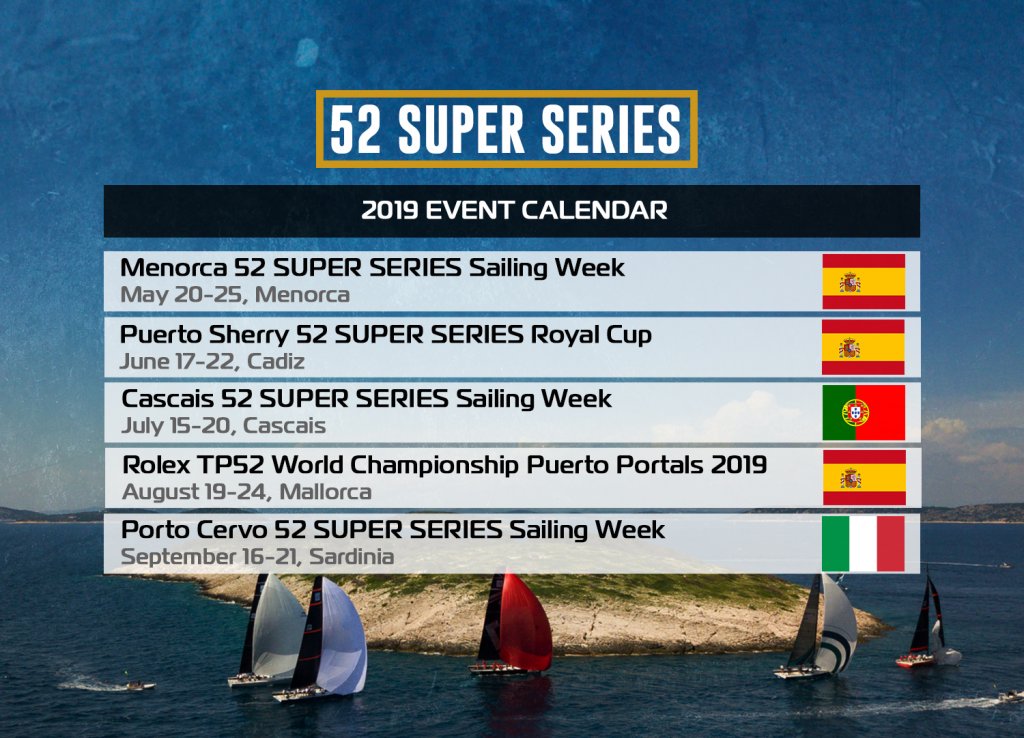