The 52 SUPER SERIES Is Setting Trends In Sustainability

(Wednesday 8th October, 2017) – By partnering with 11th Hour Racing in early 2015, the 52 SUPER SERIES made a formal, public commitment to tackle its carbon footprint head-on, and begin working to minimise its impact on the environment. Fast forward three season to where we are now, and today, the 52 SUPER SERIES has exceeded its own expectations and is setting trends in sustainability. A hot topic, sustainability has gained its own momentum, and is embraced by competing teams, as well as local host organisations and partners. The 52 SUPER SERIES is changing minds and visibly making a difference wherever it goes.

Over the last few decades, the exploitation and degradation of our planet has gone up at an alarming rate. And whilst there is now a real public consensus about the fragile state of things, more often than not, good intent doesn’t translate into meaningful action. The 52 SUPER SERIES has been fighting to break that cycle by coupling positive messages with the power of sport. As a team of sailors who love and respect the sea, protecting the racing arena was a natural place to start.

It began with an official announcement, quickly followed up by the formation of a host agreement set out to align 52 SUPER SERIES host venues with certain environmental standards, such as waste management. Competing teams were immediately notified about the new strategic direction and encouraged to send a representative to the newly-regular sustainability meetings. The 52 SUPER SERIES joined the Green Sports Alliance, and worked hand-in-hand with 11th Hour Racing to develop an all-encompassing sustainability plan that addressed each layer of the organisation.

With new eco-friendly foundations, the newly appointed Sustainability Team started driving forward. In the public fight against single-use plastic, the 52 SUPER SERIES has completely removed plastic from its entire operation. No longer is plastic found in lunch packaging, included in lunches as cutlery or distributed by way of grab-and-go water bottles. A model for all sports, this alone has withdrawn a possible 60,000 bottles from circulation.

But plastic is only the tip of the iceberg. So too, have organisers found ways to improve the water supply, waste policies, food provision, fuel usage, materials and transport provision. The list of individual initiatives and policies employed by the 52 SUPER SERIES is really quite extensive, and three years down the line, it’s clear that other people and organisations are now seeing this, listening to the arguments, and carrying the important message forward in their own lives. 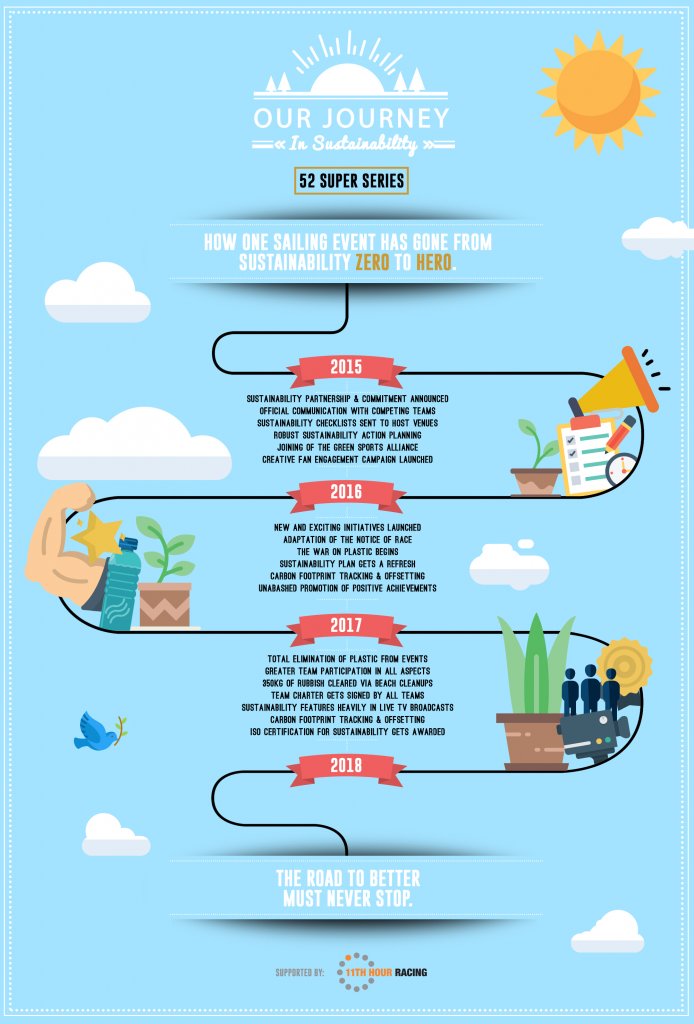 Sustainability Director for the 52 SUPER SERIES, Lars Böcking, reflects on the progress made:

“We are a small, but passionate team who are learning every day. We are incredibly proud of the progress we have made over the last three years. It is our goal to reduce our environmental footprint to nill, or even better: leave each place in better shape than the way we found it, but there is still some way to go.

Regarded as the best monohull racing circuit in the world, the 52 SUPER SERIES is a hotbed of top class sailing talent. All eyes are on us. We will reflect on the good work we have done and continue in our important role as influencers in sustainability.”

Given the success of the practical elements that make up part of the Sustainability Plan, the 52 SUPER SERIES is now very much focussed on the next steps, on using its influence in new ways.

For example, the 52 SUPER SERIES management tracks, and subsequently offsets its carbon footprint by donating a calculated sum to environmental good causes. This year, that money has gone to charitable projects in Kenya, Ghana and India. In the last few months, the sustainability team has achieved ISO certification for its best practice programme management. The various departments of the 52 SUPER SERIES are also committed to the idea. The media team regularly include sustainability in their daily highlights videos and live TV broadcasts that go out to millions of viewers across the world. These are just three of many ways in which the crew are building credibility, leading by example and very much setting the trend.

With the recent announcement from Emirates Team New Zealand that the 36th America’s Cup will be raced in monohulls, and the return of many Cup teams to the 2018 52 SUPER SERIES season, the Sustainability Team are more motivated than ever to continue leading the charge at the forefront of sustainability.