First Among Equals –  Azzurra On Top On Home Waters.

While different boats won both of the first two races of Sardinia’s Settimana Delle Boche, the second regatta of the 2015 52 SUPER SERIES, as much as glittering race wins may contribute, it was the ability to grind back through the fleet from poor early positions which define the top two positions after the first day of racing on the Costa Smeralda.

Azzurra lead Quantum Racing but only on countback, both sharing the same seven points aggregate after two windward leewards in 5-8kts on NE’ly breeze.
Azzurra’s share of the regatta’s best points tally is as much due to their fight back to convert an eighth to a sixth in the second race as it is to their convincing, gun to gun victory in the opening contest. Equally for Quantum Racing, converting fourth to third in the first race and a sixth to fourth in the second heat showed the real regatta winning DNA of the 2014 52 SUPER SERIES champions.

The light NE’ly breeze proved difficult to read. When usually it is the surrounding topography which influences the wind in this easterly end of ‘Bomb Alley’, today a big cloud formation over the adjacent island of Corsica, to the north, proved to have a big effect on the wind, more so on the second race when a corresponding swing to the left gave a good early gain to those who seized on this trend earliest.

But it was Azzurra, the emblematic home team which proudly flies the flag of the YCSS who are looking to repeat their Settimana Delle Boche regatta win of 2013, which made the strongest start. Tactician Vasco Vascotto and the crew – with Alberto Roemmers Jr sharing the driving duties with Guillermo Parada – made a great opening to the first race, working the initial right hand wind shift to perfection and were able to lead around the first windward mark.

When the breeze rotated on the second beat they were able to strengthen their lead ahead of Jean-Luc Petithugeunin’s French team on Paprec which scored their best result of the season in second. They stayed focussed and calm when Quantum Racing put them under increasing pressure down the final run, but held on for second.

The second race saw a complete volte face. The boats which were last and second last in first race were among the pacesetters early on. Bronenosec, Vladmir Liubomirov’s Russian flagged team were a disappointing ninth in the first race, compounding a poor start with a desperate second beat when they ended up on the wrong side of the right side wind shift. But in the second start they, along with Tony Langley’s Gladiator were able to use the left shift rotation first as it came across the course.

Gladiator lead around the top mark first time up but gybe set along with the next three boats while Bronenosec bore away, found better pressure in the early part of the run and then a better angle to come back to lead Langley and his crew through the leeward gate. So it was a good recovery for Bronenosec after Race 1, while Gladiator’s third added to sixth in the first race sees them third overall.

Quantum Racing were back on song. The return of the talismanic Terry Hutchinson may have lit the blue touch paper with his verve and relentless drive, but credit to Doug DeVos, the owner driver who had not steered a TP52 for 18 months and took the helm of his new 2015 boat in his first real ‘series’ race and contributed significantly to their smooth sailing. As Hutchinson observed wryly, ‘Day 1 is about surviving’ and they did better than that, as did Azzurra. There seems every chance they will reprise their rivalry on the coastal courses which were so spectacular in recent years.

After two races it remains incredibly close only seven points separating first from ninth and three points between first and sixth. 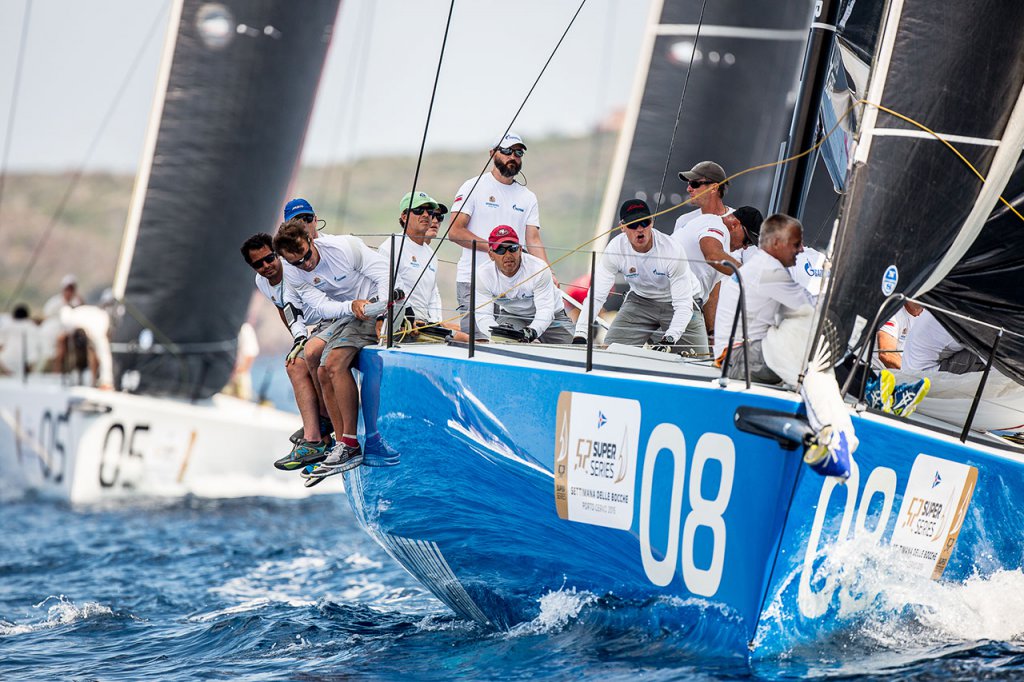 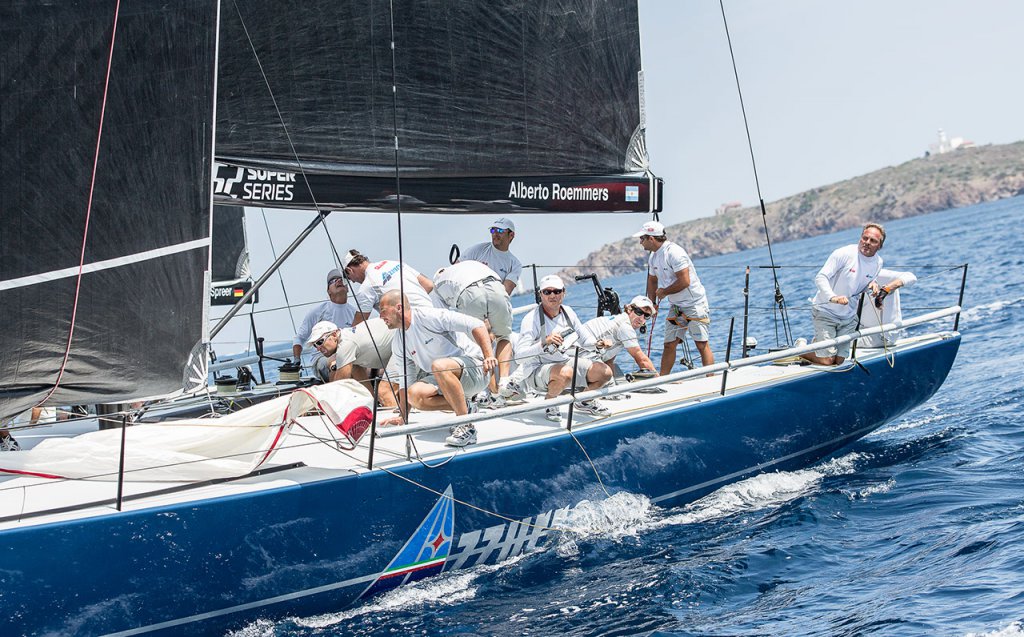 The goal today was to come away with eight points or less on the day and so we achieved that. First race we had agood start, second race we had the spot we wanted and then the breeze stayed a little bit further left than we were expecting. But we did nice work clawing our way through the fleet, that is kind of indicative of how we are going in the lighter stuff. Doug did unbelievable work for not having sailed a boat in 18 months. You could not ask for more. We did not lose the regatta today. The first days are a little bit more about surviving so that when you get to the business end of the event then you have an opportunity.
It was incredibly tricky. The first race we got a nice start in the middle of the line, Azzurra got a good start and were just to weather of us, both of us tacked together. They played the first right hand shift. We clawed back to third which was good. And in the second race there was a big cloud which had appeared over Corsica and there was a big discussion on the boat as to whether or not the breeze would stay in the left or whether it would go right, and in the end we concluded it would go right. It went further left and so we did nice work to claw our way back to fourth in that one because it was looking pretty bleak in that one. But it was way tricker and much more subtle than you would expect.  I do put a lot of pressure on Doug. It is very succinct and very exact communication. He is a high performing guy in his own world. He has high expectations. I know the thresholds. He grew up as a footballer and an athlete. We have sailed together enough to know how hard to push and when to throttle it back a little. I would say one thing we did well is that in teh pre start I am working with Doug and getting him set up, and Ado then is very much the tactician who in many ways, he is so good we just ask which side…
Terry Hutchinson (USA) tactician Quantum Racing (USA)

“We are glad to come away with a win after such a bad first race. The strength of this group is that after the first race we just reset the memory, contral alt delete, and start from zero again. It is such a tough fleet and today’s results show that everyone is right there within four or five points. There is nothing in it.
Typically where we were racing today is very geographically influenced but because there was a big cloud over Corsica which came in and out the wind has been strongly affected, and so the typical geographical pattern is not there. There were big windshifts and it was really, really open. There were a lot of passing lanes and in the second race we managed to get our bow in front and then control.
Michele Ivaldi (ITA) tactician Bronensec (RUS)

I think in the second race was not a bad race for us. We had a bad, unlucky lane after the start, we had a nice start but we did not go so well on port for the first few minutes, we dropped to leeward of Quantum Racing and then we dropped to last but it was a good race to recover positions which was difficult. To survive a day like that and come in leading you are happy, if you cry after a day like that where are you?
I’m happy to be able to dedicate our win in the first regatta to Luciano Giacomi, who has sadly passed away. He was a good judge, a reference point for many of us. I was lucky to work with him as Rules Advisor in the America’s Cup. Luciano was a straightforward person, the kind of man I like, and we’ll all miss him.

As far as today’s racing goes, our recovery in the second race shows, as far as I’m concerned, that we know how to sail competitively. The first race was easy enough to win after an excellent start. We controlled it from the beginning to the end, but the second saw us recover positions from the back of the fleet and that wasn’t easy. We got a good start, but the breeze shifted suddenly to the left and that put us in a bad spot. Recovering places when there is really only one course to follow isn’t easy, but we were able to limit the damage. I took a tactical risk in the last downwind leg and didn’t really gain from it. In the future I’ll have to be more careful. One first and one sixth place finish work out to a good average and for now we’re tied for the lead with Quantum.
Vasco Vascotto (ITA) tactician Azzurra (ITA)