(Friday 9th December, 2016) – The 52 SUPER SERIES is globally recognised as the world’s leading grand prix monohull racing circuit. As the competition has steadily grown in recent years, so too has its approach and commitment to reducing the environmental impact of the event. The 2016 season represents the second complete year in partnership with sustainability sponsor 11th Hour Racing, and in 2017, green-minded circuit organisers will further build upon the great strides and notable achievements made over the past two years.

In 2015, the 52 SUPER SERIES made a commitment to introduce new initiatives that would start to change the way that staff, sailors, marinas and yacht clubs would interact with the environment whilst on-site. This conscious shift in thinking was further refined for the 2016 season, when key team members of the 52 SUPER SERIES operation aggressively targeted the core elements of their event property: the water supply, waste policies, food provision, fuel usage, materials and transport.

Reflecting on the 2016 campaign, Lars Böcking, Sustainability Director for the 52 SUPER SERIES explains:

“It has been a very special year for us, both on and off the water. We’re very proud of what we have achieved in 2016, and feel that it’s incredibly important to be taking action on these issues now, whilst there is still time to do something about them. Every day at every regatta represents another opportunity to make a difference. You only need to think about your children and your children’s children to stay motivated.

On the face of it, we are doing lots of small things very well, but together they represent something bigger, and we hope that other events and other marinas are starting to listen as the message builds momentum. Because it’s only together that we can really make a difference to our sport, and ultimately – our environment.”

The list of policies and initiatives employed by the sustainability team is a long one, and one that penetrates every level of the organisation. In addition to those already outlined, the team has also: placed a high maxim on media exposure; promoted the use of eco-friendly boat cleaning products; operated shuttle bus services to reduce the amount of wasted fuel; provided oil spill kits for teams; organised cycling events to promote sustainable transport; and integrated sustainable practices into everything they do and buy, from only printing on 100%-recyclable paper to reusing event signage and cable ties. 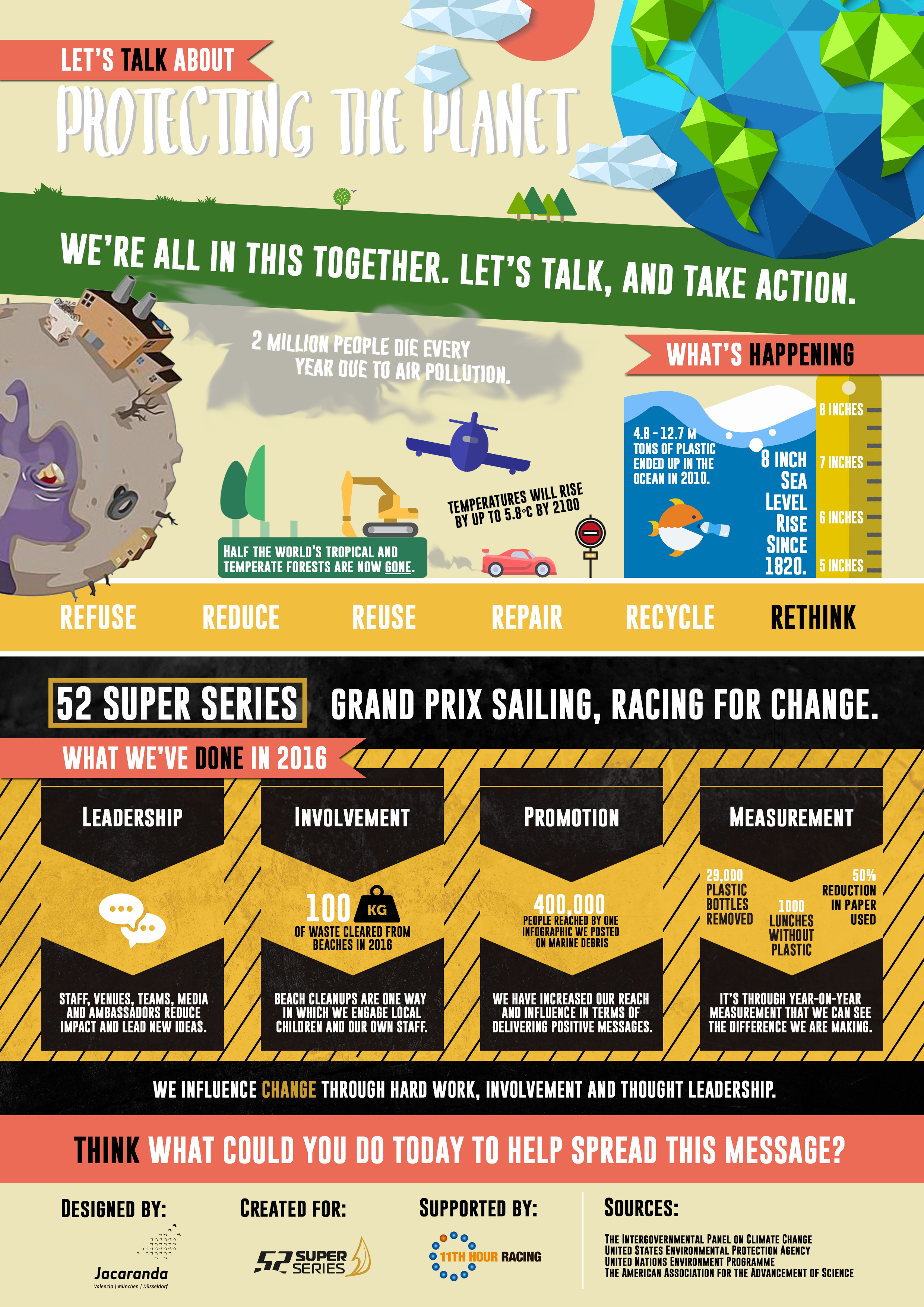 “Since our partnership began in 2015, sustainability has become a core operational standard of the 52 SUPER SERIES across all key areas of impact. New for 2017, the 52 SUPER SERIES will include sustainability requirements in venue contracts, an important progression that will influence lasting change in the communities that host the events. 11th Hour Racing is building strong partnerships around sustainability, and innovating new models of sponsorship where the power of sport engages wide audiences in protecting and enjoying our oceans.”

The 2016 52 SUPER SERIES season will be remembered for many reasons, not least of which for the great strides made in terms of sustainability. The 2017 season will mark the third year in collaboration with sustainability sponsors, 11th Hour Racing, and with a successful season behind them, the 52 SUPER SERIES will once again be committed to pushing forward the boundaries of sustainable action within the sport of sailing, and beyond.

About 11th Hour Racing
11th Hour Racing harnesses the power of sport to increase our understanding of the oceans, find innovative solutions to the issues that impact our marine resources, and promote stewardship and sustainable use of the seas.